The front of the store just after fire. (Courtesy of D. Doyle)

Similar view – from front of store. (Courtesy of D. Doyle)

View of side room.

Wood donated from historic structures makes the store stronger than before.

Antique items on ceiling. Many were salvaged from 1997 flood and placed in storage.

A fire may have destroyed the historic Rabbit Hash General Store, leaving only three partial walls and a darkened floor, but that was enough to keep hope alive.

Within a week of the fire on Feb. 13, 2016, local leaders in Rabbit Hash, Ky., organized and began planning to rebuild. Through fundraising, devotion and hard work, the store was restored and reopened a little more than a year after the fire.

Located on the banks of the Ohio River near Cincinnati, Rabbit Hash is a village known for its antiques, artists and community gatherings. 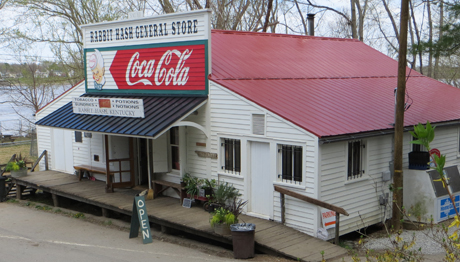 The centerpiece of the town is the general store, established in 1831 and listed on the National Register of Historic Places.

Donations large and small poured in from across the country, including a Duke Energy contribution of $25,000. Fundraisers also reaped another $30,000, and thousands more were deposited into a store restoration bank account, much of it anonymously. But it was primarily the time and talents of community residents that produced a festive grand opening of the recreated general store on April 1, 2017.

“While this heartbreaking fire may have destroyed a building, it enkindled a resolute spirit among strangers,” said Jim Henning, president, Duke Energy Ohio and Kentucky. “I’m in awe of the selflessness of the entire Rabbit Hash community – and the friends who lent a hand from near and from far.”

The new general store looks like the old one, having been built to exact specifications. As visitors enter from the raised walkway, they quickly feel the flex of the original wooden slat floor. It serves to unite the rustic past with the hopeful mood of the recreated store. 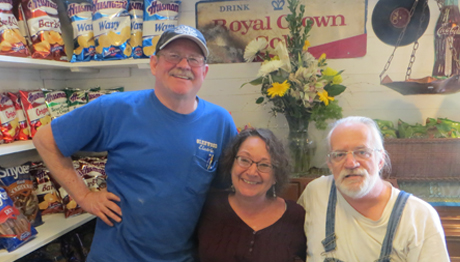 Because parts of the old building were used to recreate the new store to precise measurements, the Rabbit Hash General Store was able to stay on the National Register of Historic Places.

Don Clare, Rabbit Hash Historical Society president, praised all those who helped turn tragedy into triumph. “It’s everything to me. I’ve never experienced anything so pleasing and satisfying as this. It’s like a dream come true thing,” Clare said. “It just proves what people can do if you get together and have one agenda and stick to it. That’s the greatest thing about it.”

The frigid evening of the fire shocked neighbors and friends of Rabbit Hash. But fear was quickly replaced by hope as no one stood around for long. “When I first saw the burnt store, I wasn’t sure it could be rebuilt. But I quickly gained strength knowing we would all come together," said Bobbbi Kayser, board secretary of the Historical Society. "When I finally got to sit do

wn after the opening, it felt like it always had. It felt so good. We get to continue to be that oddity in America that most people never get to experience.”

How night baseball came to Cincinnati in 1935

Whatever happened to Reddy Kilowatt?