Reds General Manager Larry MacPhail flipped a switch on May 24, 1935 and turned on 632 floodlights and spot lights at Crosley Field. Photo courtesy of Robert Payne.

At precisely 8:30 p.m. on Friday, May 24, 1935, President Franklin D. Roosevelt pressed a Western Union telegraph key in the White House and an electric pulse traveled 500 miles over telegraph wires to a signal lamp near first base at Crosley Field in Cincinnati. 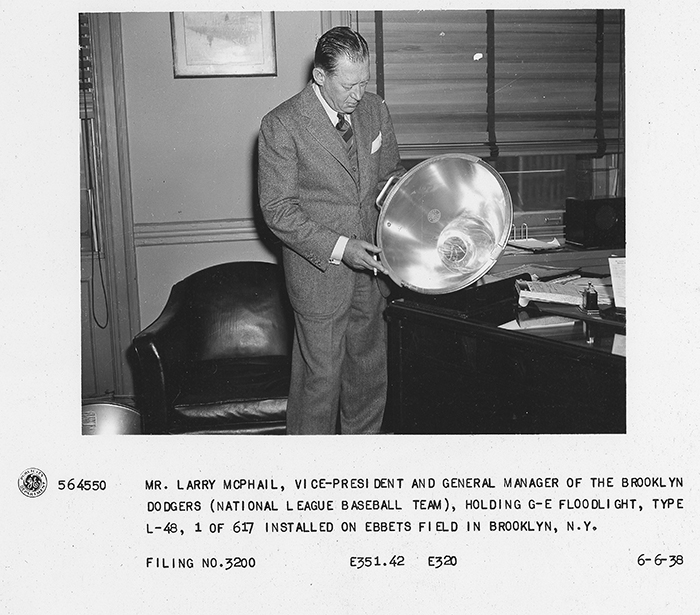 Cincinnati Reds President Larry MacPhail received the message, flipped a switch and 632 floodlights came on. The crowd of 20,422 let out a huge roar. A new era in major league baseball had begun: night games.

Night games had been played in the minor leagues, as teams discovered that even the financial difficulties of the Great Depression didn’t stop people from coming to games and, baseball under the lights often doubled and tripled attendance.

Seeing the success in the minors, MacPhail received permission at the December 1934 National League meetings to introduce night baseball in Cincinnati. 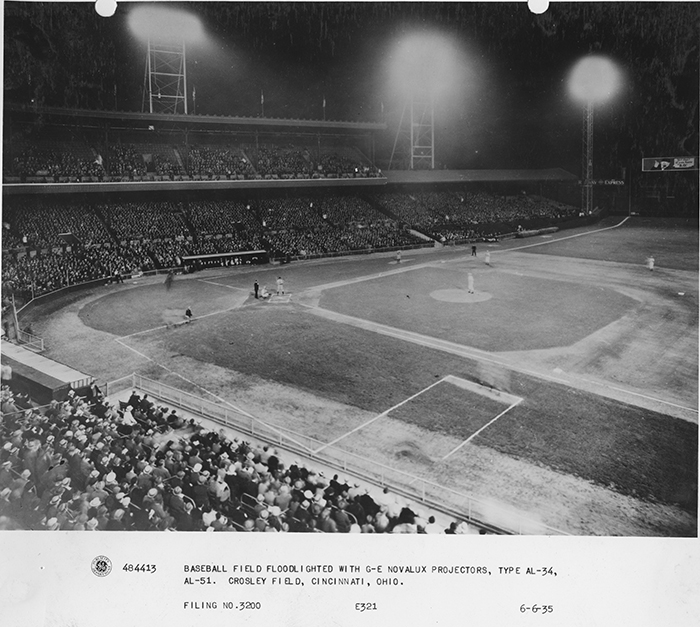 This team began their work in January 1935. Their tools back then included slide rules, illuminometers and Payne’s collegiate engineering textbooks from the University of Cincinnati. Among the problems they needed to solve: the number and combination of floodlights and spotlights, as well as the height and number of light towers.

They worked on the layout for nearly four months before the CG&E drafting department drew up the blueprints. GE erected the towers and installed the Novalux floodlights.

Then the real world intruded on their calculations.

Payne and Rutterer had to climb ladders up and down the 115-foot tall towers numerous times to make modifications to the lighting array. So, add courage to creativity.

In fact, Payne’s son Robert wrote about his father’s efforts in a book about the history of night baseball, “Let There Be Light: A History of Night Baseball 1880-2008.”

“I cannot begin to comprehend the fear that must have been going through my Dad’s mind as he firmly gripped each wrung of the ladder and gingerly put one foot after the other on the next succeeding rung, before finally … reaching the grandstand roof.” 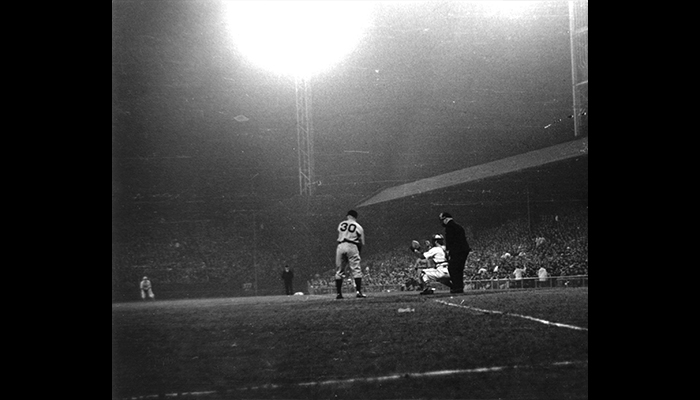 Finally, after several weeks of testing, it was time to play ball.

National League President Ford Frick threw out the first ball on that cool May evening. The Reds defeated the visiting Philadelphia Phillies 2-1 behind the six-hit pitching of Paul Derringer. Of course, the score was a historical footnote to what was achieved that evening. The reviews from players and fans were positive, and night baseball was here to stay.

After seeing the success in Cincinnati, other teams followed. Ebbets Field in Brooklyn under MacPhail’s leadership was the next park to have night games, in 1938. By 1948, all but one major league park had lights. The Chicago Cubs waited until 1988 to play under the lights at Wrigley Field. Today, about 66 percent of all games are played at night.

“Thanks to the efforts of CG&E employees Earl D. Payne, Charles Young, Al Rutterer and Wayne Conover,” said Robert Payne, “major league baseball was changed forever – in Cincinnati and later all over the country.”