Reddy Kilowatt image on glass courtesy of the International Lineman's Museum and Hall of Fame in Shelby, N.C.

Reddy Kilowatt’s charm and magnetism made him a household name across America for six decades. But now, the retired energy company mascot is mostly a memory and object of eBay auctions.

Reddy was created in 1926 when Ashton B. Collins Sr. of Alabama Power saw a bolt of lightning that looked like a little man. Collins drew a spunky caricature that became an adored symbol of electricity to children and adults.

Power companies paid a licensing fee to use Reddy Kilowatt as their mascot in their advertising, truck logos and marketing plans. At first, Reddy helped people embrace the expanding concept of electricity. His charm made him a household name that lasted generations. Jingles were commonplace: “The weather, the weather, what's it gonna be? Here is Reddy Kilowatt to show you on TV!”

Children dressed up like Reddy Kilowatt for Halloween and some followed his holiday recipes for cakes, puddings and rolls.

Chris Hamrick, Duke Energy corporate archivist, said Reddy was used by Duke Power from 1935 until the 1980s. Many energy companies started to retire Reddy Kilowatt in the 1980s. 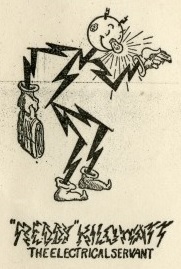 This rendering of the corporate symbol "Reddy Kilowatt" is excepted from the registered trade-mark granted to Ashton B. Collins, Sr. by the U.S. Patent Office on March 28, 1933.

“The image had been used for such a long time that more and more utilities began to drop his usage and began to use a more unique branding and marketing strategy,” Hamrick said.

Mark Johnson, who works in the Wholesale department at Duke Energy in Charlotte, N.C., inherited many Reddy Kilowatt items from his great uncle and aunt. Johnson’s office shelves are lined with the items as well as ones he added over the years. His most prized Reddy Kilowatt is a recognition award that he bought on eBay.

Today Reddy Kilowatt is owned and licensed by Xcel Energy. And although only a handful of companies still use Reddy Kilowatt in their marketing, the 90-year-old is still a popular character among the people who remember him. Lamps, clocks, war bonds, cuff links and light switch covers featuring Reddy Kilowatt’s image are available on eBay.

Florida Power welcomed Reddy Kilowatt in 1939. He made his first appearance at a May meeting of the Florida Power Club.

Cincinnati Gas & Electric Company owned a tugboat named “Reddy Kilowatt” in the 1970s. The boat featured a large image of the mascot on its port and starboard sides.

Carolina Power & Light had a 1960s-era Dodge “Reddy Van” featuring Reddy’s images all over. Its purpose is unknown, but interesting!