In a field of power poles outside of Raleigh, N.C., Tyler Pound was ready to climb. On Brandon Gills’ signal, Pound snapped to action, fastening leather climbing spikes around his lower leg before pulling himself up a pole to practice rescuing an injured lineman. 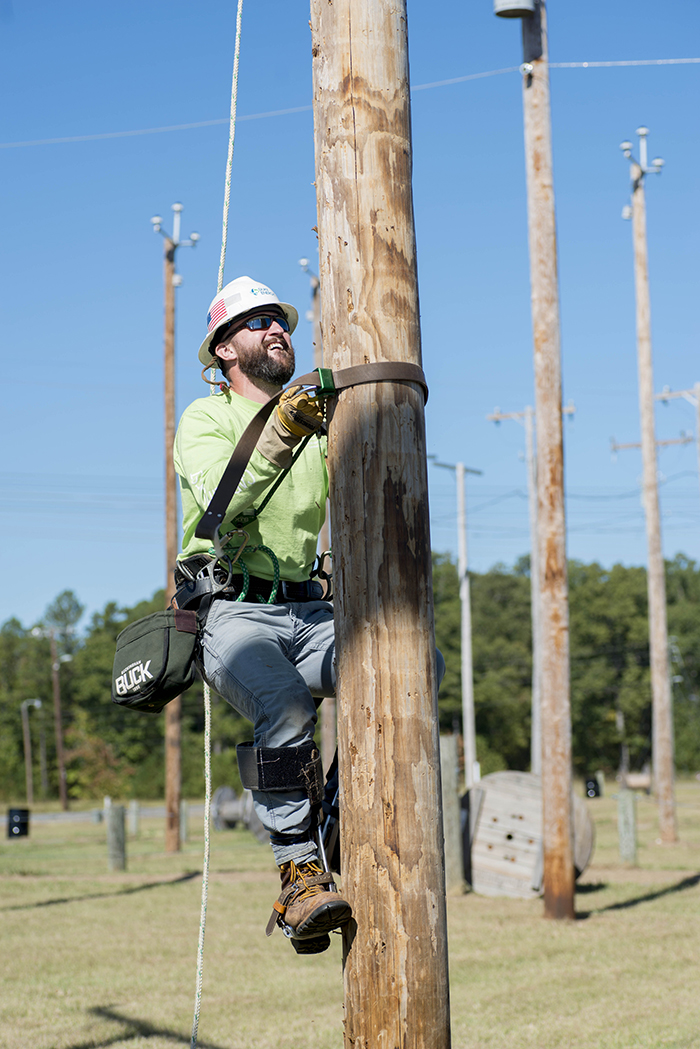 Gills stayed nearby, stopwatch in hand, shouting next steps and encouragement. At the top, Pound, wearing a bright green shirt, blue jeans and pounds of safety equipment, tied a pulley around the dummy, lowered it to safety and climbed back down – all in less than a minute.

Linemen aren’t normally racing a stopwatch, but Pound is practicing for the International Lineman’s Rodeo in Bonner Springs, Kan. He is one of 85 Duke Energy linemen who qualified for the competition, which will host 1,015 linemen from the United States, Canada and the United Kingdom from Oct. 12 to 14.

The rodeo tests job-related skills like the hurt-man rescue, equipment repair and pole climbs. Competitors are judged on speed, agility, technique and safety procedures. The winners will bring home a trophy and bragging rights.

But Hurricane Matthew had other plans.

From Oct. 7 to 10, 2016, Hurricane Matthew sped through Duke Energy’s service areas in Florida and the Carolinas, reaching wind speeds of 160 mph and leaving devastation in its path. More than 10,000 crews from as far as Canada worked for days to restore power to 1.5 million customers. The storm required such a massive response that the company canceled its participation in the 2016 International Lineman Rodeo. 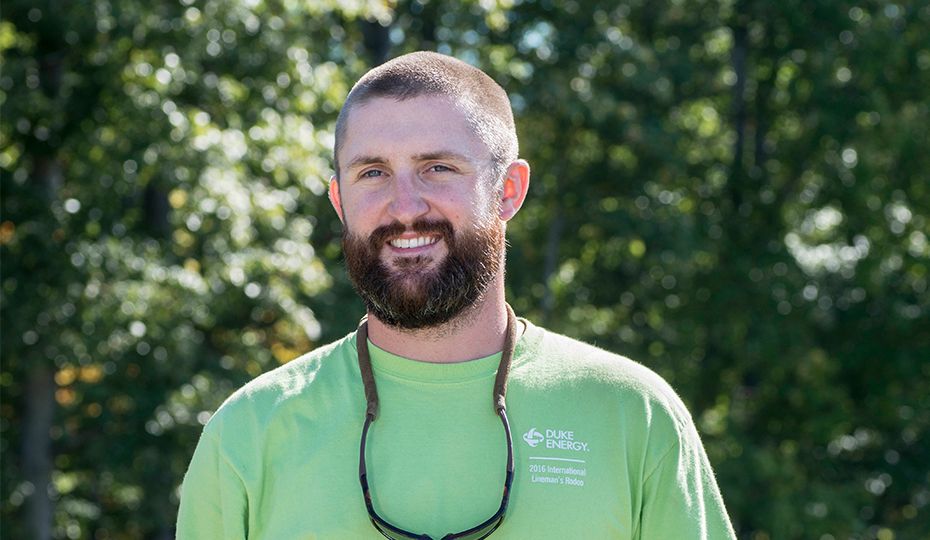 After months of practicing and qualifying for his first rodeo, Pound was traveling home from storm duty with his supervisor when they got news that Duke Energy would not compete in 2016.

“It was obviously a letdown, but at the same time, there’s no point in being bitter. The customer comes first,” Pound said. “We just had to look forward to next year.”

Now next year is finally here. Pound and the rest of the Duke Energy competitors spent time brushing up their skills at training sessions in North Carolina, the Midwest and Florida last week. In addition to practicing the two standard events – hurt-man rescue and speed climbing – the linemen practiced skills they think might present themselves in the two mystery events, which won’t be revealed until the day of the rodeo. 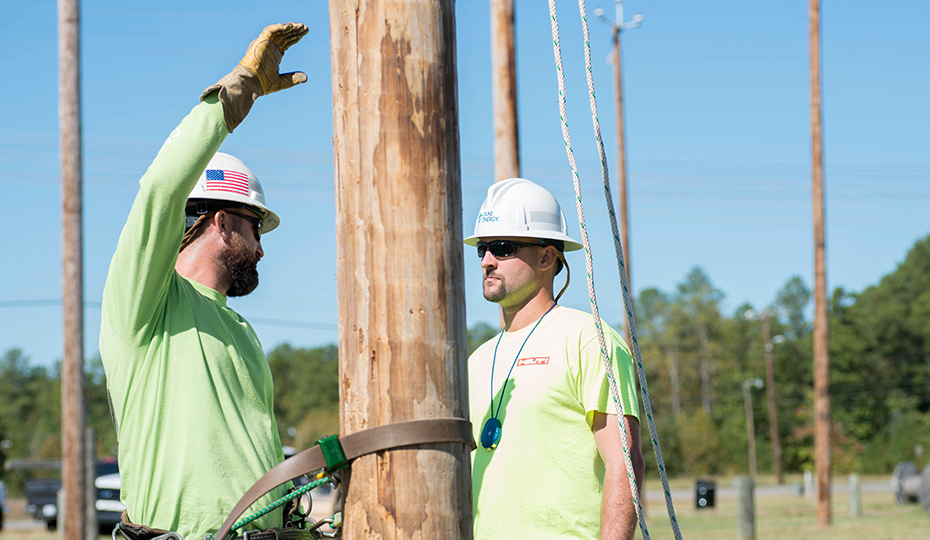 Pound, left, talks with his coach and co-worker Brandon Gills.

The apprentices, unlike journeymen and senior competitors, also practice a written test. The test makes up a large portion of the overall winner’s score, and Pound, who graduated from State University of New York Potsdam in 2011 with a degree in business, set a goal to study an hour each day, but sometimes life got in the way, and he had to settle for lunch break reviews and quick glances before his morning safety meetings.

At last week’s practice, the apprentices took about 10 practice tests, and Pound plans to review those again before the real test on Friday morning.

“The more you practice anything,” Pound said, “the better you get at it. By practicing all these different events, when you’re actually doing this work in the field, it makes it easier and helps me have more confidence.”

Pound, 28, played football, basketball and lacrosse in high school in Watertown, N.Y., and after finishing college, he realized he wanted a job that would give him a chance to work outdoors. A friend convinced him to attend the Southeast Lineman Training Center in Trenton, Ga. 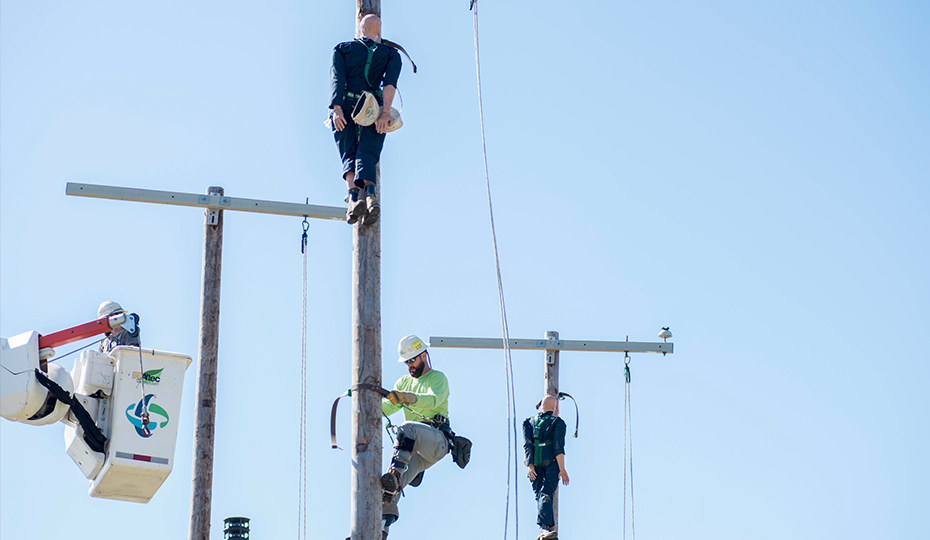 The hurt-man rescue is one of four events at the International Lineman's Rodeo.

“To me, there isn’t another job out there like it,” Pound said. “I like that it’s a physical challenge, and mentally, it keeps you on your toes also.”

He decided to stay in the Southeast when Duke Energy offered him a job in 2014, and he knew he wanted to compete in the rodeo. Pound said although he’s somewhat nervous, he’s excited to compete in Kansas. His grandparents, who drove 12 hours from New York to watch him compete in North Carolina, are flying to Kansas. His fiancée Brennan Hesse of Hickory will be there to cheer him on as well.

“I’ve always been a competitive person,” he said. “I don’t have time to play sports anymore, so this gives me the opportunity to still be able to compete just in a different way.”

At the rodeo, Pound learns lessons for next year

On Saturday, Pound woke up at 4:45 a.m., put on a blue Duke Energy shirt to match his teammates and headed toward the parking lot for the International Lineman’s Rodeo.

Pound and the other competitors unloaded the equipment trailers into the white tents at the National Agricultural Center Hall of Fame fields in Bonner Springs, Kan. After trudging through the rain and mud, Pound took a few minutes to stretch and strategize. 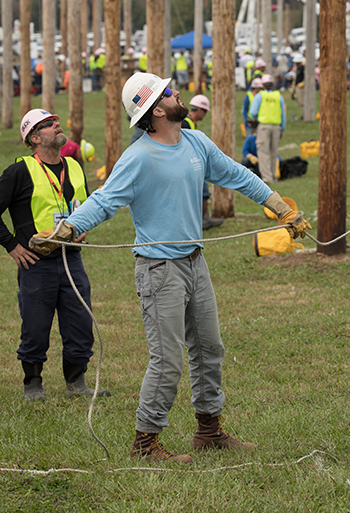 Pound throwing a rope during a mystery event at the International Lineman's Rodeo.

Pound wanted to place in the overall category. His plan was to get a high score on the written test on Friday then complete all four Saturday events as quickly as possible with no technical errors. Competitors are evaluated on safety and speed, so judges will deduct points for each error in technique.

“A lot of guys that are going for overall don’t go for good times,” he said. “They go for clean runs.”

Pound went through each of the exercises -- pole climb, hurt-man rescue and a mystery event -- in less than three hours without any technical errors. His coach and co-worker Brandon Gills carried his gear and Gatorade while his fiancée, Brennan Hesse, and grandparents, Bob and Jane Pound, followed him to each event.

At the final event, his supporters watched hopeful that he’d finish without any deductions. It would be the first time that Pound achieved that feat.

The last task: change out an insulator. But the first step – throwing a rope between two power lines at the top of the pole – requires expert aim. Competitors are allowed three throws before judges issue a deduction.

On his first throw, the rope hit the middle line and bounced off. Second throw: a little too high. Pound paused.

Pound’s third throw was just right. He sped up the pole to finish the job and climbed back down.

Pound, smiling, joined his group outside the roped off competitor’s area, fist bumped his grandfather and hugged his fiancée and grandmother. 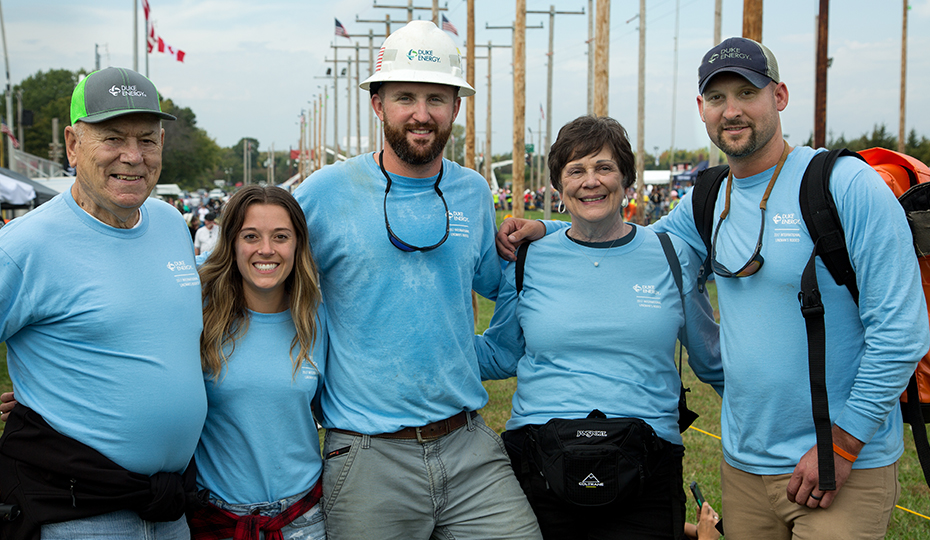 After Saturday’s events, Pound got his test score, and realized he wouldn’t win an overall award. This year’s test was unusually difficult, and his overall score took a hit. He finished 26 out of 313 apprentices. Normally, the overall winners score 100s and 98s, but this year only one competitor scored in the 90s – Duke Energy lineman Bryan Minikel, who took home the world champion apprentice title.

“I’ve never put a day together without having any deductions at all, so I’m happy with zero deductions,” Pound said, “but the competitive side of me keeps looking back at the test.”

Pound plans to compete again next year at his local rodeo and hopes to qualify again for international. Hesse and his grandparents who flew in from New York couldn’t be more proud.

Meet Mike Haynes. He helps keep the power on