Kenny Chesney’s “Summertime” blares over the speakers as Mike Haynes and other lineworkers strut to the music, their heavy work boots pounding the floor while they limber up for another day in the field.

A few kicks, some stretches, then they all touch their toes – or try to – as their voices join in the chorus: “Perfect song on the radio/Sing along ’cause it’s one we know. …”

“That’s why we do line work,” Haynes quipped after the music ends. “We can’t sing!”

The men, dressed in flame-retardant work shirts and jeans, share a proud fraternity.

“We’re a rare breed,” Haynes said. “You can meet a lineman anywhere in the world and you have a bond. You’ve got a specific skill set and not everyone can do that kind of work. Not only are you dealing with heights, you’re dealing with high voltage, you’re dealing with adverse weather and a lot of places that are hard to access. That can be a very, very unforgiving combination.”

Haynes works out of his hometown of Marion, N.C., at the foot of the Blue Ridge Mountains. You can also find him on 16 billboards promoting Duke Energy’s “a smarter energy future” and on a commercial now airing on TV in North Carolina. With 28 years of experience, and still fit at age 50, he is a walking advertisement for the linemen who work day and night to keep the lights on.

Veteran lineworker is a student

Haynes didn’t plan on that career. He was 21, working in a plant that manufactured automotive carpets and taking night courses in law enforcement when a co-worker mentioned an opening with Duke.

“Duke Power, as it was called then, had a great reputation out here in our county as a very stable place to work,” Haynes said. “And it was also good money. The more I worked, the more I loved it.”

And the better he got.

In 2005, Haynes began competing in rodeos, where lineworkers demonstrate their skills in technical events such as changing out power pole cross arms, replacing transformers and rescuing injured co-workers. Haynes and his team have earned seven trips to the International Lineman’s Rodeo in Kansas and finished third in the world in 2013 and 2015.

“It’s a great way to keep our skills honed,” he said. “And it gives families an opportunity to see what their loved ones do.”

Haynes now mentors younger guys on the job – and how to do it safely. 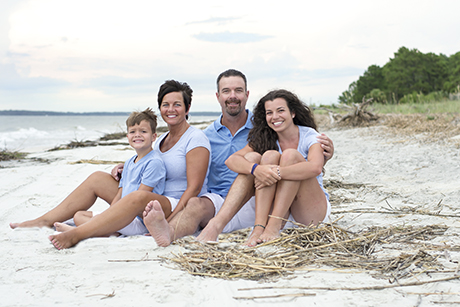 Veteran lineworker is a teacher

This morning’s assignment leads Haynes and two co-workers deep into the woods to a house under construction. They’ve got to erect two power poles and a transformer.

“Rocky Road!” Haynes exclaimed. “It’s going to be a long haul.” Rocks the size of cantaloupes pepper the hillside, and he predicts trouble drilling down 6 feet for the poles.

“Whatcha got planned?” he asks Avery Amerto, who’s been with Duke Energy for a year. Amerto is preparing the pre-job briefing. He gives each man an assignment, warns about snakes and poison oak and uneven terrain, reminds them to drink at least a cup of water every hour and makes sure they know the address and how to give directions in case of an emergency.

Then he swings out the boom on the truck and lowers the huge auger. Inch by slow inch, it bores into the ground, loudly crunching into rock.

Haynes knows something Amerto hasn’t yet realized: The extension on the boom is all the way out, providing less pressure for drilling. After a few minutes and too little progress, Amerto recognizes the problem. He stores the auger, backs the truck closer to the hole and begins again.

“A lot of times when you’re learning,” Haynes said, “if you’re allowed to make those mistakes that are in bounds and not a threat to safety, you learn from your mistakes.”

After an hour and a half of drilling and shoveling, the hole is finally deep enough to secure the 40-foot pole. Haynes glances at his phone. His mother-in-law has been trying to reach him. Ironically, the power is out at his house. Another lineworker will have to fix it. He still has a second pole and a transformer to help install. 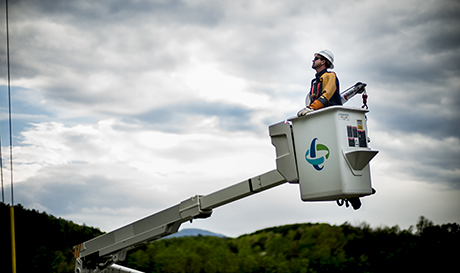 It’s tedious work, but Haynes is happy to be outside.

Why does he like the job so much? “I enjoy the customer interaction and being able to meet their expectations and leaving them happy.”

“I like my co-workers. Duke Energy hires good quality folks.” You can sense the camaraderie in their running repartee of jokes, with Haynes’s Hollywood smile punctuating each exchange. “One of the most crucial requirements of the lineman profession is you’ve got to have a thick skin,” he said in a deadpan. “Because if you mess up, it’s like a bleeding fish in a school of piranha.”

‘They provided a service’

On his days off, Haynes is often outdoors, too, hunting, fishing, kayaking. He and his wife, Lisa, own seven acres bordering Pisgah National Forest where they hike with their daughter, Carrmen, 21, son, Connor, 8, and their chocolate Lab, Barkley.

Connor is fascinated by what his dad does. “He’s always asking questions.”

Haynes said he remembers being fascinated when he was Connor’s age. He didn’t know the lineworkers, but Marion is a small enough town that he recognized their faces. They were the heroes who lumbered up in big trucks in the middle of the night along narrow country roads when it was 20 degrees and sleeting and the power went out.

“The linemen were looked up to,” Haynes said. “They provided a service that everybody needed.”

They welcomed him into their fraternity and Mike Haynes can’t think of anywhere else he’d rather be.

Behind the lines with Mike Haynes

7: Number of times he's competed in the International Lineman's Rodeo in Kansas.

Quoting: “You respect the lines. You know what the outcome could be if you don’t. We really focus on safety rules. We’re just constantly training and going over our Work Methods and procedures.”