Thousands gathered at Spa Beach Park to watch the show on July 31. Duke Energy, with its Florida headquarters in St. Petersburg, was the event’s title sponsor.

Duke Energy uses drones to work more efficiently and safely for tasks from inspecting power plants to helping restore power after a storm, but not for choreographed light shows. Ryan Sigmon, co-founder of Firefly Drone Shows, helped design the show at the St. Pete Pier and explained how his team does it. 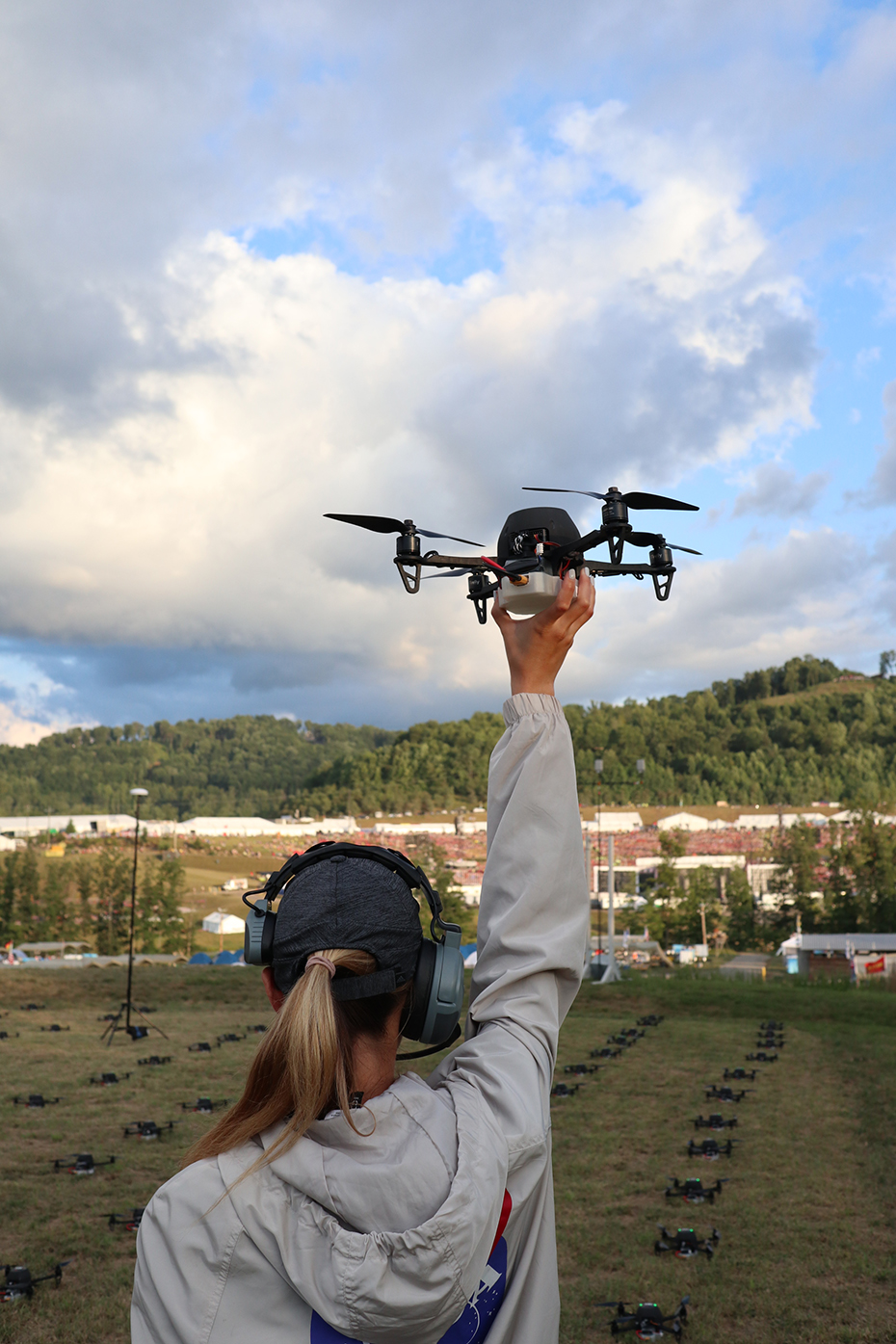 Their company started in 2017 with their first show of 60 drones at a music festival. They’re on track to do about 50 shows this year with up to 300 drones at each. The process of designing a show starts with meeting with the client to decide what they want to create.

“There's so many different pieces to the puzzle that have to come together,” Sigmon said.

An animator will create illustrations that show how the drones will morph throughout the show. For the Duke Energy Drone Show, they worked with Duke Energy, the pier and the City of St. Pete to choose items that represent the city including a pelican that seemed to swoop into the bay. 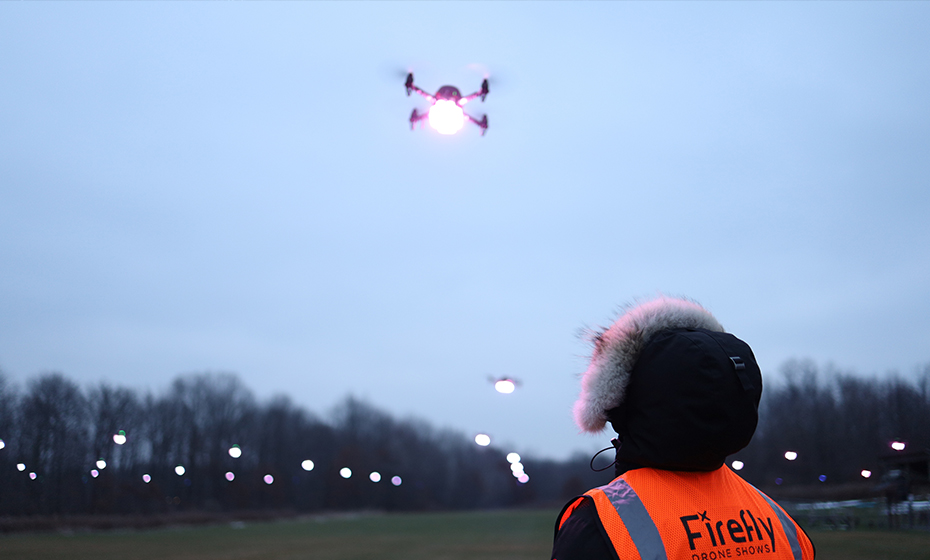 The animators use a proprietary software that programs the drones. Once the designs are set, the team will test the show in a field near their office in Michigan. Using their custom software that works like an advanced GPS system, they program each drone with its own flight path and color commands so they move together like synchronized swimmers.

“Each one,” Sigmon said, “is playing its role and getting into its position as the show goes on.” 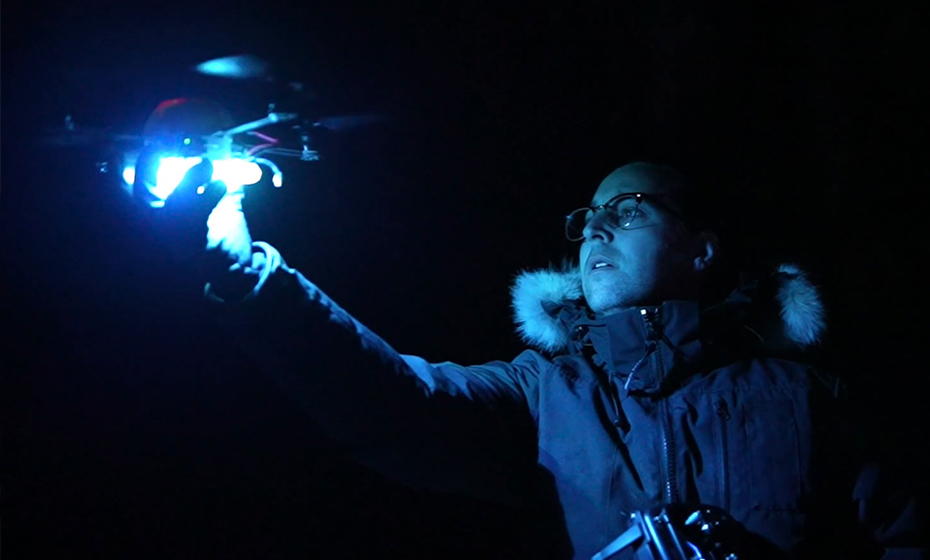 The formations are about 400 feet off the ground and, at their widest, about 700 feet across – that’s about the length of The Golden Gate Bridge. Though the drones seem close to each other during the show, per FAA regulations, they’re never closer than 12 feet to each other. Each drone moves up to 15 mph and has three LED lights attached to the bottom. The lights produce 3,400 lumens a piece – a standard halogen headlight emits about 700 lumens.

“It’s kind of hard to tell how big it is until you're standing there,” Sigmon said, “and it's towering over you in the sky.” 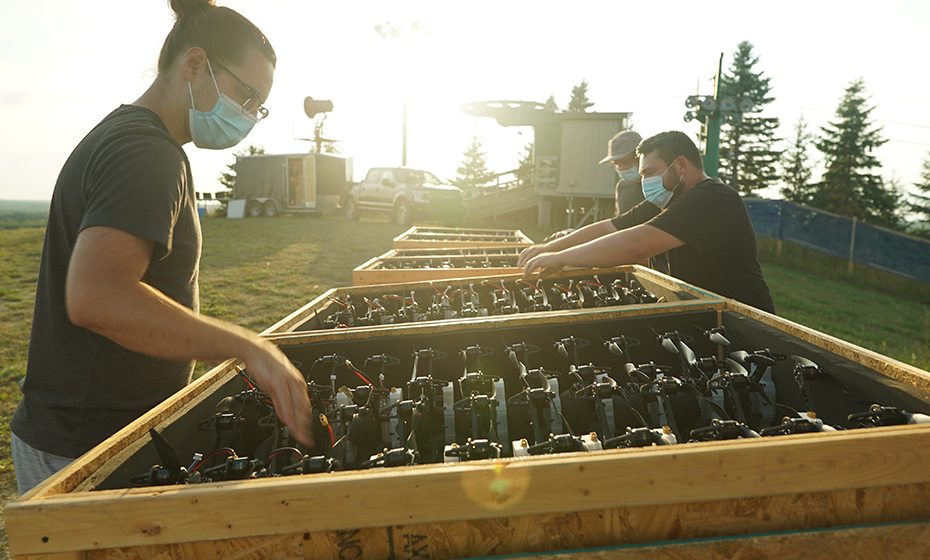 The drones are about 12 inches across, Sigmon said, and their team built them with custom parts or pieces purchased from other companies. Two days before the show, they pack their equipment and ship it to the show’s location.

The day of the show, they’ll unpack, program the drones and lay them out in rows of 10 for launch. About an hour before the show, the crew powers up the drones and does a pre-flight checklist. The team is certified to fly up to 300 drones per pilot. Because the drones are programmed with a flight path, the pilot uses a computer to monitor the battery life, altitude and vibration levels of the swarm.

Drone shows have only become popular in the last 5 years, so Sigmon said getting to see people experience the show is a lot of fun.

“We spend so much time in our warehouse nerding out on the drones,” he said, “and you kind of forget why you're spending so many months working on it until you bring it up for the audience. When everyone's cheering, you know, that's what really energizes all of us.” 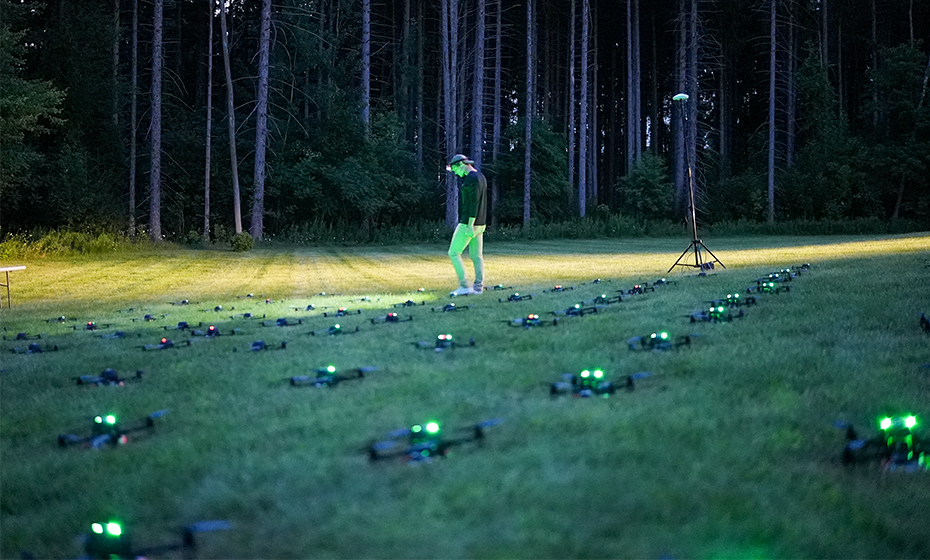