Consider this: The guy who gave us “Mona Lisa” and “The Last Supper” was a part-time painter. He spent most of his day dreaming up flying machines and other engineering marvels to please Renaissance bosses in Italy and France.

His peers considered Leonardo da Vinci the most dazzling polymath in history, and opinion hasn’t changed over five centuries. You’ll see why in “Da Vinci’s Machines,” a touring exhibit at Discovery Place Science in Charlotte through May 6, 2018.

Duke Energy presents this collection of 75-plus designs, models and reproductions of artworks. That’s logical: With imagination, you see how da Vinci’s concepts show up today.

“The robotics exhibits take my breath away,” said tour organizer Tom Rizzo. “To think da Vinci was working on drumming robots (or) clockwork drones is fantastic. His flying-machine designs are also outstanding; if some were built with cutting-edge materials, they would actually work!”

Rizzo is director of traveling exhibitions for Artisans of Florence, an Italian company created by the Niccolai family. They started developing and building working models from da Vinci's designs in the 1960s, using carpentry skills passed down through generations and wood, canvas and other elements found in his time. (All models built during da Vinci’s life are lost.)

“Few of his sketches are blueprints ready to be followed to make working machines,” Rizzo said. “Most are … experiments or concept designs, and many are incomplete; sometimes he did this intentionally, to protect intellectual property. So they take some interpretation.

“Luckily, our team works in da Vinci's own environment, surrounded by inspiration from real Renaissance technology. We work in close conjunction with the No. 1 da Vinci scholar in the world, Carlo Pedretti (professor emeritus of art and art history at UCLA).”

The exhibit begins with a faceless Mona Lisa, which entices you to stick your head through a hole for a selfie. Surprises lie just beyond.

You realize the greatest creator of the 16th century was potentially the greatest destroyer: A section on war machines reveals plans for boats with giant scythes, movable bridges for assaults, devastating super-catapults, impregnable attack posts and other killing devices. (Almost all went unbuilt.)

The genius we know shows up beyond this tribute to mayhem. Da Vinci was the original STEAMer – science, technology, engineering, art and math – and nothing in nature was too inconsequential to interest him. He envisioned anything from vast machines run on ball bearings to a night clock: Depending on humidity, temperature and the design of wick and wax, he could measure time by watching a candle burn. 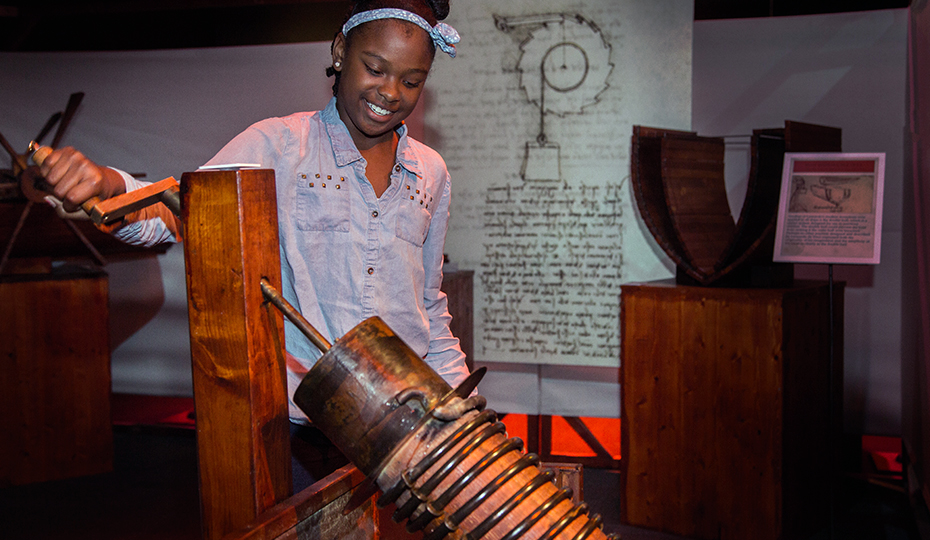 Modern engineers will smile at predecessors of their own tools. Da Vinci didn’t conceive the Archimedes Screw, which draws water upward to produce hydroelectric power, but he made it feasible. Today, Duke Energy’s Bad Creek Hydroelectric Station in Salem, S.C., can use this principle to supply 850,000 homes with energy from an underground plant.

Da Vinci worked with robots, often for theatrical stages, finding ways to apply body movements to mechanical devices. Such plans led gradually to robot arms used in places where human limbs would be unsanitary or endangered.

He designed a primitive helicopter and pioneered flying machines – some meant to be operated by humans, others not – in the first recorded attempt at a drone. Duke Energy uses drones to inspect solar installations, large boilers at power plants and other locales where human interaction is inefficient or dangerous.

The paintings at the heart of the exhibit aren’t machines, but Rizzo said they’re included for two reasons: Many visitors can’t see the originals in far-flung museums, and they show that “In Leonardo's mind, art and science were interconnected. He used his knowledge of science to mix pigments, his studies of optics and light to create realism and develop revolutionary techniques, and his knowledge of anatomy to paint lifelike features, such as Mona Lisa's smile.”

What will surprise visitors most, even longtime fans of da Vinci? Rizzo thinks it’s his universality. 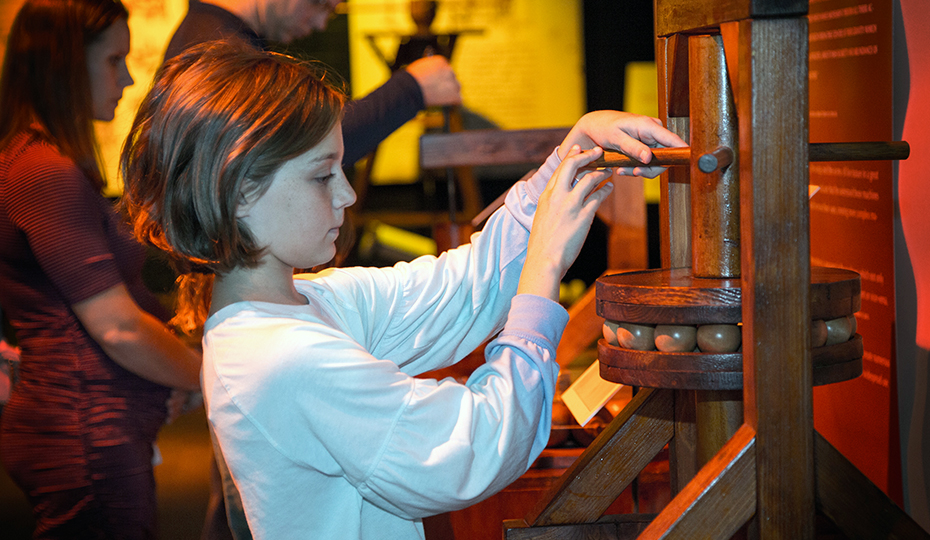 You can try out da Vinci's ball bearing model at the exhibit at Discovery Place Science in Charlotte, N.C.

“I hear a lot of people say Leonardo never finished anything: So many of his designs are incomplete, his paintings unfinished and his books unpublished. But I think this is an unfair assessment.

“Leonardo sketched 60,000 technical drawings, three-fourths of which are now sadly lost. He revisited many concepts numerous times to re-work old designs, so it really seems all of his works were works in progress: He was always looking for the next adaptation to improve them. He simply didn't have enough time to understand everything in the universe.”