After the loss of control power to a high-voltage circuit breaker, operators at the East Bend Generating Station in Kentucky turned to an innovative source for help.

Without control power, employees could not electrically open or close the breaker. Someone would have to hit the button by hand – a risky procedure because of the life-threatening potential for an arc flash.

Enter BRR, a robot designed to take over in dangerous situations. 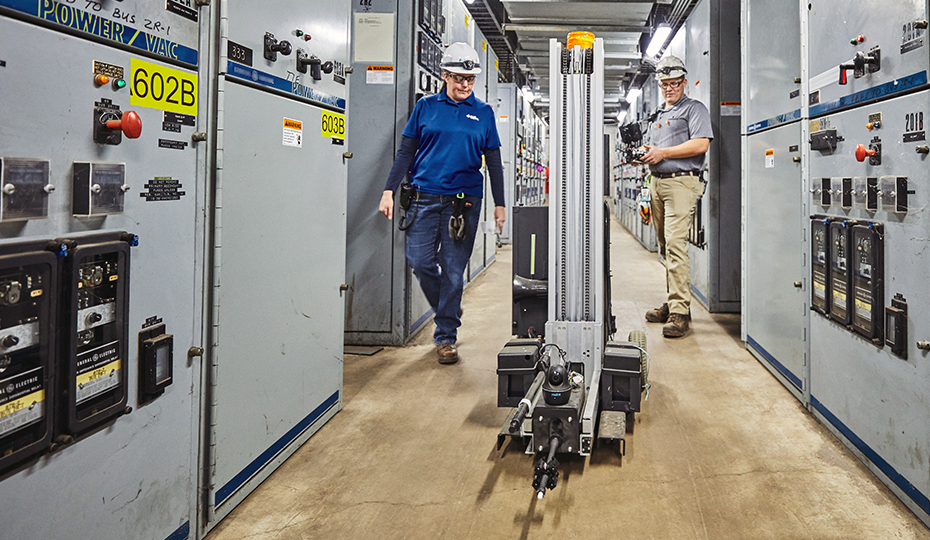 Sandie Hall and Charles Polly with the Breaker Racking ROVer at the East Bend Generating Station in Kentucky.

Duke Energy's remote-controlled Breaker Racking ROVer had been available for over a year but had never tackled a true emergency. Operators were eager to see how she performed.

“We had the potential of no protection on our breaker controls,” said Charles Polly, operations team supervisor. “So we immediately evacuated the area. And we put an all call out so that no one would enter the breaker rooms. Then (engineer) Sandie Hall said this would be the perfect time to use the robot.”

Polly volunteered to take the controls. All eyes followed the lumbering 6-foot, 6-inch machine as Polly steered her toward the circuit breaker. So far so good.

With the help of lasers, Polly lined up an extension pole attached to the robot with the reset button on the breaker. Now came the crucial moment. Polly slowly drove the rover forward. The pole made contact. The flow of electricity was cut off. 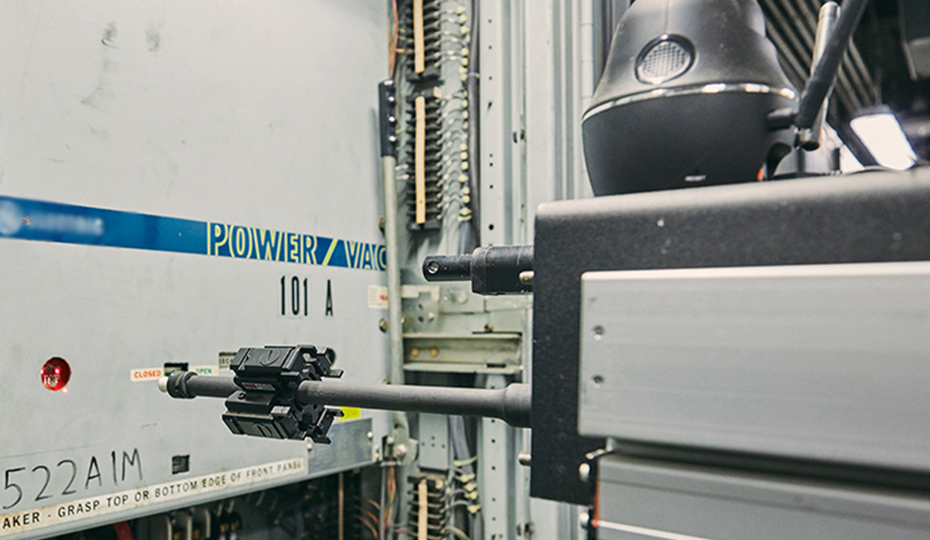 When the breaker was tripped, it let out a big bang. Polly and others watching let out sighs of relief.

“Utilizing that machine, we had no personnel in danger and we had less chance of damage to equipment,” Polly said. “The amount of damage that could have been done if something did malfunction could have been catastrophic. It was important to get that breaker open as soon as possible.”

Electricians were able to safely pinpoint the problem and fix it.

Though BRR gets credit for the mission, Hall gets credit for BRR. During a brainstorming session about using robots to make working conditions safer, Hall described the dangers of working on a circuit breaker when the trip coil fails, which – like a loss of power control – prevents operators from opening the breaker remotely.

Could a robot be designed to do the job? 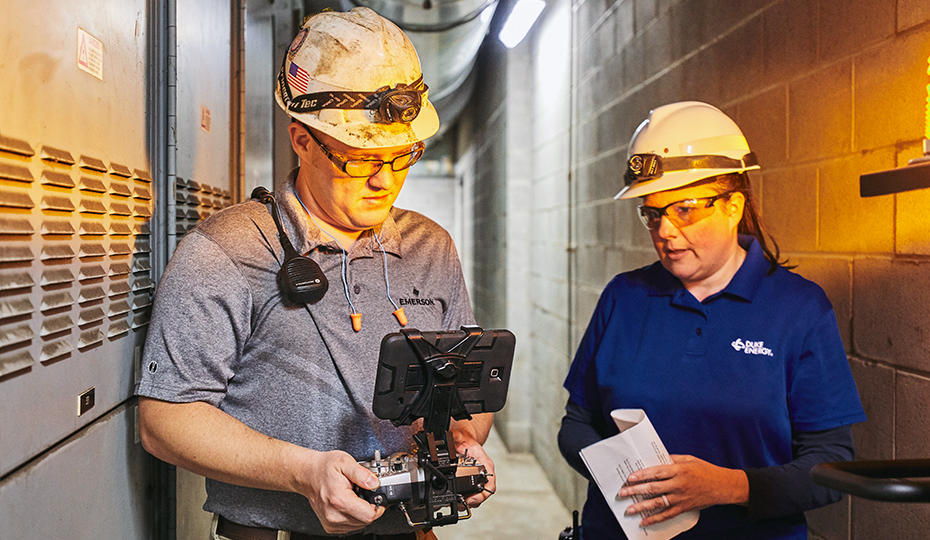 Charles Polly at the controls, with Sandie Hall.

Steve Hinkel, director of emerging technology Applications director at Duke Energy’s Erlanger, Ky., operations center, took on the challenge. Hinkel’s passion is inventing robots. He created two for Kentucky police departments to maneuver into places too dangerous or too small for officers to venture.

As he built BRR for the generating station, he consulted with Hall to make sure it was what she envisioned. Based on her suggestions, he tweaked the design until they had what they needed.

“This thing far exceeded my expectations,” Hinkel said. “No kidding, it increases safety, it actually saves us money, it increases accuracy and it performs super-human tasks: It has X-ray vision. It can work in smoke. It can work in zero-light. And its strength is phenomenal. It can apply more force than any human can.”

Hinkel and Doug Durst, who also worked on the prototype but has since retired, applied for a nonprovisional patent, and other utility companies have expressed interest.

Once BRR was up and running, operators at the East Bend Generating Station tested and retested the robot. There are 12 steps necessary to disconnect a breaker, work around a failed trip coil and reconnect the breaker. The robot can complete the first three – and most dangerous – steps: It can do a visual inspection, pull the knife switch to stop the flow of control power and push the trip button.

After the loss of control power in October, all that was required was to push the trip button.

“I was a little bit excited,” said Hall, who alternated between watching the robot’s progress on a monitor and observing it directly through a window in the door. “Until October, it never had been used in its full capacity where it needed to jump into action. Everything went very well. … It pushed the trip button while keeping the operators at a safe distance.” 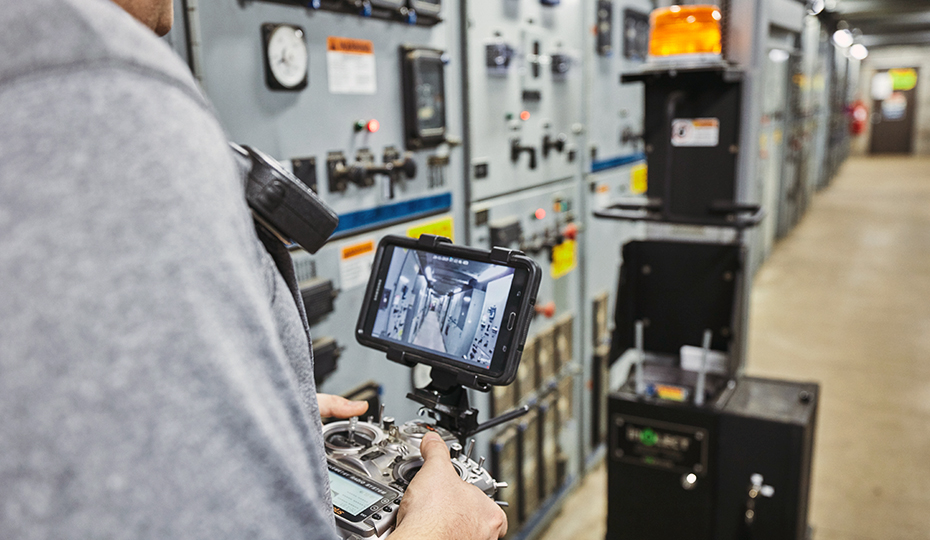 Robots can go in areas that may be hazardous for workers.

“It was 4:55 p.m. on a Friday and I went out and celebrated with a beer,” Hinkel said. “It’s definitely performing one of the riskiest tasks and it worked. It was a confirmation of Sandie’s original hypothesis. We brought it to reality. And sure enough it paid off.”

Every day across the United States, there are five to 10 arc flash incidents, according to the U.S. Bureau of Labor Statistics and CapSchell Inc. There have been an estimated 320 fatalities and more than 4,000 injuries every year over the past 10 years due to electrical injury.

In October, there was no arc flash at East Bend. But had there been one – and there was a high possibility there could have been one – BRR would have taken the hit.

“The robot is sacrificial,” Hinkel said. “If an arc flash does happen, the robot is going to get destroyed. However, I could create a new robot in less than a month. I can’t recreate my co-workers. That’s the purpose of the robot: To take a bullet.”

BRR stands ready for her next assignment.