Jody Blackwell stepped inside the front entrance of the old church. Long, wooden strips of floor trim are stretched across the tops of the pews, which are still arranged in a semicircle around the preacher’s platform, only three steps off the floor, same as it ever was.

Sheets of plywood cover gaps in the windows that for nearly a century were occupied by stained glass. It’s a Thursday morning, and it’s chilly in the church; the heat hasn’t been on in nearly a decade.

“What do you see when you look at it all?” a visitor asked him. 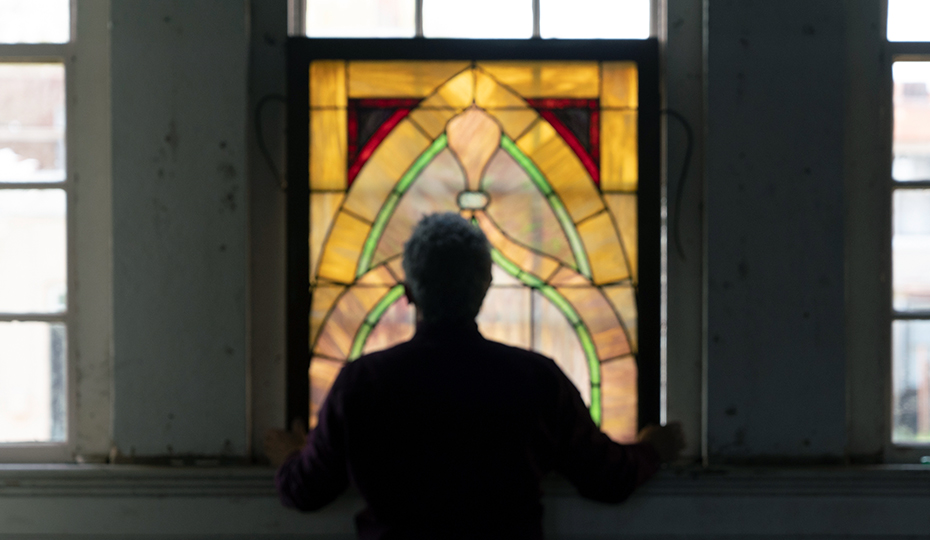 “It’s what I hear,” he said, gazing up at the ceiling.

String music plays softly from a Bluetooth speaker. Blackwell paused the music with a tap on his phone.

“This church was built in 1913,” he said. “What this building’s going to be is a music teaching center for at-risk children.”

For decades, the old building was Second Presbyterian Church. Eventually it closed, and pieces of it, including the windows, went to salvagers, while everything else got dusty.

Blackwell can envision the trim on the baseboards and the windows installed and the floor polished. He can see hallways leading to new bathrooms outside, and beyond that, a giant community garden. 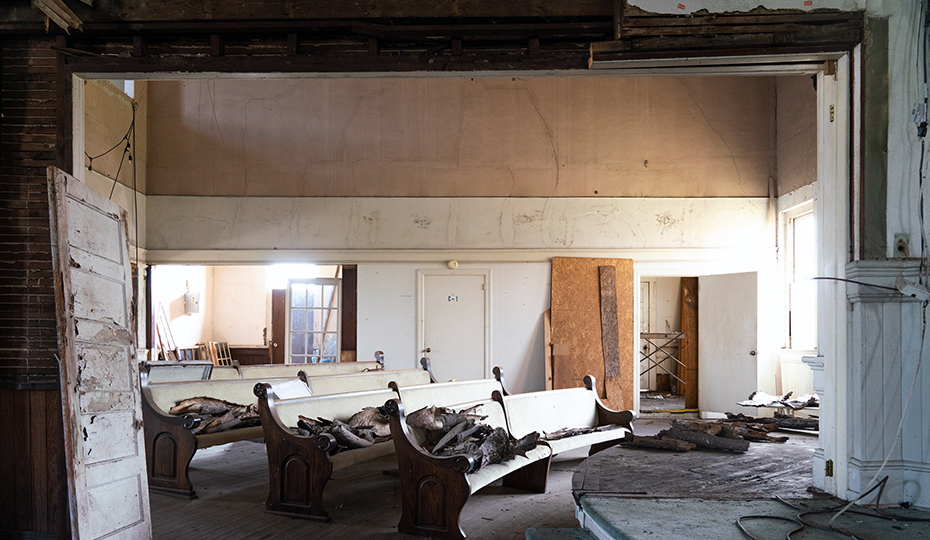 But again, as he stands in the doorway of what’s now named Beacon Hall, it’s not about what he sees. When he closes his eyes, he can hear the sound of children playing their first notes on a piano or pulling a bow across a violin for the first time. He’s 64 years old and says he was called to do this.

“You imagine that kid when he walks in there and just looks up – it’ll be nearly like walking through the train with Harry Potter going from one world to another,” he said. “When you walk in, you know where you’re at, how you should behave, and you know why you’re here.”

Blackwell grew up in Turtletown, Tenn., he said, “7 miles east of Ducktown.” Early in his career he worked at a copper mine just over the state line in Murphy, N.C. After the mine shut down in the late 1980s, he found a job with Duke Energy as a welder at Bad Creek Hydroelectric Station in South Carolina. He transferred to Salisbury in 1990.

He met his wife, Maggie, and they bought a home four blocks from Beacon Hall in the Fulton Heights neighborhood. Every time he’d ride his bike past the building, he felt drawn to it. They bought it in spring 2017, then formed a board of advisers and set up the nonprofit Beacon Hall Inc. An architect drew up plans to turn the church into a concert venue. But some things didn’t sit well with Blackwell: the pews would have to be removed for seats, walls would come down. He worried they’d strayed from the original purpose of the building. 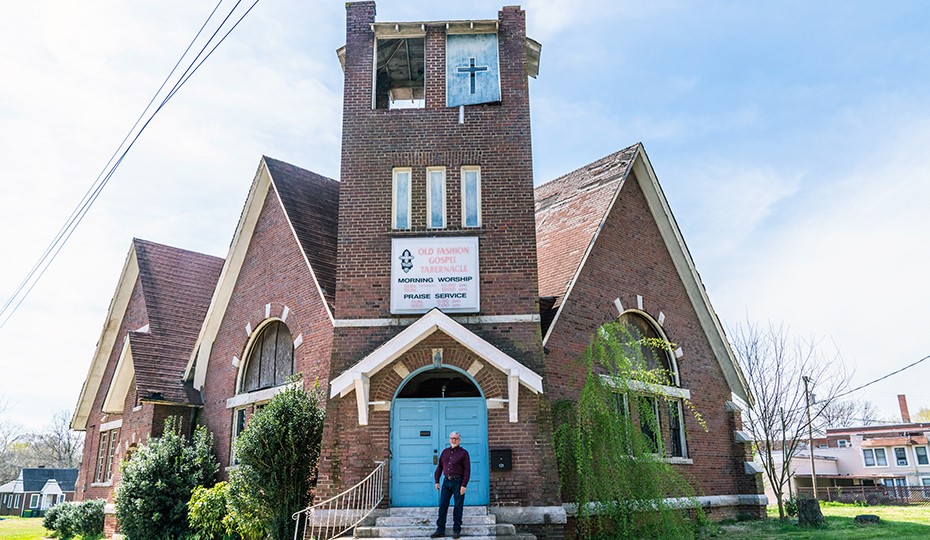 “What this building’s going to be is a music teaching center for at-risk children.”

“We’ve got to leave this old girl just like she is,” he says now. “If anything, we’ve got to preserve whatever’s there. We want to not disturb that as much as possible.”

They narrowed the mission and modified the plans.

In some ways, it’s as if Blackwell wants to recreate that moment he had six decades ago, when he first picked up a guitar. He still plays today, even after he lost his left pinky finger in a table-saw accident in 2005. He picked up the guitar again just a few weeks later and played the traditional hymn “Be Thou My Vision.” He played the violin for two years as physical therapy, and took formal lessons reading music. Now he's back to playing the guitar regularly.

“We’ve got to get music back into these little kids as they’re coming up and allow the music to be part of their education,” Blackwell said. “I know what music gave me whenever nothing else did.”

Bob Harris considers Blackwell one of his closest friends. They’ve gone to First Presbyterian Church together for more than 20 years. Harris remembers when Blackwell told him about his idea for Beacon Hall; Harris made the first donation.

“I have a tremendous amount of faith in him,” Harris said. “Jody is creating an atmosphere where folks can see things and achieve things that nobody else thought they could do. And once a person believes they can do something, then it’s half done.”

Not long after he bought the church, people from the neighborhood dropped by. One was Ashley Honbarrier, who co-manages a greenhouse at an alternative school for underprivileged youths, where they practice horticulture therapy and grow plants for other school and community gardens. She also works as a concert producer and promoter, so she was eager to hear Blackwell’s plans. A few months later, Blackwell bought the vacant L-shaped piece of property that surrounds the church, and now he wants to add a greenhouse and community garden to the land.

“What I love about Jody is his faith,” Honbarrier said. “He sees that everything is leading to this much bigger thing. It’s leading up to his goal and mission I guess. And as the little things present themselves, it’s like the universe working.” 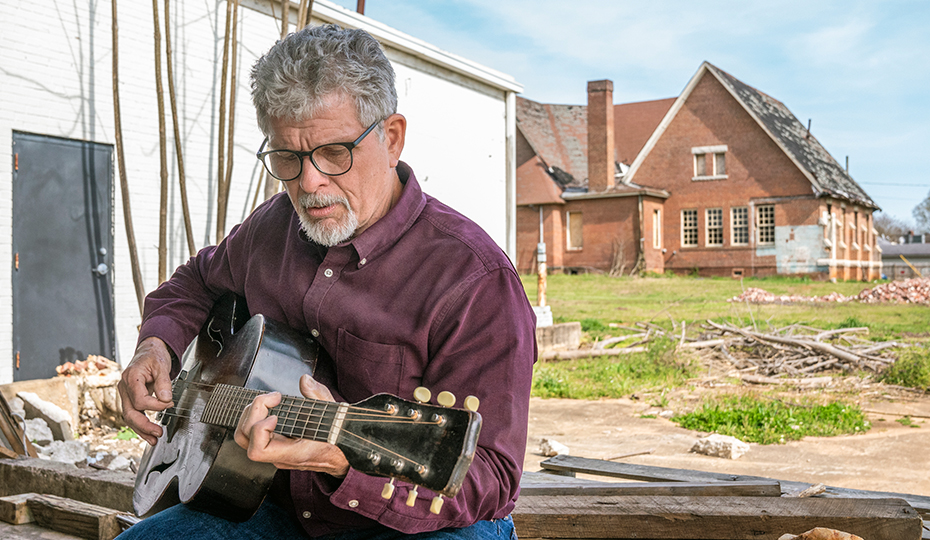 “We’ve got to get music back into these little kids."

A pile of bricks sits on the open land now; they’re from the old Buck Steam Station, which Duke Energy demolished in 2018. Blackwell plans to use them to add bathrooms to the old church. Nearby on the property is a section of an old warehouse built nearly a century ago as part of the floral business of J. Van Hanford, father of former U.S. Sen. Elizabeth Dole.

Blackwell doesn’t seem concerned about whether it’ll all come together. In fact, he’s certain it will.

On that recent Thursday morning, he stood in the street with his visitor, looking back at Beacon Hall. He said he and a friend from Duke Energy, Tim Ford, hung 14 replacement windows a few months ago. The nonprofit is now applying for grants for the roof.

As Blackwell talks about the building, a woman walked by.

“Are you guys the ones who bought this?” she asked.

“I am,” Blackwell said. She lives in the neighborhood, she said, and every time she walks by with her friends they wonder what’ll happen with the church.

“This is going to be a music teaching center,” he said.

“Well if you need a flute teacher, let me know,” she said. “I’ve been playing for 22 years, since the fourth grade.”

Blackwell turned to his visitor and shrugged.