A few years ago, Michael Bowen’s brother gave him a small 3-D printer for Christmas.

Bowen put the printer together himself. An inventor at heart who always has a project, he used it to convert drawings into better curtain rod holders, a wall-mounted dog food dispenser and plastic car parts. 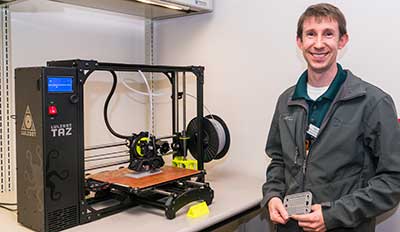 Michael Bowen and a 3D printer at Oconee nuclear plant.

As he experimented, he realized how helpful it would be to bring the technology to his job as an instructor at the Oconee Nuclear Station, where he teaches Duke Energy employees about the systems they’ll work on.

Today, Bowen uses a much bigger 3-D printer to bring the field into his classes. Instead of just seeing pictures of breakers and valves, students can touch and study plastic models of the metal components they’ll encounter.

“A lot of our operators are hands-on learners. It’s much easier for them this way. You can just hand it to them and then they get it,” Bowen said. “Some of the concepts aren’t terribly complex, but a picture doesn’t describe it, and you get blank looks. Having something in your hands keeps the class energized and helps with concepts where there’s been some confusion.”

The training at Oconee is part of Duke Energy’s growing commitment to 3-D technology in its workforce and communities. With 3-D technology transforming industries from fashion and design to airplanes and automobile manufacturing, the company has partnered with colleges in its service area to expand their programs. 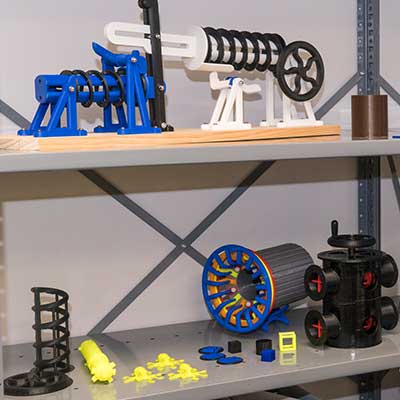 Examples of these investments include a Duke Energy grant of $400,000 for an entrepreneur and innovation center at the University of North Carolina at Asheville, $250,000 to mechanical engineering programs at Richmond Community College in North Carolina and $300,000 to East Carolina University in Greenville, N.C. Each grant includes funding for 3-D printing equipment and software.

The Oconee station started using the 3-D printers in April 2016. So far, about 100 employees in Operations, Maintenance, Chemistry and Radiation Protection programs have used 3-D models as training tools.

One employee is Jessi Link, an engineer who transferred to the Operations Department at Oconee and is in the rigorous license class training. She said the 3-D model components have been a huge help in learning the station’s systems.

“It’s all very technical, and a lot of people become bogged down, but having that visual asset really helps out,” she said. “They show us what’s going on inside all these components, and help create a better understanding.”

The four 3-D printers at Oconee cost about $2,500 each. The Oconee team sees great potential to incorporate them into many facets of the energy industry. Other Duke service areas have taken note, and recently the Tennessee Valley Authority’s Sequoyah Nuclear Generating Station purchased 3-D equipment with guidance from Oconee’s staff.

“When Michael first brought the idea to me, I could not visualize what this was,” said Christopher Rop, operations training manager at Oconee. “Now it makes perfect sense – the cost makes sense and the benefits make absolute sense.” 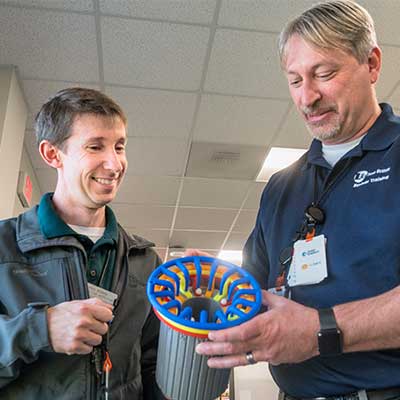 Michael Bowen, left, tells Christopher Rop how water flows for cooling into this model of a generator.

The Oconee staff hopes to build 3-D models as prototypes for station equipment that needs to be replaced or repaired. Instead of taking days or weeks to outsource the job, the printer could turn a drawing into a component replica in just hours, which they said would save time and money.

If you’re not familiar with a 3-D printer, here’s how it works. Bowen designs a model on paper, and then, using a program called 3D Cad, renders each piece into a 3-D computer space. He exports the individual pieces to a computer program made for 3-D printing. He sets the parameters (such as hollow, with thick walls) and loads the printer with spools of thin plastic filament. When the machine heats up, it starts printing the object, layer by layer, until it’s finished – usually within a few hours.

At home, Bowen now has a bigger 3-D printer than the one his brother Dan initially gave him in 2015. He has used his personal printer to make gadgets and gifts for his family and friends. He’s created personalized keychains, flower pots, funnels and a lamp stand.

Bowen also has his pilot’s license and designed drink coasters imprinted with a drawing of his small airplane. He has found many practical applications such as replacing a blade guard on a bandsaw and replicating missing or broken parts for the old radios he restores.

“Some of those old plastic parts are really hard to come by,” he said. “It still blows my mind how many things you can do with this technology.”