When your power goes out, the energy company wants to restore it as soon as possible, and that’s where Theorem Geo comes in.

The Charlotte, N.C., company is developing Google Earth-like GIS technology to help Duke Energy planners set up staging areas during storms. When Hurricane Matthew knocked out power to millions in Florida and the Carolinas in October, the pilot program saved about six hours of prep time. 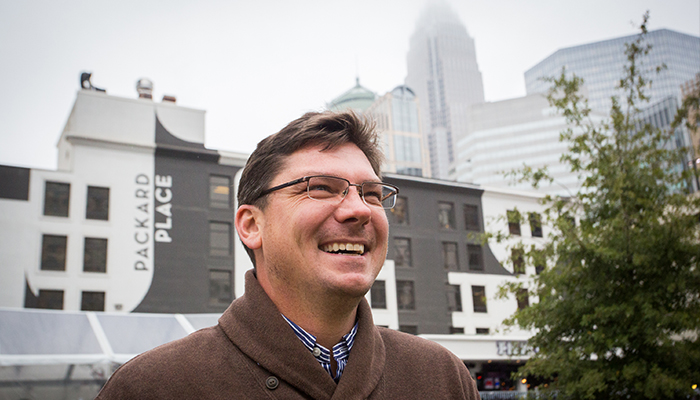 That new process is why business accelerator CLT Joules picked Theorem Geo and seven other companies to participate in the three-month energy industry business accelerator program. Duke Energy and Southern Company, headquartered in Charlotte and Atlanta, respectively, are flagship sponsors of the program with hopes that it will spark innovation and establish the Southeast as an energy hub.

Since 2013, the nonprofit CLT Joules has helped more than 17 companies refine their business ideas and network with others in the industry.

Theorem Geo founder and CEO John Eddins, whose expertise is coding, said he’s still learning how to manage his growing business. In 10 years, Theorem Geo has grown from one employee to 19.

“I’m trying to learn how the new shoes fit, and right now, they’re kind of like the little ballerina binding shoes,” he said. “I’ve gotten plenty of blisters.”

The companies benefit from one-on-one mentoring, access to seasoned practitioners and workshops including marketing, law, strategy and pitch refinement. At the end of the program in February, participants will pitch their new ideas to the Joules network and investors in Atlanta and Charlotte.

“The most beneficial thing they are offering us right now is a sounding board to other utilities,” Eddins said. “We’re always going to be in the services side, but we’re trying to get into the products side, too, and that’s a different animal, but that’s how we’re going to grow and be successful.”

The mapping project is just one of several Duke Energy projects Eddins’ team has worked on. He estimates he’s worked with about 15 groups at Duke Energy since starting his company in 2006. 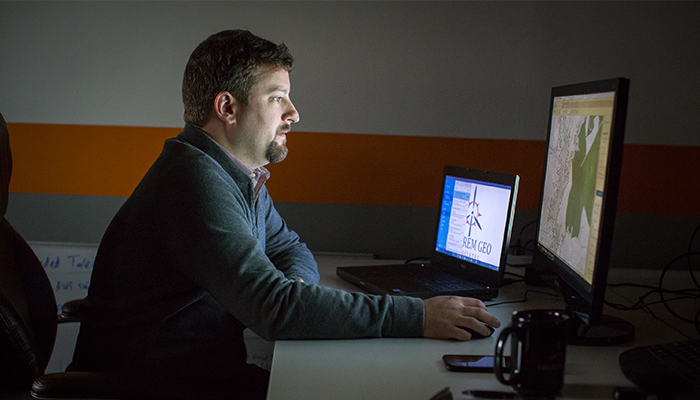 Cody Yeager works on one of several mapping prjects.

During Hurricane Matthew, Duke Energy brought in more than 10,000 lineworkers from 24 states and Canada to help restore power in the Carolinas, and organizing a team of that size is complicated. It required constructing tent cities at staging areas across the states to house and feed hundreds of lineworkers. A small staging site may need to park 200 trucks, while the average holds 400 to 500.

Theorem Geo uses the staging area’s size and terrain to determine the most efficient parking pattern so that all of the trucks fit and aren’t blocked in when it’s time to leave.

“It’s kind of cool,” Eddins said. “What we’re doing allows Duke to say here’s how many people we can put here, and these are the resources we need.”

The finished product will determine parking capacity, tent placement and portable toilet needs. The technology also allows organizers to send traveling lineworkers specific coordinates for where they should park their trucks rather than sending a vague location. 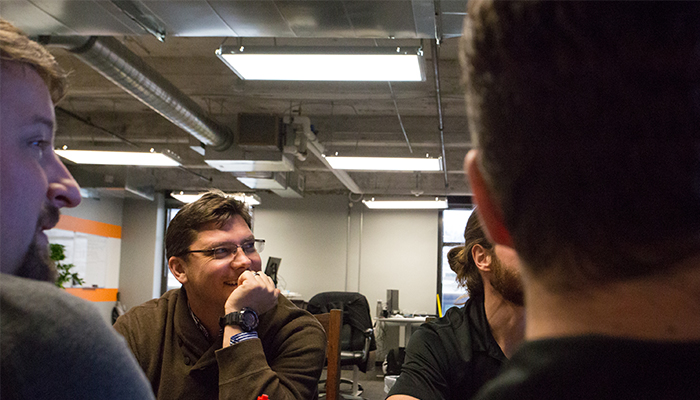 The team discusses drone footage at the Theorem Geo office.

Doug Esamann, Duke Energy executive vice president of energy solutions, is a CLT Joules mentor. At the program’s kickoff dinner, he spoke about the value of innovation to companies like Duke Energy. As customers expect instant access to information and services, he said leaders must help shape and accelerate innovation.

“We understand how important innovation is,” Esamann said. “We’re proud that we serve customers well, but we are challenged by folks who could provide better value. We want to provide our services in a customer-focused way.”

And Eddins said he’s thankful for that outlook.