More than 220 Duke Energy workers have been working to restore power in Puerto Rico since January, and they have found a new way to string lines and navigate the challenging mountain terrain: drones. 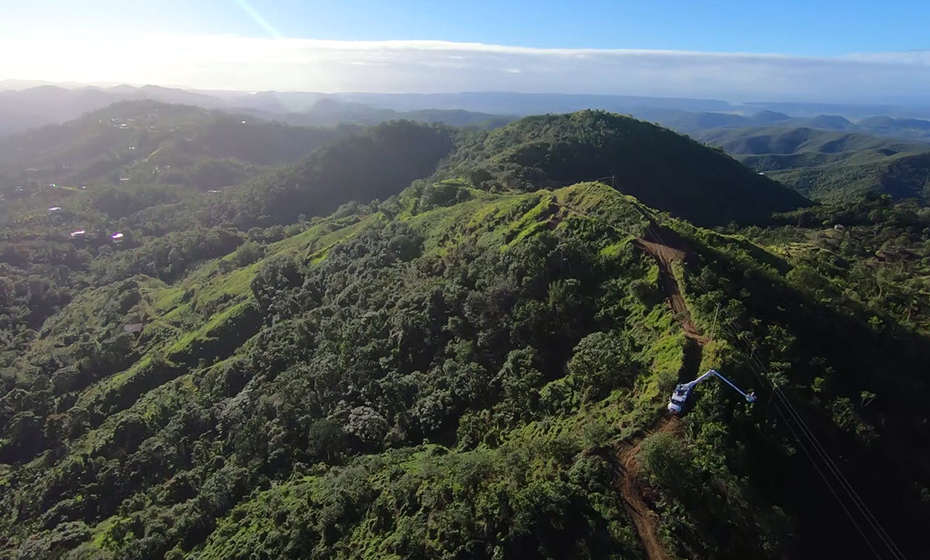 Workers are scouring the island for broken poles and downed power lines that, in some places, are buried under five months’ worth of overgrown vegetation after Hurricane Maria left the electrical system in pieces in October.

To help the crews find the buried infrastructure, Rufus Jackson, Duke Energy vice president of distribution, construction and maintenance, summoned the company’s drone team. He knew they would be able to fly drones above mountains and deep ravines to look for damage and uncover safe paths for crews to access structures, but he didn’t know they would be able to help restore power, too. 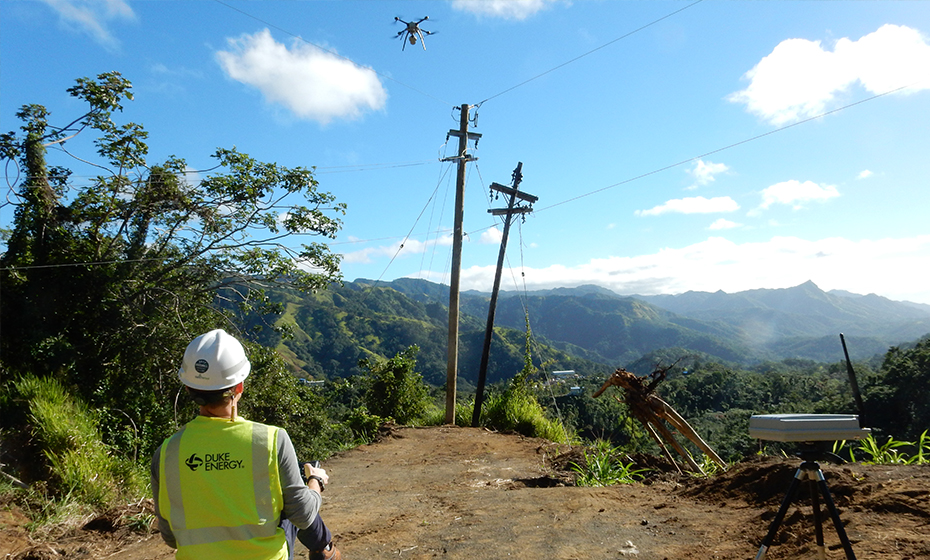 “It made our jobs easier, more efficient and a lot safer because now we don’t have to put humans in the ravines and gorges to try to find the old wire,” Jackson said. “Basically we have the new pre-line hung up, and now we have something to connect to and finish the restoration.”

Duke Energy has been using drones since 2015 and is among many utilities that inspect solar panels, wind turbines, transmission lines and other structures with infrared and high-zoom sensors, but Jacob Velky and Bryan Williams, the Duke Energy Unmanned Aircraft System team, are some of the first operators in the United States to use a drone to restring power lines.

They had the idea last year when working on a transmission project in Indiana, where the only option for stringing the line was by helicopter – a hazardous but widely used method by trained experts in the utility industry.

During this construction process, a helicopter attaches what acts as a big needle to the end of a cable, flies up to the transmission tower, and hooks the cable on to one side. The helicopter disconnects from the cable, goes to the other side -- all within 50 feet of the tower – and reconnects to the needle to pull it through the tower. 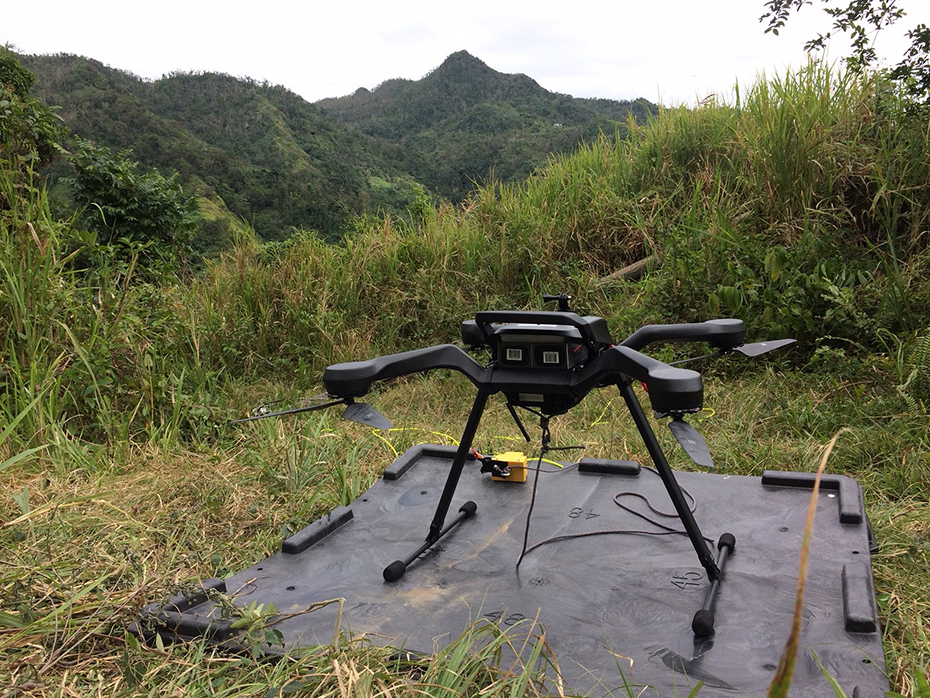 The drone the team used in Puerto Rico, which can carry up to 10 lbs.

“A hazardous job is when the helicopter is clipping the line into the outside phases,” Velky said, “and it’s extremely hazardous when you’re stringing the center phase, which is right through the center of the tower.”

Dhiaa Jamil, Duke Energy executive vice president and chief operating officer, asked the team if it was possible to use a drone to pull a lighter weight string through the center of the tower to eliminate the helicopter task.

Velky said they hadn’t thought of that and a quick Google search didn’t show results of other utilities using the method either. He, Williams and their third teammate, Isaac Medford, went to work to figure out a way to make it happen.

After determining the distance between the two poles, they would use a 2 1/2 foot by 2 1/2 foot drone to carry a lightweight, nylon parachute cord. Medford then designed and 3D printed an electromagnet that allows them to drop the cord with precision. The magnet also provides a level of safety, so if the rope becomes tangled or the drone gets in a situation where they need to abort, they can drop that rope and bring the drone back safely.

They tested the process in Indiana and in a swampy area of North Carolina before going to Puerto Rico, where they strung 9,000 feet of cord. The longest strand was 1,200 feet – a little longer than three football fields.

In Puerto Rico, the alternate option for stringing the line over long distances, thick vegetation or deep ravines, is shooting a brass projectile attached to a lightweight nylon cord from a shotgun. The method has worked well for years, but it has limitations in accuracy and distance. The maximum range for the gun is about 800 feet, and many of the power poles in Puerto Rico are farther apart than that. 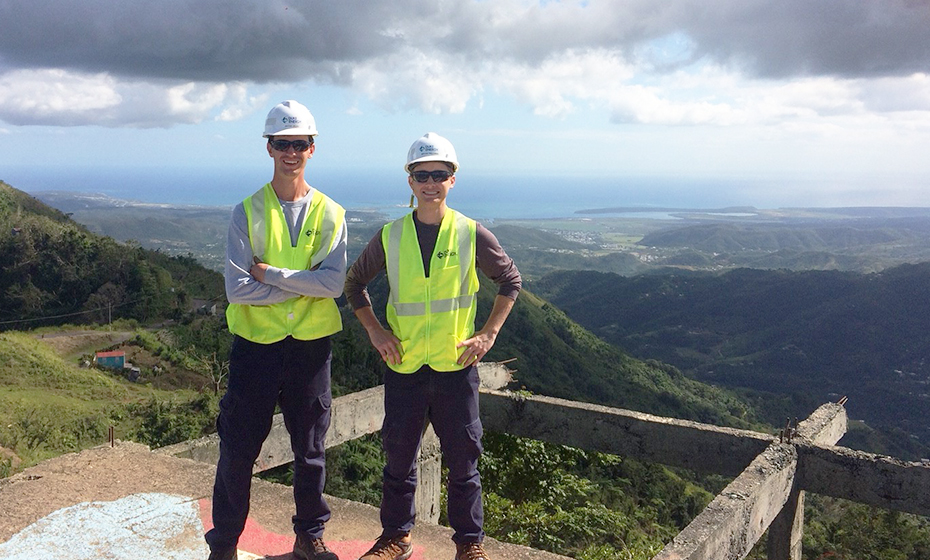 If the shooter misses, he or she has to walk through the brush to find the projectile and try again.

As the team strung the first drone line in Puerto Rico, they were standing outside of a house that didn’t have power. Velky said it was a rewarding feeling when those people came outside to watch because he could see the faces of those they were helping.

“It was an awesome and impactful experience to get in the field and feel like you’re helping the customers,” Velky said. “This project is starting in the aviation services group, but on the horizon, we can see some groups in transmission and distribution using this. I think this will continue to evolve.”