Tom Fenimore is a tinkerer. And a handyman. And a teacher. Fenimore is also a student, and he’s learning how to make one of his big projects an even bigger success. 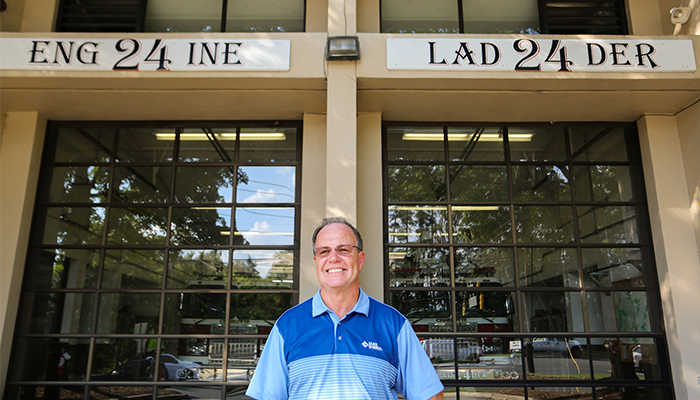 The project is a back-up power system at Duke Energy’s McAlpine substation for Fire Station 24 in Charlotte, N.C. After months of operating in simulated conditions, his project got its first real-world test when an April storm cut power. His microgrid (made up of solar panels and batteries) kept the lights on for the 1 minute and 15 seconds that power was out.

Although brief, the switch proved the system would work as planned.

The April storm was the first time the microgrid automatically switched from the main electric grid to the battery to provide power. During the storm, Fenimore received a text message that the automatic switch was a success.

“I kept waiting for a phone call saying there was a problem,” Fenimore said, “but I didn’t get one, and that meant everything operated the way it was supposed to.”

Another storm, in September, tested the microgrid and it succeeded again.

For his creation, Fenimore, technology development manager in Duke Energy’s Emerging Technology group, earned the company’s highest honor, the James B. Duke Award. Fenimore has been with Duke Energy for 26 years and spent about 2 1/2 years with help from Duke Energy teammates designing, building and testing the microgrid. 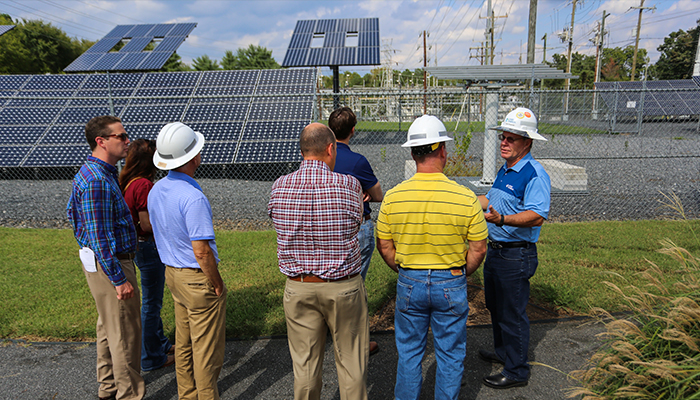 Fenimore explains the system to a group of engineers from SCE&G outside the McAlpine Solar Array, Duke Energy's first solar project.

What’s it do? Detects disturbances to the flow of power (like heavy winds or a branch on the line) and automatically switches the fire station to a self-sufficient, renewable energy source­—the battery. ­­

He assembled the electrical system and created the code that makes the system run so seamlessly that the fire station won’t notice when the switch occurs.

Charlotte Fire Department Battalion Chief Damian Owens said the station is glad to have it.

“We rely on an uninterrupted power supply to carry out our mission,” Owens said. “We must have power to open and close the bay doors, operate our station alerting system, heat and cool the station, and run fuel pumps for refueling the trucks.”

Usually, microgrids are costly, custom made, and some pieces, the solar panels or battery, are owned by the customer. 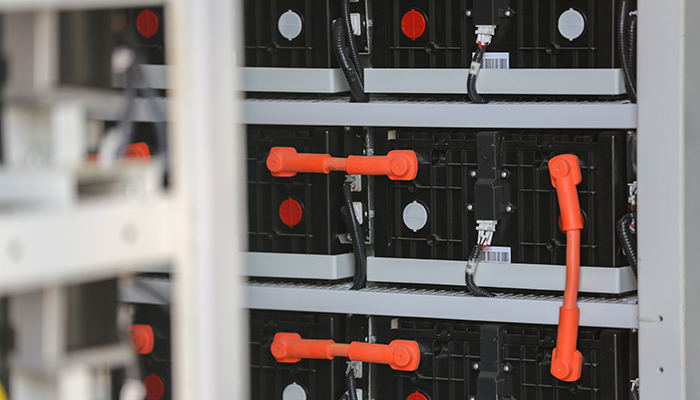 A few of the nearly 1700 smaller batteries that make up the massive 200 KW battery that can support the fire station for an expected 36 hours.

It could be years before Duke Energy is ready to offer the technology, but knowing this project is possible is a big step.

“It’s great to build this stuff for research and development, and it really is a good feeling to actually know it’s providing a valuable service for a customer,” Fenimore said. “The proof that we can do this and it can operate automatically is absolutely huge in building confidence as we go forward in building these types of systems.”

It was the perfect project.

“It’s kind of in my nature. I’m a tinkerer and a builder, and I’m not the kind of guy who calls the contractor to fix the plumbing or the electrical,” he said. “I take that on myself. Always have. I enjoy it. It truly is the best part of my job.”

And a project like this needed a hands-on leader. Because Fenimore wrote the code that is basically the brains of the system and lives 2 miles from the microgrid, he’s always on call. His contact information is taped inside a control box on a utility pole if somebody needs help.

“I drive by here at least twice a day,” Fenimore said. “This is the type of project you’re going to have to own for a while.”

When he’s not building, he’s teaching others how to build. Fenimore leads a tour of the project at least once a week for engineers from other energy companies and other Duke Energy employees. 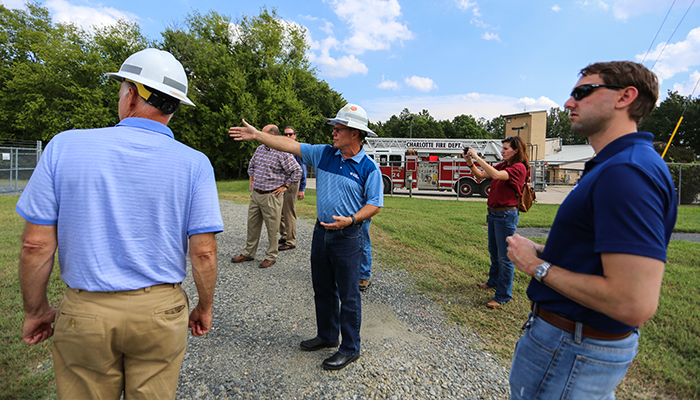 Fenimore and SCE&G employees outside the McAlpine microgrid station.

He also gives Central Piedmont Community College power systems engineering students tours for a glimpse at the industry and what jobs are possible after they graduate.

Fenimore, who graduated from Drexel University, said he believes we will need even more capablepower systems engineers in the future because microgrids aren’t just for back-up power supply. They can help make better use of renewable energy.

In the afternoon when most people are at work, the sun is shining and there’s more solar energy than necessary, but it currently can’t be stored. Microgrids could create a place to store the energy to use in the evening when the sun isn’t shining, and people are home running air conditioning, televisions and stoves.

“That’s the beauty of it,” Fenimore said, “it’s multifaceted.”