Mike Haynes, David Phillips and Neal Walker have been to the International Lineman’s Rodeo more times than most, but on Oct. 19, they walked across the stage as world champions for the first time. 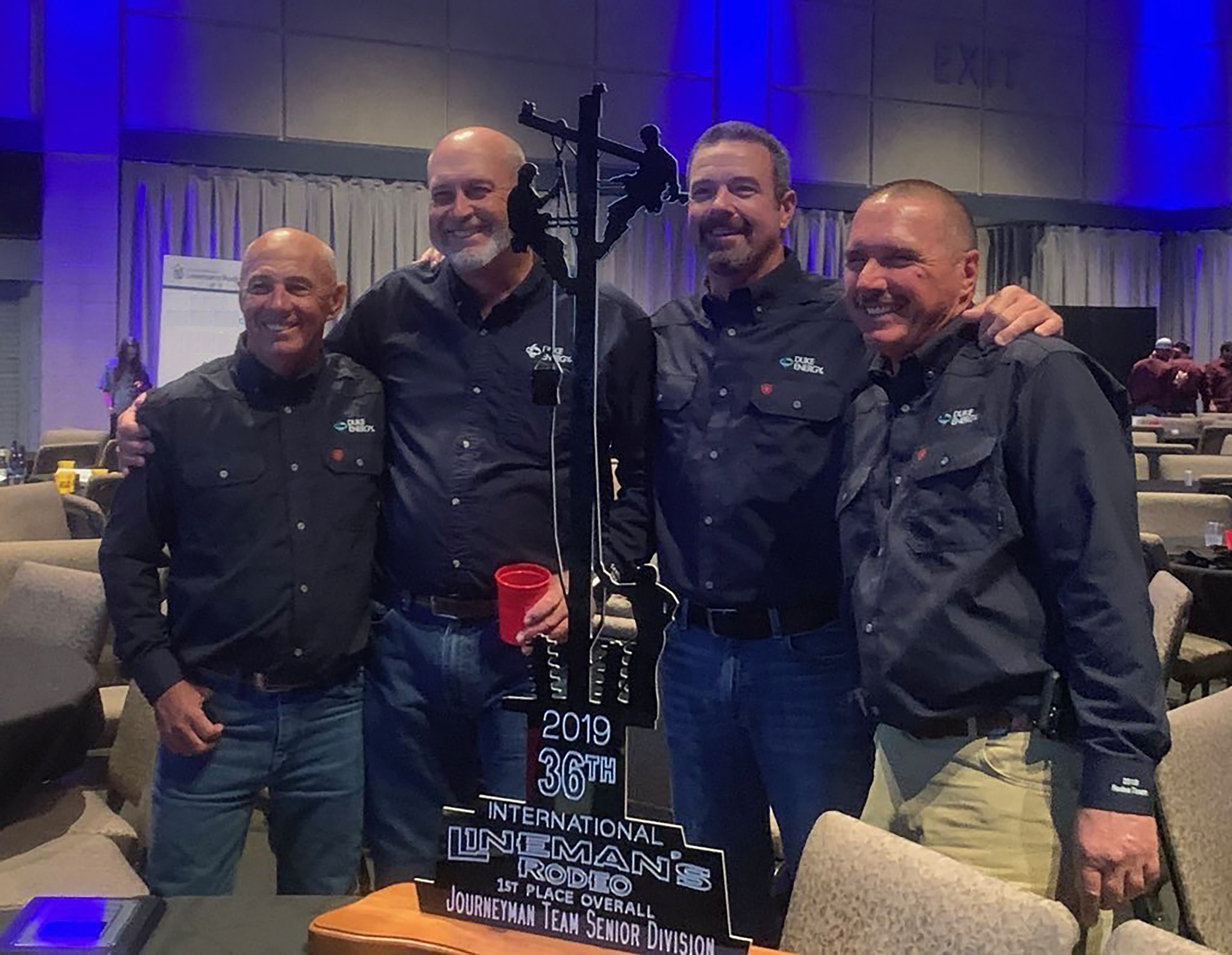 The Duke Energy lineworkers from North Carolina took the top prize in the senior division for competitors who are at least 50 years old.

Lineworkers from the United States and several countries compete in Bonner Springs, Kan., at events testing skills such as rescuing an injured teammate, repairing equipment and climbing poles. Competitors are judged on speed, agility, technique and safety procedures. More than 1,000 from the United States, Canada and Australia participated this year. 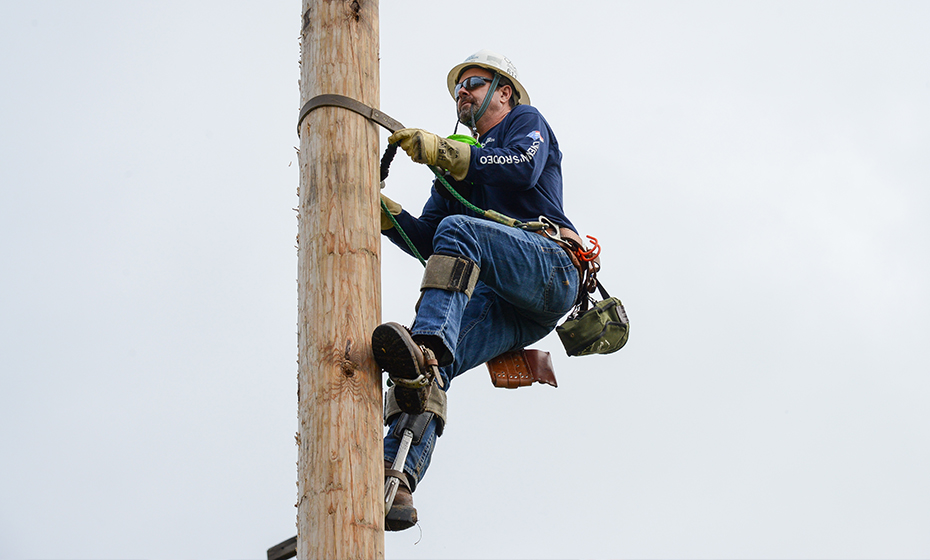 Haynes during the speed climb event at the International Lineman's Rodeo.

“We’ve been at it for quite some time,” said Haynes, who’s based in Marion, N.C. “I’ve been rodeoing since 2005, and I wanted first place, but I never played out in my head what the emotions would be.”

As the team walked off the stage with their trophy, more than a dozen of their teary-eyed co-workers and family members were waiting to congratulate them for the win that nobody expected. 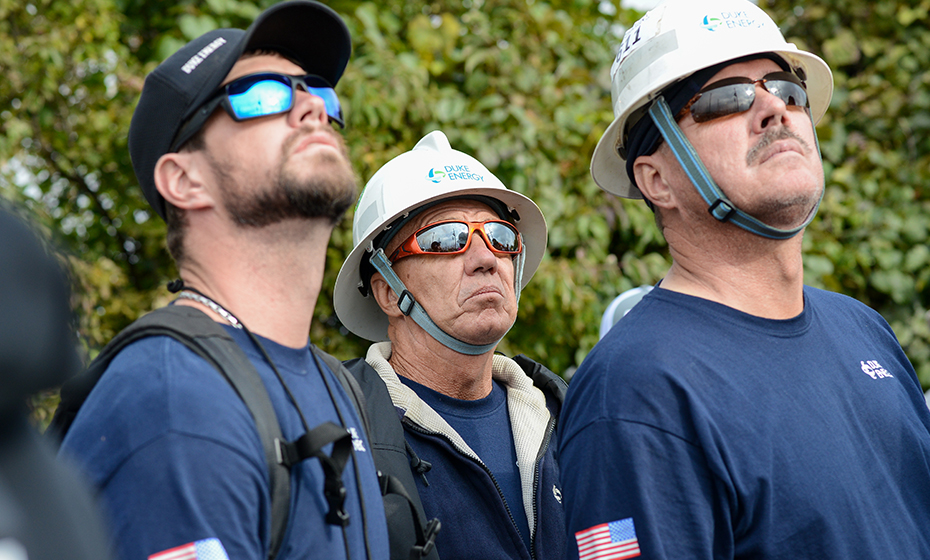 Phillips and Walker watching the competition.

The rodeo conditions were rough – it was cold and rainy – and Phillips was battling a cold that snuck up on him the day before the competition. For lineworkers though, conditions are rarely perfect, and they don’t quit when things get tough. They’re used to working in all kinds of weather, from hurricanes to ice storms, and Phillips was determined to compete in his last rodeo before retiring in 2020.

They decided to take it one event at a time and rest a little longer than usual in between each of the four events. Haynes said he worried that Phillips, who works out of Charlotte, N.C., wouldn’t have the memorable last rodeo they all hoped for, but their plan worked – they finished the competition with two points less than a perfect score. 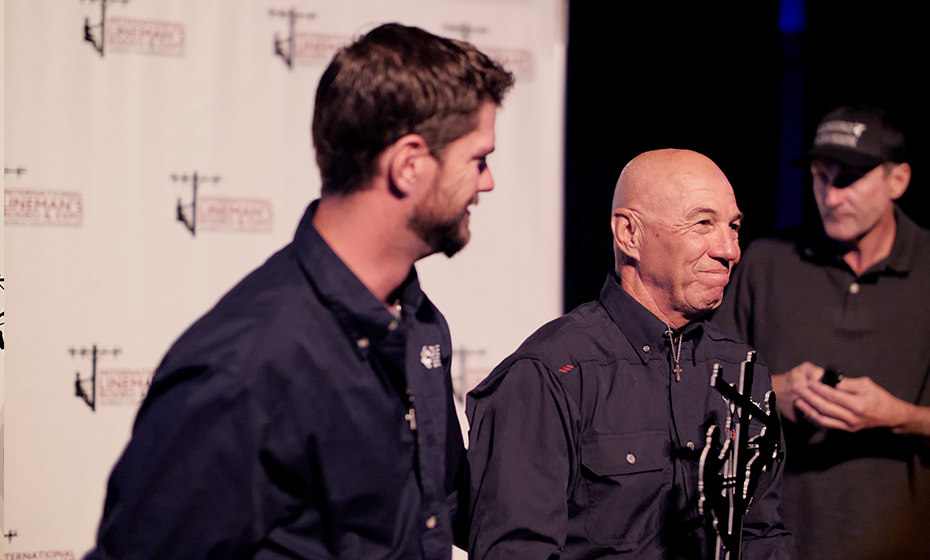 Phillips and his son Harry, who's also a Duke Energy lineworker, at the award ceremony.

“I can’t ask for anything more. We all gave 110 percent,” Phillips said. “We’re not the fastest, but we stick with the game plan and try to stay smooth.”

Walker, who’s based in Shelby, N.C., has been on a rodeo team with Phillips since 2009 and is glad the consistency finally paid off.

“First place has always been our goal, but it’s eluded us until this year,” Walker said. “It was a special time for us. It’s a lot of hard work, but the rewards pay off especially when you have a day like Saturday.”

Learn more about the other five awards that Duke Energy competitors brought home. 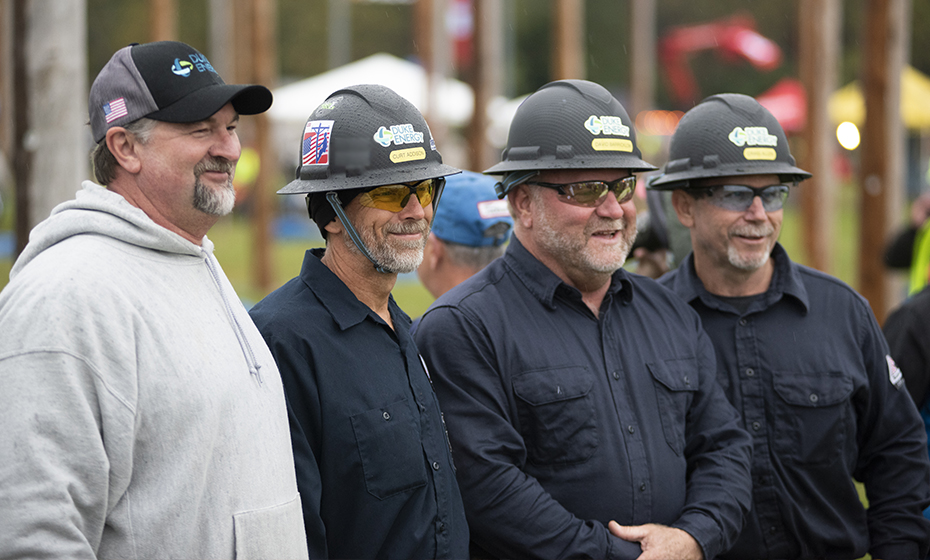 Craig Allen: “I am very thankful to have been able to participate with Dave and Curt. They are both outstanding linemen and excellent teachers – I learn from both every time we strap on the tools. I am very proud of the entire rodeo team from the Midwest. It’s amazing group of people that display a deep commitment to Duke Energy and are dedicated to honor the craft.”

Dave Barricklow: “At the age I am, it’s proof that if you apply yourself, anything is possible. I work with young men on a daily basis, and that’s the message I try to deliver. If you pay attention and apply yourself, you can be good at this.” 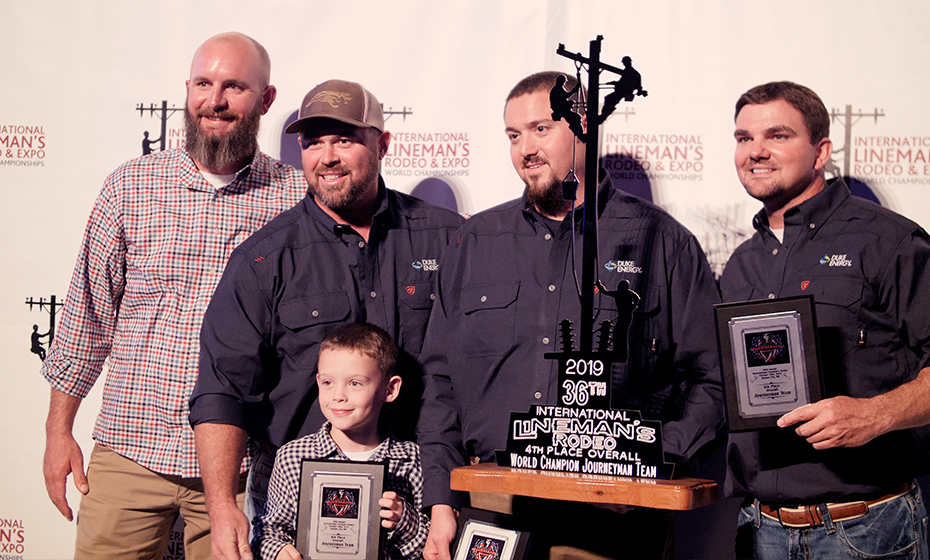 Titles: Fourth place overall in the journeyman team division, third place in the investor-owned utility division, fourth in the hurt-man rescue event and fifth place in mystery event one.

Stephen Cox: “Our support guy, Charles Sutton, was with us every step of the way. He was on the sidelines, double checking everything, making sure we had what we needed. All our wives were out there hollering and cheering us on – they also let us know when we might have gotten some stuff wrong – even my dad and boy were out there, and I couldn’t have been more thankful.”

Dan King: “With 248 teams competing, it feels good to place where we did. We hope we get the opportunity to come back next year. The guys out here continue to get better, so we’ve got to keep adapting and upping our game every year.”

Brent Whitford: "When we all get together, we learn a little bit from each other. It’s not just the win, it’s the knowledge we get from pushing each other.”