About a month before graduation, 46 high school seniors sat in a conference room at Duke Energy’s Toddville Operations Center in Charlotte, N.C. They came to learn about job opportunities at Duke Energy, and they came prepared.

When recruiting manager Derrick Robinson asked, “Who already has a resume?” each student’s hand went up. 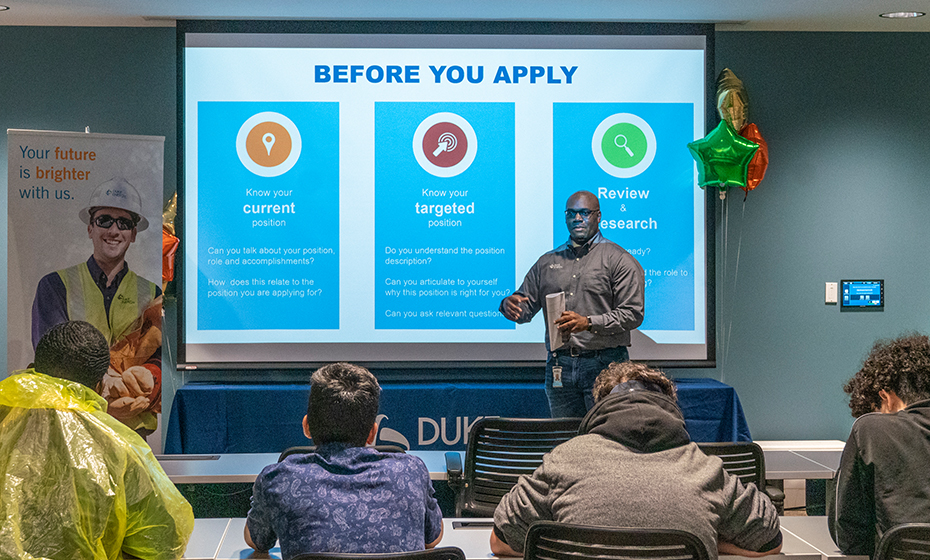 They’re prepared because of a Charlotte-Mecklenburg Schools program called Job Connect. It’s a pilot program at five high schools to prepare students who want to start working after graduation rather than pursue a four-year degree.

They receive training on preparing for job interviews and meet with local employers in industries including retail, hospitality, construction and information technology. They’ve been taught to ask potential employers questions about 401(k)s and health insurance, for example.

Susan Gann-Carroll, who leads the Career and Technical Education program for Charlotte-Mecklenburg Schools, said her goal is to make sure all 135 Job Connect students find jobs that can grow into careers. In 2014, Charlotte placed last for economic mobility in a ranking of the nation’s 50 largest cities, and Mecklenburg County ranked 99 out of 100 – Job Connect is one of several approaches to improving mobility.

“I know what’s on the other side of graduation,” Gann said, “and it might not be a nice reality. They could struggle.”

According to a report from Leading on Opportunity (a task force working to improve Charlotte-Mecklenburg’s economic mobility) nearly half the children born in the lowest income quartile will stay there as an adult if they don’t earn a college degree. Education can drastically increase mobility, but education doesn’t have to be limited to a four-year degree.

The same report expects half of the jobs available in North Carolina by 2024 to require middle-level skills – skills that require more training and education than a high school diploma but less than a four-year degree. The report also predicts there won’t be enough workers to fill the jobs. While middle-skill jobs will account for 55 percent of openings, only 44 percent of North Carolina’s workers are expected to be trained at the middle-skill level. 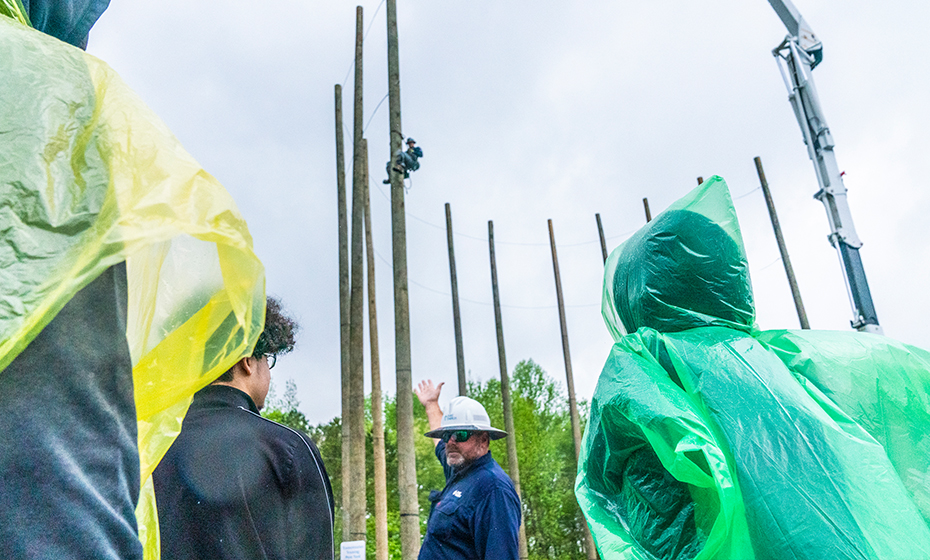 Entry-level transmission lineworker Landon Dixon demonstrates climbing while his supervisor, Barrett Gosnell, tells students about safety precautions and the training that qualified Dixon for his job.

Sidney Echevarria, who works for Duke Energy’s Workforce Planning and Development team and is chair of Charlotte-Mecklenburg Schools’ Career and Technical Education advisory board, organized the event at Duke Energy for students to learn about opportunities in the middle-skill level.

“You don’t have to just get a job,” Echevarria said, “you can get a career at a company like ours.”

Across the seven states it serves, Duke Energy plans to invest $25 billion over the next 10 years to make the grid more intelligent, reliable and secure. Making these improvements will require skilled workers – including nearly 900 lineworkers this year in the Carolinas alone.

Duke Energy Vice President of Transmission Maintenance and Construction Buddy Rogers said he thinks building relationships with these schools will help make sure the company has the talent it needs to complete this work. 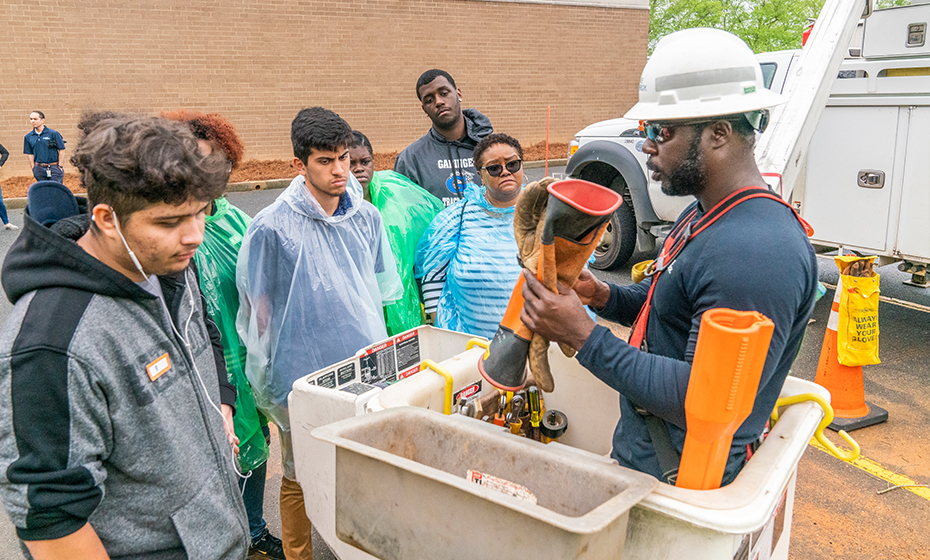 Distribution lineworker Brian Moore shows students a bucket truck and the tools they use to work on power lines.

“This is a step in the right direction,” Rogers said.

At Toddville Operations Center, students met lineworkers who work on the transmission system, which carries electricity from power plants to substations, and the distribution system – the smaller lines that carry power to your home. They also met relay technicians who repair circuit breakers, wires and other components that allow electricity to flow through the grid.

With a high school diploma, and in some cases a certificate or two-year degree, the students could earn a starting salary around $50,000 plus overtime. With 10 years of experience, that can double. The students were surprised by the earning potential and the types of jobs available at Duke Energy. 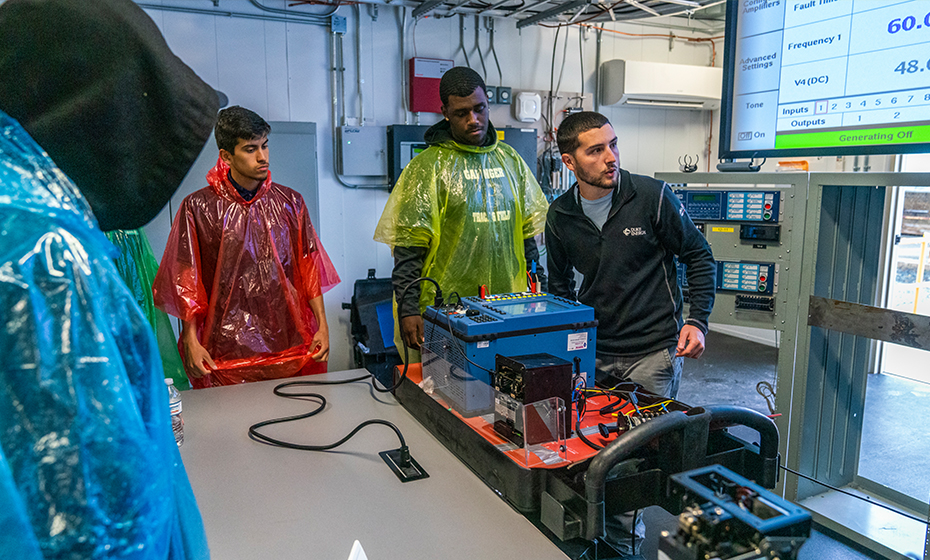 “You could see lightbulbs going off,” Kimberly Tigner, who teaches the students soft skills, said.

One student told Tigner that they would want to work for Duke Energy if he could work on solar panels, and the student was able see that Duke Energy does have solar.

“Don’t think you need a four-year degree to make a lot of money if you’re willing to work hard,” Jeff Williams, Duke Energy general manager of construction and maintenance, told the students.

Williams, who has an engineering degree, has worked for Duke Energy for 25 years in a variety of roles. He said in addition to the income potential, he appreciates the opportunity to learn new skills and serve a purpose: powering his community. 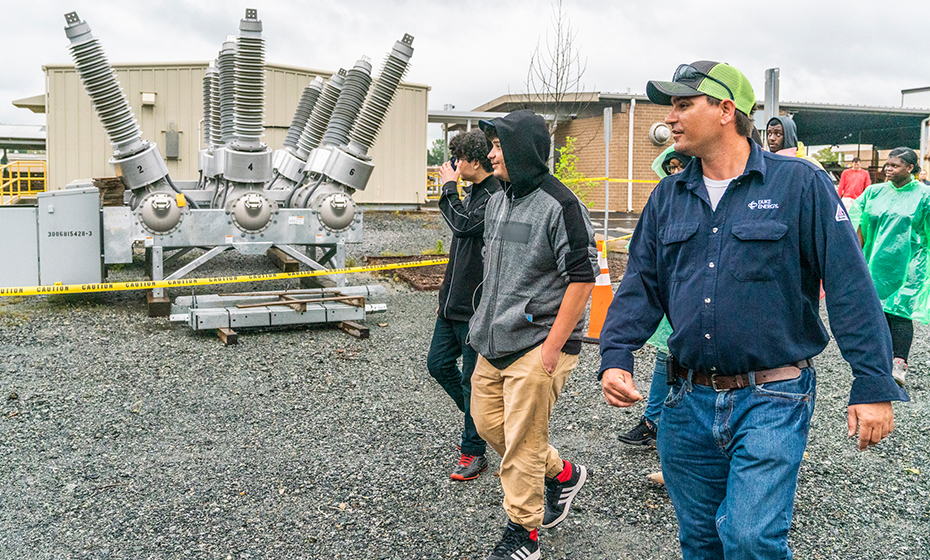 Transmission trainer Joel Tierson talks with student Christian Flores, center, about equipment at Toddville -- including the portable substation beside them that can help restore power faster during large outages.

Emily Henson, Duke Energy vice president of operations in customer delivery, agreed. She started with the company as an engineer after college and now leads an organization of more than 2,000 people responsible for the distribution grid in the Carolinas. While most people associate maintaining the grid with the manual work of setting poles and stringing lines, she said, there’s more technology now with lineworkers who use drones and computers in their trucks and relay technicians who are making the self-healing grid possible.

That’s what student Christian Flores said he found most interesting. With graduation approaching (“Thank you, Lord,” Flores said,) he’s not sure what he wants to do yet, but he’s certain he’ll at least apply at Duke Energy.

Interested in a career at Duke Energy? Click here to learn more and join the talent community to be alerted when openings are posted.