As this year’s hurricane season approaches, experts are warning residents to pay more attention to predictions about storm surge and flooding than about wind strength.

Most people who die in a hurricane die by drowning, said Jamie Rhome, storm surge specialist with the National Hurricane Center in Miami.

“We don’t evacuate for wind,” Rhome said. “Yet most people are enamored with wind and base their assessment of risk almost entirely on their perception of wind. They’re looking at and thinking about all the wrong things when it comes to assessing their risk.” 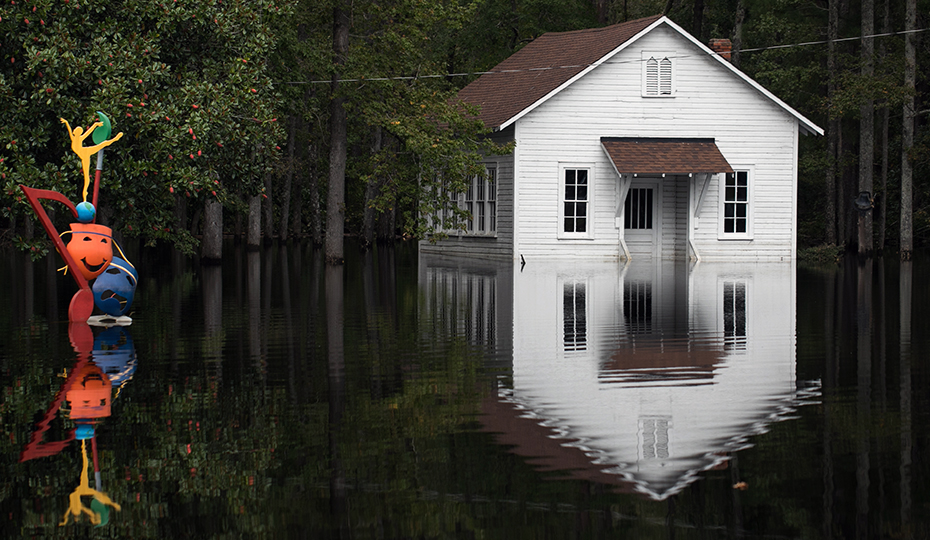 Flooding in Lumberton, N.C., after Hurricane Florence in 2018.

Even if you live inland, water damage can be a huge and costly risk.

Because of climate change, he said, this year and for years to come, residents of the Carolinas and Florida could see more unusual storms like last year’s two major hurricanes – Michael in October, which caused catastrophic damage in the Florida Panhandle, and Florence in September, which devastated eastern North Carolina. 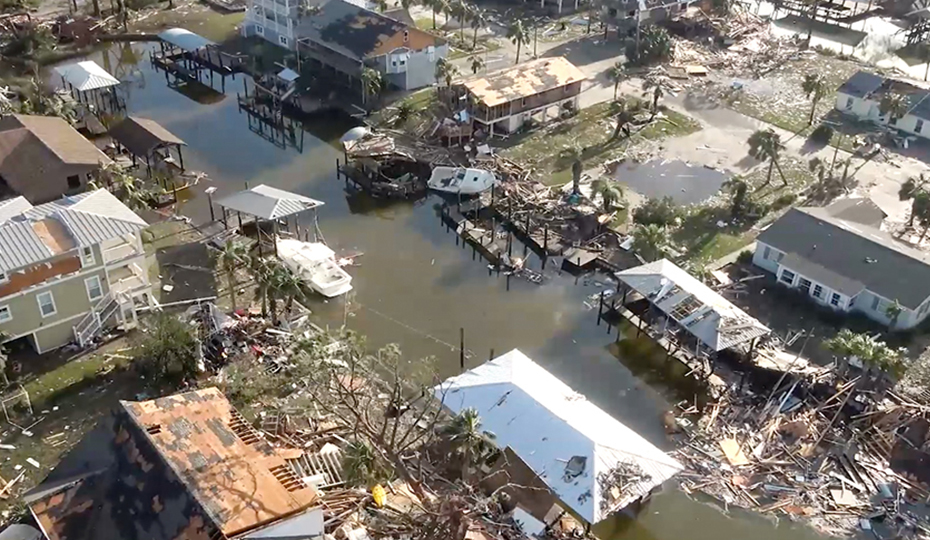 Damage in Mexico Beach, Fla., after Hurricane Michael in 2018.

“Take Hurricane Florence, for example. At one point, I expected it to be a fish storm and remain in the Atlantic,” Thompson said. “It was able to undercut central Atlantic high pressure and track west, which no other storm in history had ever taken from that point. Those types of odd occurrences may be more frequent as we go forward in the future.”

Florence was the wettest tropical storm ever to hit North Carolina, dumping up to 35 inches of rain in places, with flash flooding persisting for a week. Some areas were still recovering from damage two years earlier when Hurricane Matthew caused 29 deaths in the Carolinas – all but one due to flooding, according to the National Hurricane Center. 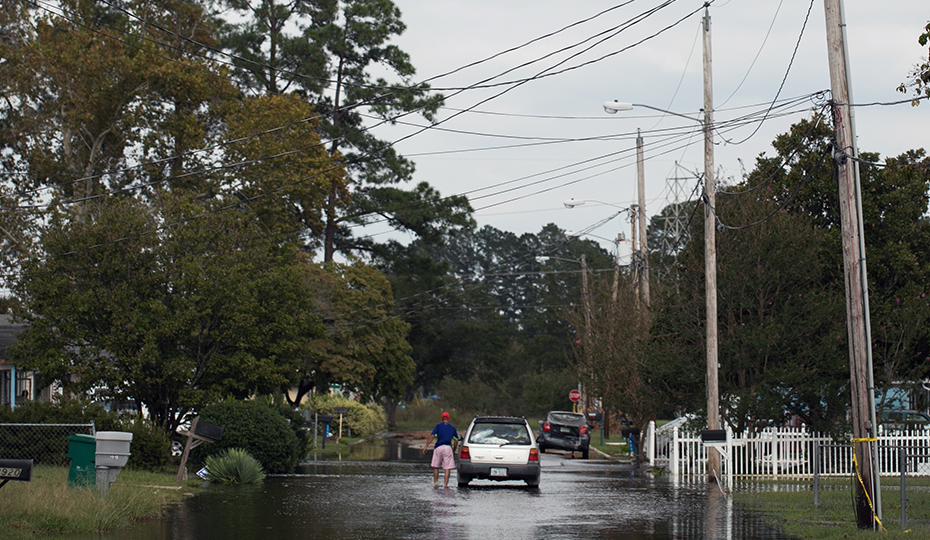 Flooding in the inland town of Lumberton, N.C., after Hurricane Florence.

Keith Acree, public information officer with North Carolina Emergency Management, recommends residents buy flood insurance – even if they don’t live in a flood zone. “In storm after storm after storm, in Matthew and in Florence, we clearly saw those with flood insurance were able to recover faster and rebuild faster than those who didn’t have it,” Acree said. “We strongly encourage people to purchase it. It’s relatively inexpensive if you’re not in a flood zone.”

In anticipation of this year’s storms, Rhome is already working with officials in Florida, the Carolinas and other states on evacuation plans. He and his colleagues at the National Hurricane Center said that in most cases you shouldn’t evacuate unless you’re ordered to. 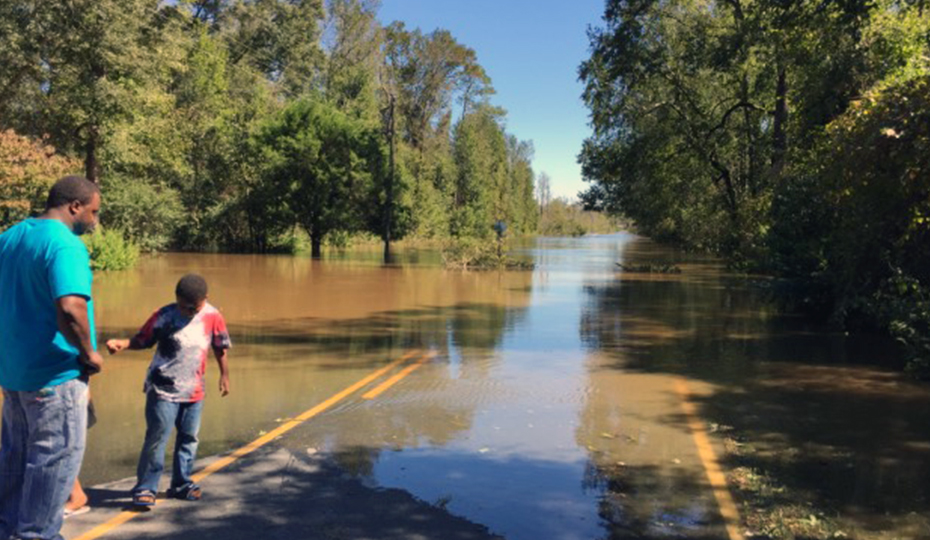 Flooding in Clinton, N.C., after Hurricane Matthew in 2016.

“If you’re away from the threat of storm surge, several miles inland, and live in a secure structure (not a mobile home), you should consider staying right where you are,” said Richard Pasch, senior hurricane specialist at the center. “Over-evacuation is an issue. I know it’s a frightening experience to go through these things, but you really should consider how difficult it will be if you leave. The traffic jams before Hurricane Irma were a harrowing experience.”

As hurricane experts prepare for the new season, they say you should be getting ready, too. Rhome has already tested his generator. He’s got his flashlights handy. And he’ll stock up on food and water.

“People have got to become more self-reliant and have food and supplies on hand to be 100% self-sustaining for three to five days,” he said. “If you barely get through a hurricane and you need water, you’ve poorly planned.”

Thompson advises residents to pay close attention to forecasts and the National Hurricane Center for the latest information. And if they lose power, he urges patience.

“Major storm restoration requires massive coordination,” he said. “At Duke Energy, we’re able to leverage thousands of resources from our Midwest, Florida and Carolinas jurisdictions to stage crews near affected areas and restore power faster, but that may take up to a week depending on the storm.”

Tips: Stay ahead of the storm

“If a person or family does those kinds of basic things, it puts you ahead of the game,” said Keith Acree of North Carolina Emergency Management. “Follow media closely and follow the direction of local emergency officials. If they don’t tell you to evacuate, don’t.”

More information: ready.gov for a hurricane checklist and safety information.