Editor’s note: This story and photos were captured before the pandemic. Duke Energy employees are following stringent measures – including wearing masks and social distancing – to work safely while they perform essential work to keep the lights on. You can learn more about how we’re working safely during the pandemic here.

When Suzy Macke shows up, it’s because there’s a problem. Being able to fix it, she said, is the best part of her job.

Macke is a lineworker in Cincinnati. She’s a troubleman, which means she rides solo and is the first responder for most calls from customers. If she can fix it, power is restored faster because the customer won’t have to wait for a larger crew to be dispatched and make repairs. 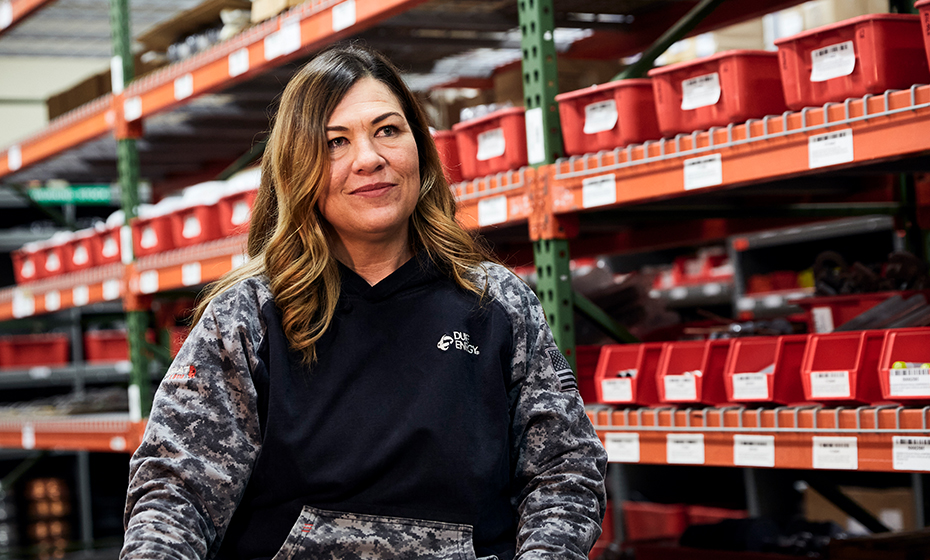 In 2019, her district had 6,000 requests and troublemen like Macke were able to clear about 3,000 without having to call in another crew.

“We were able to get the lights on, get things fixed – even if it was just temporary to get us through until we could get a crew in,” Macke said. “The fact that we could clear half of the tickets in our district is pretty impressive with lone workers.”

Macke has been a lineworker since 2009. She studied journalism in college, so it’s been an unexpected career but one that allows her to do the things she loves: be outside, do something different every day and help others. Macke took over Duke Energy’s Instagram (@duke_energy) to show us a day in the life of a troubleman. Here’s how it went. 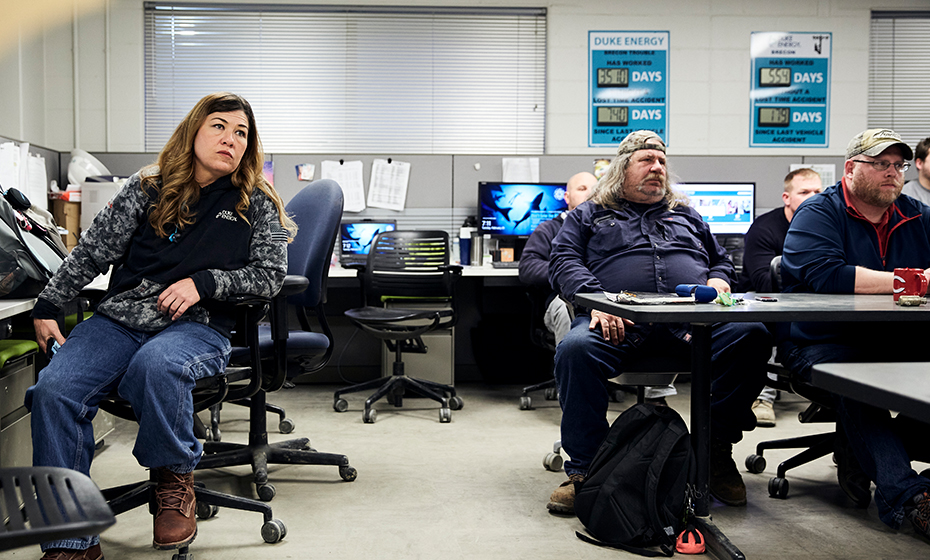 Her day starts at the Brecon Operations Center with a team meeting. They review announcements, go over safety briefings and get their assignments for the day. The crew covers the Ohio-Kentucky corner – the southernmost point of their territory is about 45 minutes from the northernmost, so they are strategic about who takes what call to cut travel time between jobs.

As the lone female lineworker in her district, Macke is the only woman in the room.

“Let’s just be honest,” she said. “I don’t look like the other linemen. I have friends who every time they drive past a bucket truck look up to see if there are braids sticking out from under the hardhat because they know it’s me.”

Duke Energy has strengthened its commitment to hire and retain more women, and Macke wants to do the same. When she started, another female lineworker, Cindy Greive, made the job look easy, helped Macke learn and made her feel she could do the job. Now, Macke mentors women who work at Duke Energy and other utilities through social media. 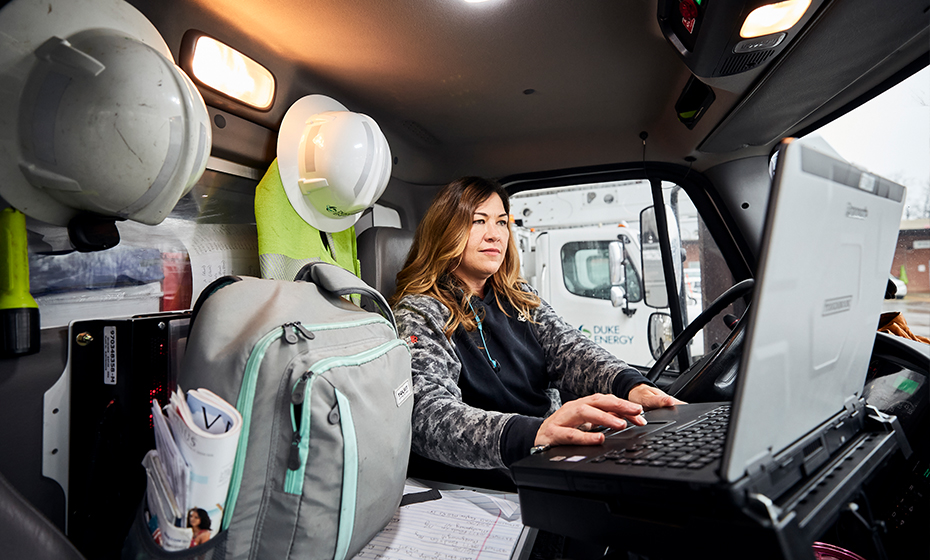 Over the last 11 years, she’s learned how to make the job look easy like Greive did. One piece of advice: always have a well-stocked truck because you never know what you’re going to need. She could be repairing a crossarm, insulator, bad connections or making any number of repairs.

“It’s always good to make sure I have plenty things that I put service lines back up with because the squirrels in Cincinnati are really hungry for aluminum,” she said. “I spend a lot of time putting stuff like that back up.”

Once her truck is prepped, she heads to today’s first job: changing a broken traffic signal.

It’s not always broken poles or trees down, she said. Sometimes it’s little stuff like this, too. In between her other two jobs of the day – fixing a transformer to restore power at an apartment complex and digging up and repairing an underground line – Macke keeps an eye out for things like decaying trees that could be a problem in the future. 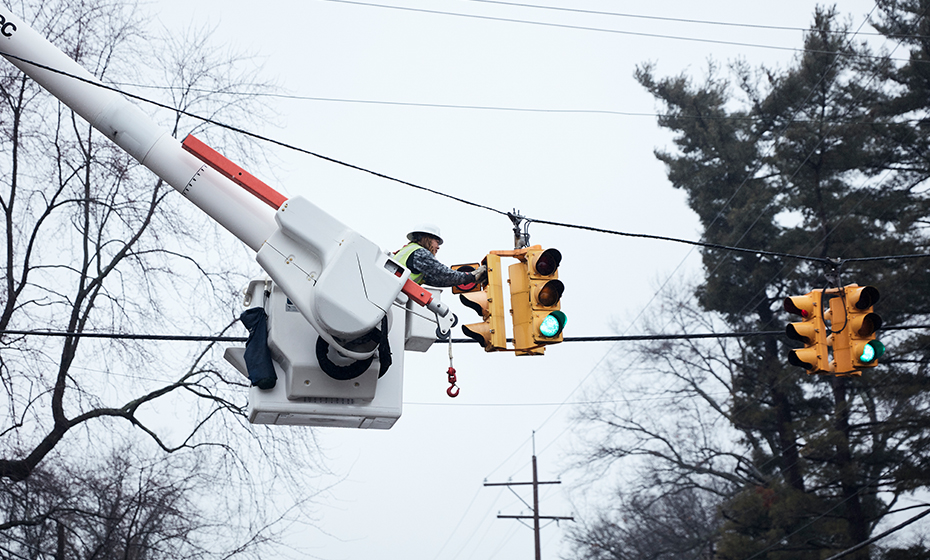 Macke worked as journeyman lineworker and crew lead before her current role. It’s her favorite of the three because she talks with customers more and troubleshoots different repairs daily. She works nights, weekends and holidays, and because it’s emergency work, she works in all types of weather.

But Macke doesn’t mind. She likes the adventure, and helping others feels like a public service. Macke grew up on a ranch in New Mexico with plans to become a journalist or a lawyer, but, wanting to work outdoors with her hands, she started her own landscaping company and worked a few other jobs before learning about linework.

She failed the physical test on her first try. Instead of giving up, she met with a personal trainer to build upper body strength and came back a year later. She passed.

“Don’t get completely discouraged if you don’t pass,” she said. “Just figure out what you have to do to pass it the second or third time.”

Macke is still learning, too. When she goes on vacation, she inspects how poles are set up, and when she’s working at home, she’s thinking about how she can rig heavy equipment and make repairs with less physical strain.

“Physically it’s a hard job,” she said, “but you can work smart and make it a lot easier on yourself.” 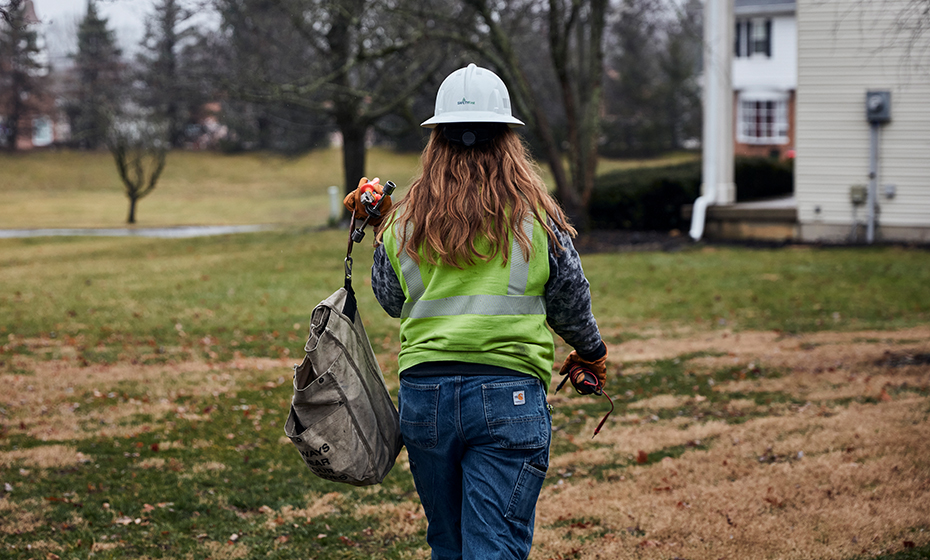 When she started, she didn’t think she’d ever get the hang of it, but she said she wants others to know that if you’re willing to put in the work, it does get easier.

“And here I am 11 years later trying to hold the torch for the girls that are coming behind me,” she said, “because there will be more.”