In some ways, The Tribble Center in Seneca, S.C., is a typical warehouse: boxes packed for shipping, work tables full of men and women constructing esoteric instruments.

Yet, the center, which provides services for people with intellectual disabilities, is much more.

Stepping through the crowd in the warehouse, Day Program Manager Donna Thompson starts rattling off names.

There’s Mona, who moved in with her sister in Upstate South Carolina after their mother’s death. “She just fell in love with coming to work,” Thompson said. “She told her sister, ‘We have to stay here. This is my job. This is my work.’” 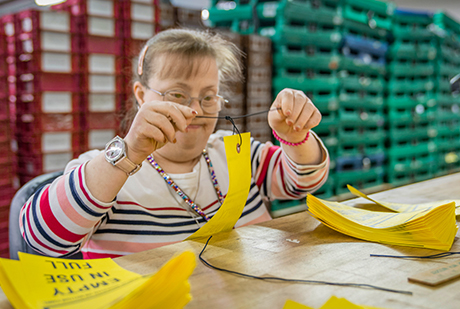 There’s Joseph, whose smile is more vibrant than the sunlight pouring in ribbons through the windows. “He’s very diligent at his job,” Thompson said. “He loves to work. But he really looks forward to party time, and the holidays. He starts in November, carrying his Santa list. He’s always ready with that list in his pocket.”

And there’s Terrance, who rattles off facts and figures at a rapid pace. Thompson glows, her hands together, as if in prayer. “His memory is phenomenal. He can remember things, people from 20 years ago. He never forgets anything, the good and the bad.”

More than just a job

The Tribble Center sits off S.C. 188, a handful of miles from downtown Seneca and a stone’s throw from the placid expanse of Lake Keowee, among rolling hills. It exists to serve “persons with disabilities and their families” to help them “experience a higher quality of life.” That’s its in-a-nutshell purpose, words on a brochure or a webpage.

Those words, however noble, are inadequate. The Tribble Center – its staff and guests – is much more.

To some, it’s a home. Donna Thompson certainly sees it that way. She’s spent most of her life working at the Tribble Center, 37 years.

To Jerry Mize and the people on his staff, it’s a calling. As executive director, he is responsible for budgets and planning, working with the board of directors to implement its vision. 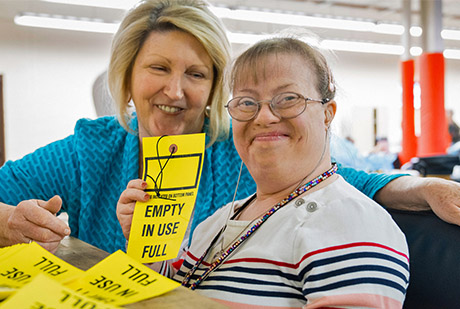 But the most important people at the Tribble Center are the 175 people who receive services, from assistance in leading an independent life to residential services to vocational training.

And that’s where people like Mona Callahan, Joseph Gibson and Terrance Simpson come in. They are among the 109 who come here five days a week to work.

“Most of our clients can be productive, so we made a decision to find businesses to partner with and go out and get our people some work,” Thompson said. “Jerry Mize and I started out in the early 1980s, just pounding the pavement, going into the local businesses. We had to sell our people and their abilities to give them an opportunity.”

“Back then, I honestly didn’t know if it would work,” Thompson said.

It has. Today, the partnership between the Tribble Center and Oconee Nuclear Station is strong, lasting more than 25 years. Each year, Tribble Center clients produce 25,000 smears (discs of filter paper) for the plant, which are used to monitor radiation levels on equipment, and 10,000 air filters – all by hand.

The partnership is a financial boon to the Tribble Center, too. In the past year, the center brought in $211,000 from its contracts with companies like Duke Energy – and $195,000 went directly to Tribble Center clients.

The financial boon is ancillary. People with intellectual disabilities, according to a study published in the Journal of Intellectual Disability Research, are unemployed at a rate as much as four times higher than that of the general population. They are less likely to have social interaction and participate in leisure activities. 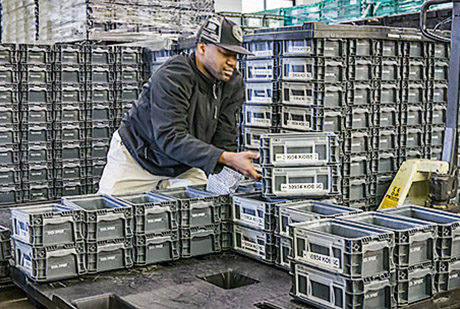 That’s not the case for Tribble Center clients. In addition to their work – Duke Energy is one of the organization’s four business partners – residents participate in arts and crafts, run a catering business and enjoy outings to places like the World of Energy, Oconee Nuclear Station’s education center, among a multitude of activities.

Going out to the movies, shopping at the grocery store, “those little things that you or I forget about, that we take for granted, they truly appreciate,” Thompson said.

Work therapy, then, is just one aspect of a comprehensive approach to rehabilitation.

“Our focus is to try to get them into the working world with the support they need to be successful,” Thompson said. “There is a lot of emphasis on coming into work, and now they have work skills they didn’t use to have.”

Thompson obliges dozens of requests for hugs, and listens to stories about football games and songs on the radio. She smiles, the portrait of patience, practiced every day for nearly 40 years.

“The one thing that I love to see is someone who succeeds,” she said. “It may be a job, it may be tying their shoe or going on their first outing. To see that excitement? That never gets old.

“Sometimes when you are having a bad day, you walk in one of those workshops, they tell you they love you, I just love that.”

To volunteer or learn more about the Tribble Center of Seneca, S.C.: thetribblecenter.com