After the tornado hit, taking with it her horse, her house and most of her belongings, Laura Schmidt wondered how – and even whether – to rebuild.

She and her husband, Mark, loved the farm where they raised their two sons in Peach Grove, Ky. They had lived there 12 years, and Mark custom-built their home. But after the storm in 2012, the land was unrecognizable. The F4 twister stripped away a forest of oak, maple and other grown trees.

“It just took a long time to figure out what we wanted to do,” said Schmidt, who now measures life according to “before the tornado” and “after the tornado.”

Before the tornado, they lived in a sprawling two-story house on part of 200 acres where Laura Schmidt’s parents lived and raised cattle. Mark Schmidt worked in construction; Laura Schmidt worked for Duke Energy. She has been with the company 28 years and is now an investment and strategic planning analyst in nearby Cincinnati.

When she arrived at work the morning of March 2, 2012, she was surprised to see TV trucks parked outside. A co-worker told her a storm was brewing. As they listened to updates during the day, Schmidt felt a growing sense of foreboding.

“It was just kind of scary,” she recalled. “My son was home from high school. I told him to make sure the horses were in their stalls … and to close everything up. I left work about 15 minutes early. It was really eerie. You could see stuff floating in the sky, pieces of paper.”

She arrived home just in time. Several minutes after she took cover in the basement with her husband and younger son, the tornado hit. “It was really, really loud,” she said. “My husband describes it as like a bunch of elephants running across the floor.”

The storm ripped the second floor from their house and sucked the ductwork out of the basement. What the winds didn’t destroy, torrential rains did. The tornado also destroyed the back end of her parents’ home nearby and sent a shard of metal into the leg of Schmidt’s horse Indian Slipper, who had to be put down.

Thanks to the power of social media, friends and strangers showed up that evening to help. “Within an hour, we heard chainsaws,” Schmidt said. “They were clearing off the driveway. It’s over half a mile long.”

The next morning, 200 more volunteers gathered. A week later, around 70 Duke Energy employees and family members arrived to help. “It was just unbelievable,” Schmidt said. Though they work for a corporation, that day her co-workers felt like one big family.

“It was just a lot, a lot of work to do,” Schmidt said. “I think it was harder living on a farm because you have so much land and downed trees and fencing down and the barn down. Six years later, we’re still finding stuff: bolts, nuts, nails, coins, a piece of plastic from the washing machine. We looked for a lot of things for weeks and weeks and months and months. It was just gone. Like the roof on the house. We never did find it.

“Afterwards, you just do what you’ve got to do.”

They decided that what they had to do was rebuild.

First floor of home after tornado

Mark Schmidt took a year off working on other people’s homes to build a new one for his family, smaller this time since their sons are grown. They moved back into their house in May 2013. Laura Schmidt’s parents repaired their home and moved back, too. Life went on. Schmidt's older son, Tanner, who wasn’t home when the storm hit, got married in 2016. Her younger son, Heath, graduated from Morehead State University in 2017.

“We’re all OK and we’re all safe, and that’s the biggest thing,” Schmidt said. “But there are days when you think, ‘Oh, I wish I had that picture, or that keepsake you got from your grandma.’”

Despite the trauma of that day, storms don’t scare Schmidt. But if there’s a threat, she pays close attention. “We just go to the basement,” she said. “In our new house, we have a room, it’s all concrete, a storage area. That’s the place we go to. We call it the bunker room. I just really take it seriously.”

And so, she said, should everyone. 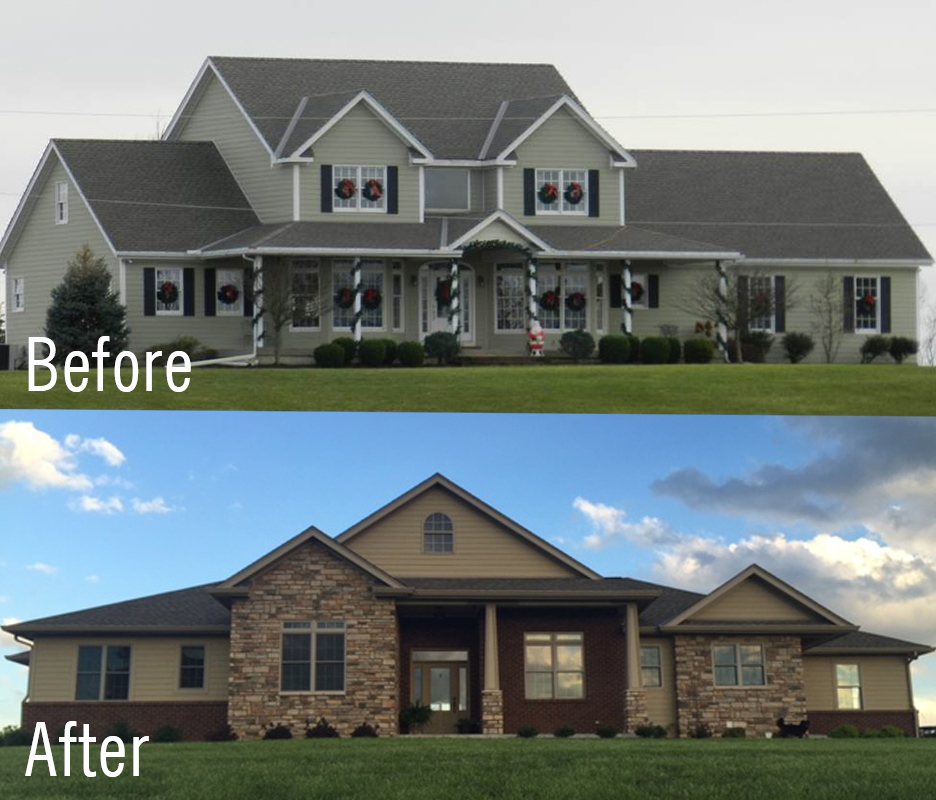