Harvey borrowed from the tiny house movement to create his tiny bunkhouse, a self-contained living space.

The ladder leads to the loft bedroom in the bunkhouse.

The bunkhouse has a loft bedroom.

Gernon Harvey stands in the doorway of his tiny bunkhouse, separate quarters for his guests.

The tiny bunkhouse is connected to Harvey's main house.

Harvey feeds his two mini donkeys, Elsie and Kale. They live on the nine-acre farm.

Harvey plans to use photovoltaic solar as an energy source.

Borrowing from the tiny house movement, Gernon Harvey recently built a 440-square-foot guest house for visiting family and friends. And it’s been a big hit.

After 24 years in nuclear operations at Duke’s McGuire Nuclear Station, he returned to school at Appalachian State University in Boone to study “appropriate technology,” which he calls “renewable energy with a good dose of building science and construction management” thrown in. 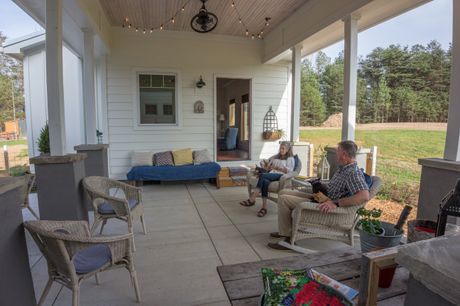 Gernon Harvey and his wife, KK, lounge in the breezeway area between their main house and the tiny bunkhouse.

He and his wife, Karen – whom everyone calls KK – needed storage space for some of the stuff they couldn’t fit inside their house and asked their builder to construct a storage building. But KK decided they should convert the 12-by-16-foot storage unit to finished space to allow guests a room of their own. They called it the “bunkhouse,” and it changed the way they live.

A cozy space for guests

Their grown children stayed in the bunkhouse when they visited and liked the coziness of it.

They loved their bunkhouse in Boone, so they wanted to replicate it at their new nine-acre farm in Denver, N.C., about 25 miles northwest of Charlotte. Physically, the main house and guest house are separate spaces, but they’re connected by a covered porch. (There are tax implications when you have a separate, detached dwelling on your property.)

Unlike the minimalist bunkhouse in Boone, which had no running water, the annex in Denver is entirely self-contained. It has everything a person could need – heat, water, an efficiency kitchen, a full bathroom and a loft sleeping area. There’s a sleeper sofa, twin beds and cots the family can bring out, if need be.

It has just what you need – and nothing you don’t.

Harvey built his house in the greenest way possible. “And the guest house mimics everything about the big house,” he says, right down to the “phase-change material” (also called smart thermal storage material), which helps keep it naturally cool in the summer and warm in the winter.

“The material absorbs extra heat during the day and radiates it back out at night,” he says of the material he was introduced to while a student at Appalachian State. His heating bills are about a third of what they’d be in a typical house.

One tankless water heater serves the space, and Harvey is planning to add a photovoltaic solar system to the roof to supply power to the main house and annex.

The guest house has good cross-ventilation, so it stays cool in the summer. It has a mini-split heat pump for both heating and cooling, but the house is passively heated by solar energy.

‘Just what you need’

The kids love having their own guest house independent of the main shelter. Its 14-by-20-foot footprint lives larger because of an 11-by-12-foot sleeping loft accessed by a ladder. There’s a full, 65-square-foot bathroom with a shower stall. The tiny kitchen has a microwave and dorm-style fridge.

“It has just what you need – and nothing you don’t,” says Harvey.

In fact, that’s probably a good way to define “tiny house.” Some people in the tiny house movement, which seems to swell by the day, define "tiny" as 500 square feet or less. That’s a little larger than two parking spaces, says Hilary Davidson, sustainability director at Duke Energy, whose job entails studying the social, economic and environmental impact of business and energy decisions.

Interest in tiny houses seems to be growing. There are even conferences devoted to the concept, including one in Asheville, N.C., April 2 and 3, where you can bring your own house!

Davidson believes the tiny house trend is here to stay: “Millennials are looking for a simpler life,” she says. “And many Americans are still budget-challenged and may be for some time. The tiny house movement addresses both those issues.”

Given that the tiny house footprint is already less than a conventional home, it would be less space to heat and cool. Overall energy efficiency would depend on the types of building materials, heating and cooling systems and appliances used, Davidson said. Homeowners could benefit from the savings.

“There’s more closeness inside a tiny house,” Harvey says. “You have to learn to compromise with your spouse. It has the potential to build your relationship.”