Ever since Shiva Korremla redesigned a U-shaped ground mat to place under electric transmission towers, he’s been on a mission to innovate.

The mats were too small for lineworkers to stand on and Korremla hoped the mats could be made safer. Korremla, a Duke Energy engineer, designed steel mesh mats that were larger and shaped like the letter U to support workers moving around the job site.

A key part of his process? Experimentation. 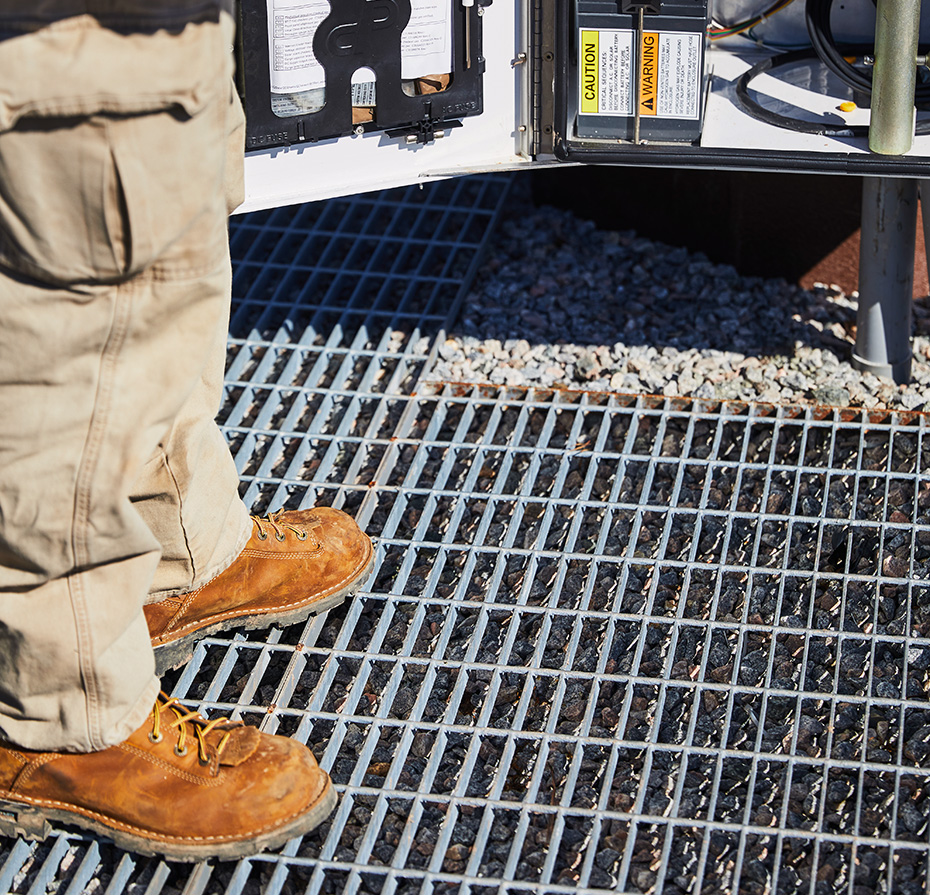 A Duke Energy worker on a U-shaped mat Shiva Korremla designed at a substation in the Raleigh, N.C., area.

“There’s a risk of failure,” Korremla said, “but, hey, without experimenting, you cannot innovate.”

Korremla, who’s based in Raleigh, N.C., developed that mindset and sense of curiosity when he was a child in Hyderabad, India. He remembers being fascinated by how the family car operated.

“We had an old car and it used to break down frequently,” he said. “I was always curious – and it motivated me to spend some time at the mechanic shop.”

It also set him in motion to become a mechanical engineer as an adult. Korremla, who’s been working as an electric transmission engineer for 14 years and recently moved to a transmission innovation and business transformation role, operates as part of a team of four. Since the launch of that U-shaped ground mat, he’s been on a mission to innovate.

“The focus has shifted, but still my inspiration as an engineer is to solve a problem,” he said.

“Shiva is always seeking new, looking for better ways,” said his supervisor, Christy Guenther. “Shiva is so good at making friends. He sees every co-worker as a peer. He really wants to build for the people who are going to use the product.” 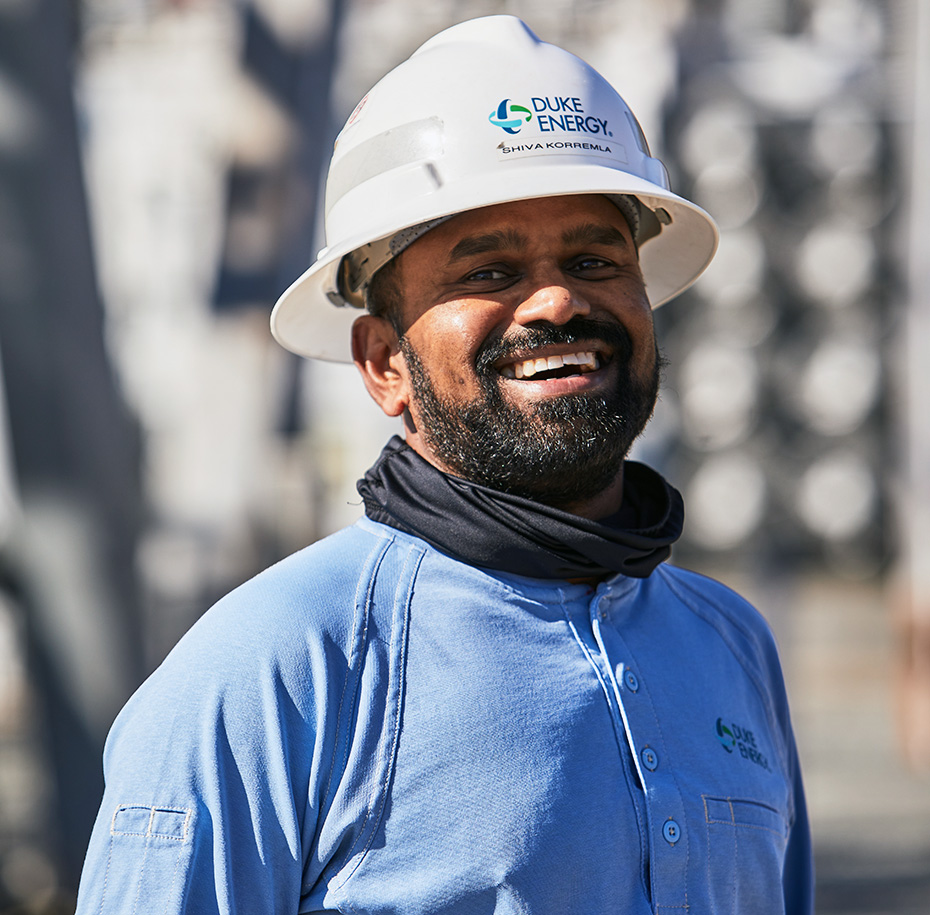 Shiva Korremla: "My inspiration as an engineer is to solve a problem."

“That’s who he is, regardless of what environment he’s in,” said Robert Lunsford, supervisor for a substation in Sanford, N.C., who has worked with Korremla on multiple projects.

As someone who’s eager to add safety and ease to workers’ lives, Korremla said the best part of his job is meeting people with different backgrounds and experiences and learning what their needs are. He’s just a phone call or text away from everyone he meets on the job. He uses their feedback to determine where his next project should begin.

Lunsford said, “If you give him any challenge – how can we improve this? – his mind goes to work.”

“I’m constantly searching and scanning how to solve this not only in the short term, but also future-proofing it for sustainability,” Korremla said.

Since the release of the ground mat, Korremla has gained momentum with digitally focused innovations to help various Duke Energy departments. Two major projects include:

An Electronic Pre-Job Briefing App: With COVID-19, it became clear that passing a paper form and a pen around a team before starting a project had health risks. Korremla launched an electronic version for smartphones – it’s easy for teams to modify and already contains 5,000 job briefs for transmission field crews. “That’s 5,000 crews that have not had to pass around high-touch paper and pen,” Guenther said. “And that sounds so small, but just to be able to meet needs so quickly and adjust – he just keeps rolling.” 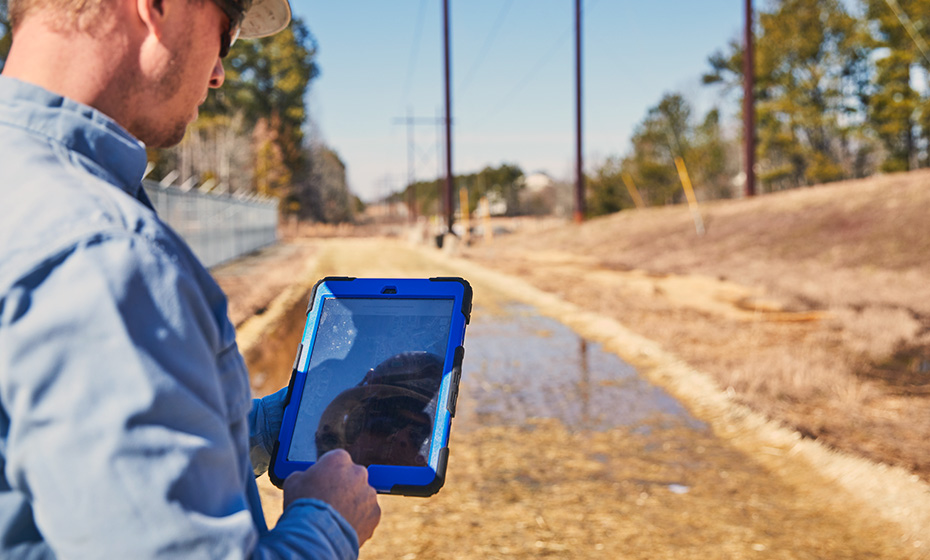 A field worker uses the right of way app to identify hazards.

A LiDAR ROW Hazard Tool: Knowing that transmission field crews face hazardous conditions like ditches and steep embankments covered by vegetation, Korremla wanted to make the terrain more visible. He built a tool using LiDAR data based on lasers that measure ranges to identify these terrain features for workers. He flowed that data into a digitized field map. The result: boosting situational awareness among crews and decreasing safety hazards.

Lunsford said his team has benefited from several of Korremla’s innovations. “If my phone rings and it’s Shiva,” he said, “I can’t wait to hear what’s next.”

When Korremla looks to what’s next with Duke Energy, he envisions more innovation.

In particular, he hinted at an autonomous device that can perform high-risk activities around power lines to keep workers out of harm’s way. He’s also in the process of filing patents for some of his products in collaboration with the company’s Emerging Technology Office.

“It’s a great feeling getting to work with my teammates as one mindset,” he said. “Without collaborative effort, we couldn’t have turned the ideas into reality. But there’s the saying: The harder you work, the luckier you get. I believe in that.”