Gene and Dona Griffin walked down a trail at Griffin Bike Park in Terre Haute, Ind. When they reached the end, Gene dusted off 10 American flags with pictures of soldiers attached to them and explained that each represented a soldier killed in Afghanistan on Oct. 27, 2009. 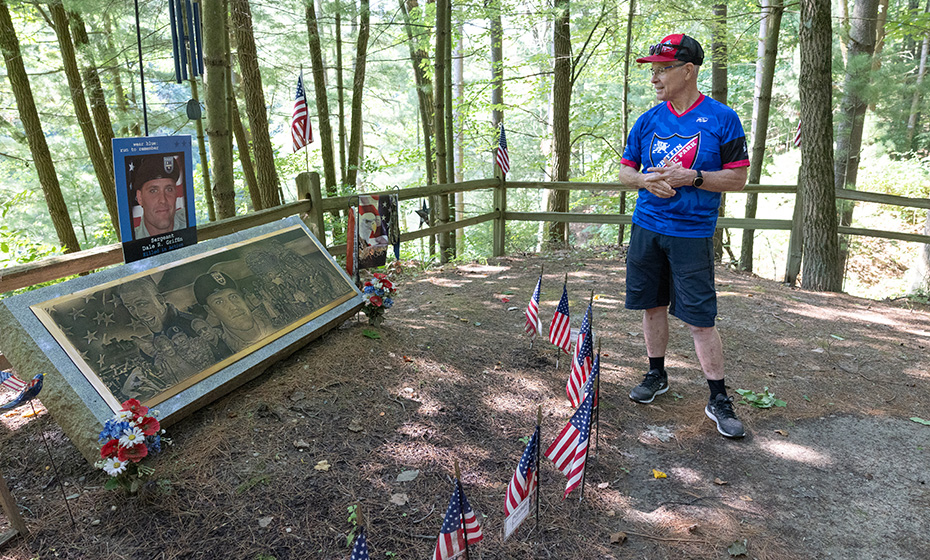 Gene Griffin talks about his son, Dale, who was killed while serving in Afghanistan and inspired his family to create Griffin Bike Park.

Their son, Dale, was among the casualties, and his memory inspired them to create a one-of-a-kind mountain biking destination. The Griffins transformed 300 acres of forest into more than 24 miles of mountain biking trails that honor their son and other soldiers from Indiana who gave their lives.

But the Griffins are not done building.

Gene and Dona have mountain biked with their three children since 1986, and their favorite place to ride was in Brown County, about 1 ½ hours from their home in Terre Haute. When Dale visited on leave in July 2009, they biked there. It would be their last trip.

The family wanted to honor his memory and Dona remembers her children asking, “Do you think we could build a bike trail?” 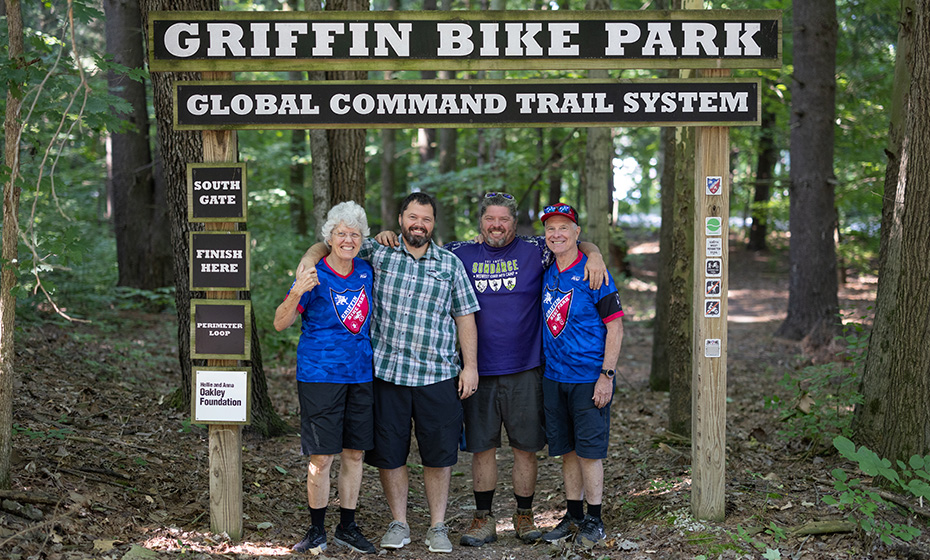 Dona Griffin (left) with her sons Clint and Blake and husband, Gene.

Conversations with the county’s parks and recreation department, donors, community members and professional mountain bikers and trail builders proved others thought it was a good idea, too. One builder, Nat Lopes, came from California in January 2014 to assess the 300 acres and told the Griffins they had potential for something bigger than just one trail.

“At lunch, he said, ‘Before we get too much further into this, I have a question. Do you want a trail or do you want a destination?’”

Over two years, they designed and built a 16-mile trail system backed by the county, $1.6 million in donations from sponsors including Duke Energy, and thousands of volunteer hours. They welcomed 3,500 people to the park’s grand opening in 2016.

The trails are free and designed so riders from beginners to pros can participate. The park has common features like a 1-mile beginner’s loop, a jump park, a dual slalom course and a skills park, but also a first-of-its-kind lake jump and a floating trail as long as a hockey rink across the lake. 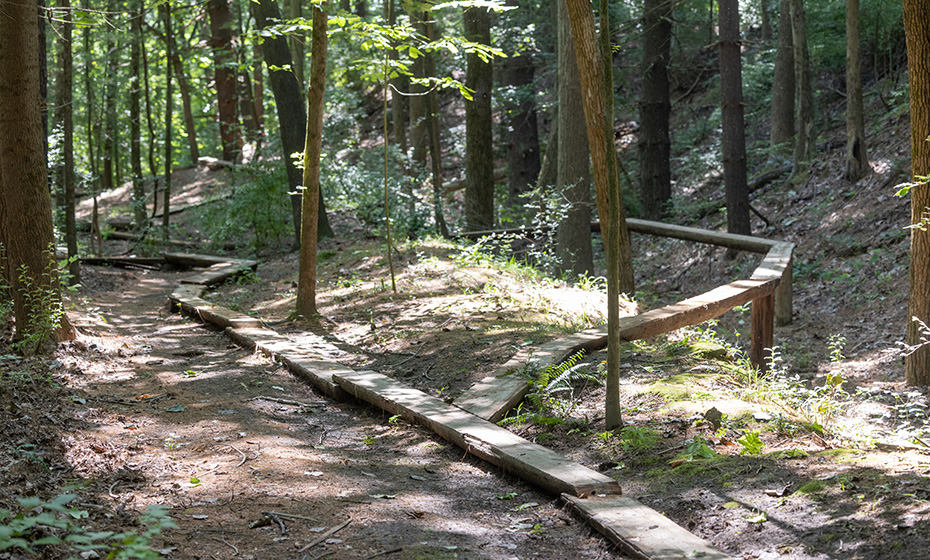 Duke Energy has sponsored Griffin Bike Park for years and recently donated more than 60 power pole to build the longest continuous log ride in the country.

The park earned the National Park Design of the Year Award from the National Recreation and Parks Association in 2017, and today, more than 50,000 people from across the country visit the free park each year.

Their newest trail, Over-N-Out, came when Duke Energy community relations manager Rick Burger called Gene and asked if he’d be able to use old power poles that needed to be recycled.

“I told him we're building a trail right now where we want to put the longest log ride in America,” Gene said, “and those would be absolutely perfect.”

The Over-N-Out trail, the longest continuous log ride in the country, was designed by Jeremy Stakeman, whose grandfather was a lineworker in World War II. He honored his grandfather with a six-foot-tall steel cut out of a lineworker attached to the trail’s entrance. The trail’s name describes its up-and-down movements and recognizes the military and workers who climb to the tops of power poles. 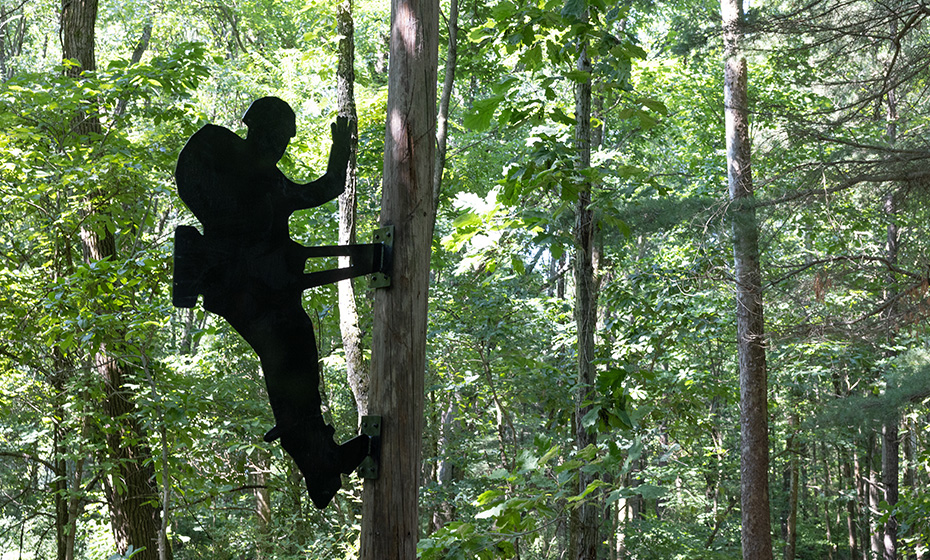 The log ride trail designer honored his grandfather, who was a lineworker in World War II, with a steel cutout of a lineworker at the trail's entrance.

“I'm on cloud nine with that name,” Gene said, “It's just so fitting.”

It’s been their mission since the beginning to honor those who served in every detail of the park. Throughout the trails, they’ve placed photos, names and biographies of veterans from Indiana who died. Griffin Bike Park is also across the street from Fowler Park, which was named for Army Captain Eugene Fowler, the first soldier from Vigo County killed in the Vietnam War. There was a plaque at the park, but Dona said his memory had been lost there, and they wanted to do more.

“Maybe 10 percent of the community knew who he was and why it was named Fowler Park, so we’ve kind of resurrected that,” she said. “It really has been one amazing experience after another. Just about when we’d get a little overwhelmed, we'd have someone say something here in the park or a store, send us a card or leave a message that made us realize we have to keep this thing going because it's meant so much to so many to people, and it's been a great thing for not just other families but our family as well.’” 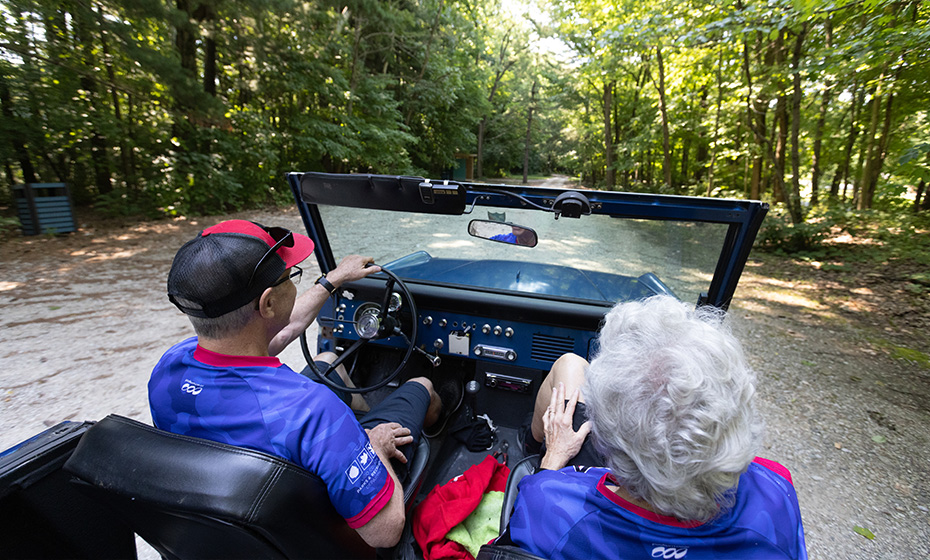 “It just makes you stop and think about the blessings of life,” Gene Griffin said, “and the price of freedom.”

The Warrior Trail at Griffin Bike Park is a shady, short path lined with color photos of more than 100 soldiers from Indiana who gave their lives. Each photo is perfectly straight and clean on its metal stakes – a standard Gene has instilled in every volunteer and trail keeper. Even in summer, the shade keeps the trail cool and quiet and provides a place for reflection.

“I've seen people sit on their bikes with their head down,” Gene said. “Then you walk up to them when it's appropriate to introduce yourself, and they say, ‘I served, and I've never seen any things like this.’”

A bronze mural on a granite slab at the end of an offshoot of Freedom Trail features photos of Dale – including one from the family’s last bike ride in Brown County – as well as photos of the soldiers who were with him the day he died.

Gene said he appreciates this trail not just for his son. As the light filters through the trees, it falls on each of the more than 100 soldiers’ photos at least once a day.

“It just makes you stop and think about the blessings of life,” he said, “and the price of freedom.”