Rick Freeman left work thinking about a conversation he had with his co-worker Brandon Garrison about how to improve a safety process at Allen Steam Station. The next day, he came back to work with an idea that could save lives in factories and power plants nationwide. 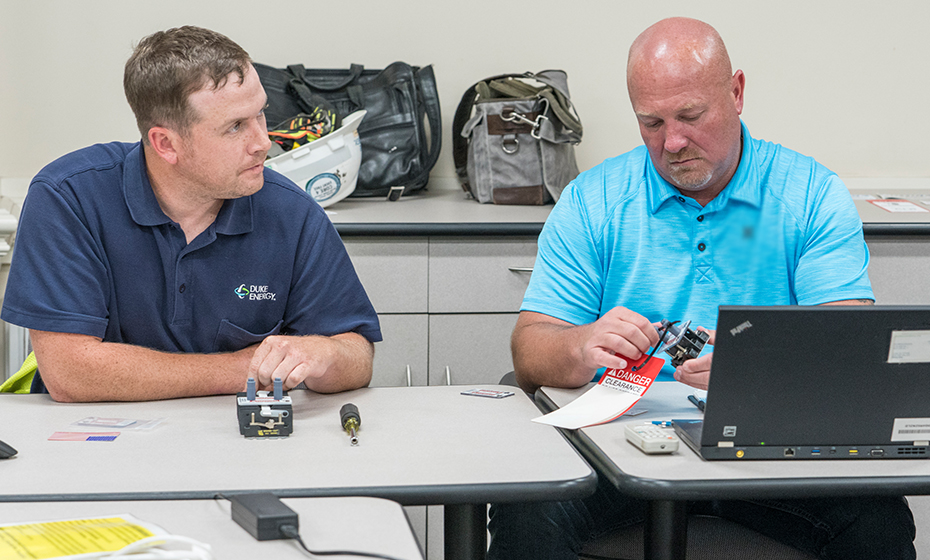 Brandon Garrison and his former manager Brent Dueitt inspecting a prototype of the invention.

He and Garrison came up with the idea for a slidelink cover, a device the size of a business card that could help prevent electrocutions during the lockout-tagout safety procedure.

They contacted Duke Energy’s Emerging Technology department to see if they could make the idea a reality. The answer was yes, and the company started the process to patent the device. Freeman has retired, but with help from Emerging Technology and Legal, they are in the process of commercializing the invention and are waiting to see if the patent office will grant the patent.

Inspired by this experience and an increase in employee idea submissions, the Emerging Technology team sought to streamline the existing process by gathering representatives from several departments to form an Intellectual Property Committee that could bring employee ideas to life.

Since the committee began in late 2017, employees have suggested ideas related to traditional utility responsibilities like pole repair and training to disaster response solutions for first responders. After an employee contacts the committee, the committee will helps determine the best strategy for the invention. For the slidelink cover, it was seeking a patent, but the committee can also help with other ways to protect and potentially commercialize inventions like trademarks, copyrights and contract protection.

​According to Duke Energy Director of Technology Development David Julius, the slidelink cover is the closest a Duke Energy employee invention has come to commercialization. The next step for the cover would be producing a small batch of 2,500 to 10,000 for testing before mass production. 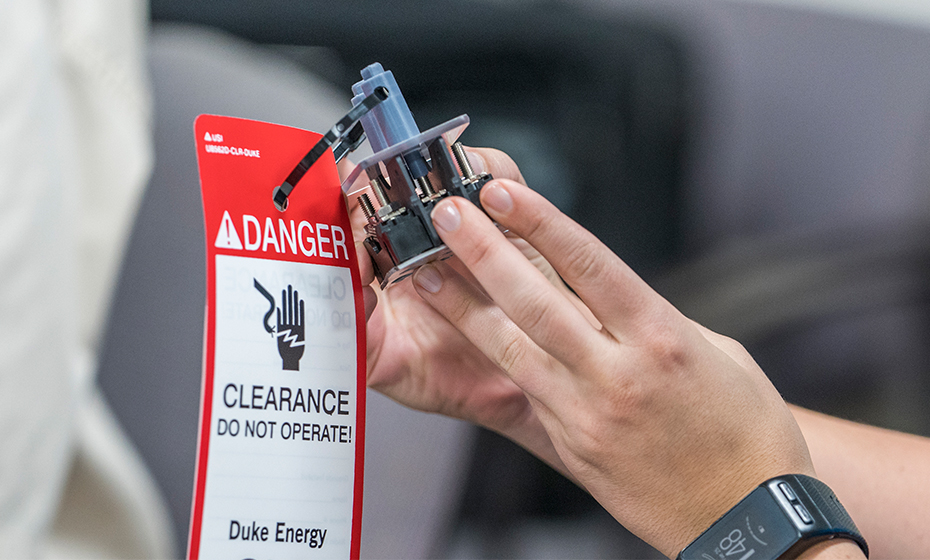 The lockout-tagout process is designed to reduce the likelihood that equipment will be accidentally re-energized while another employee is working on it.

Here’s how the lockout-tagout procedure currently works in many industries, and at Duke Energy: An employee de-energizes a piece of equipment and hangs a red tag on a breaker-like device called a slidelink. The tag is meant to prevent other employees from re-energizing the equipment and potentially electrocuting the employee who is working on the equipment.

The problem, which Freeman and Garrison wanted to solve, is that an employee could easily move the tag and unintentionally re-energize the equipment. Freeman’s idea was to create a cover that screws on the slidelink, so it’s impossible to access the part that re-energizes equipment without unscrewing the cover.

“It could help a lot of people work safer,” Garrison said. “This is a man or woman’s life on the line. You don’t want to wait until someone’s really hurt to do something about it.” 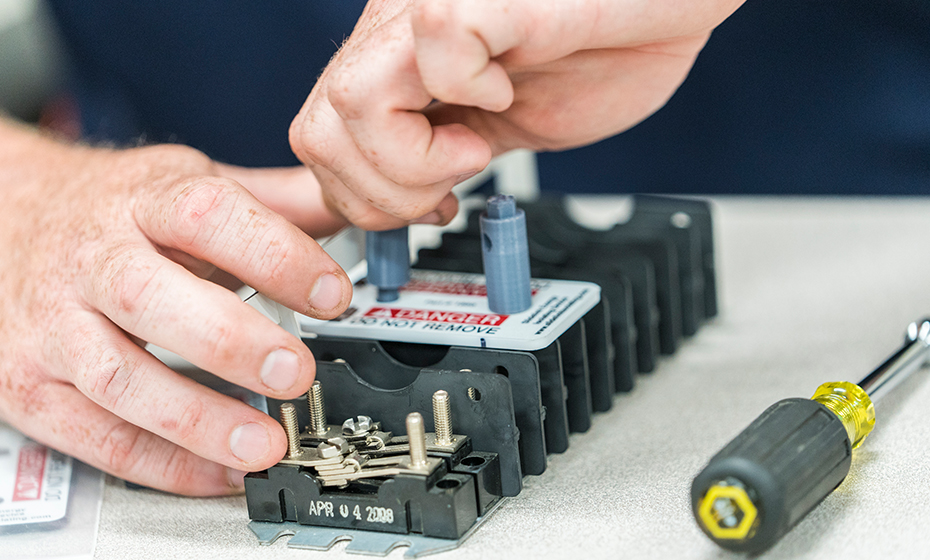 Instead of just looping a caution tag around the breaker, this invention secures the tag with a zip-tie hooked through a screw-on cover that eliminates access to re-energize the breaker.

A prototype of the cover is about the size of a business card but thicker and made of shatterproof polycarbonate – the same material used in bulletproof windows – and its bright-red text can be read from 8 feet away per Occupational Safety and Health Administration requirements.

Garrison said it’s easy to use, too. The cover slides over the de-energized slidelink’s positive and negative terminals and is screwed in place with two plastic posts. Then, a zip tie goes through both posts and the lockout-tagout tag hangs from the zip tie.

“Before, we were trying to meet the intent of the safety procedure with the tools that we had,” Garrison said, “and now with this device, we can.”

The team is still testing the prototype and will work with the manufacturer before the device is produced and marketed. Freeman and Garrison’s former manager Brent Dueitt said he’s proud to see the idea move forward and hopes it will inspire more employees to share their ideas.

“We need to encourage our employees to share more of these ideas. These are the people who know where we can improve things,” Dueitt said. “They’re solving our problems.”