Katrin Michael and Ann Warren have an unusual connection. A first-of-its-kind legal case brought them together in 2007, and now they are lifelong friends.

Their friendship started in Washington, D.C., when Warren joined the pro bono legal team trying to get Michael a visa after she testified against a foreign dictator on behalf of the U.S. government. 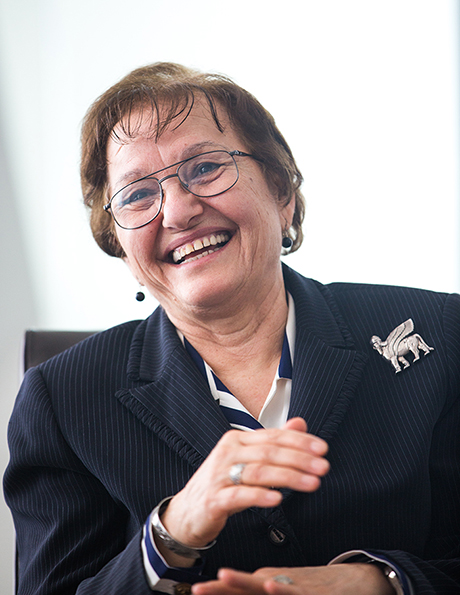 Katrin Michael is happy to finally be a United States citizen, so she can live safely and advocate for Christian and minority rights in Iraq.

On Sept. 11, 2006, Michael walked into the Supreme Iraqi Criminal Tribunal in Baghdad to testify against Hussein. She didn’t know if she would see him, but she was glad she did.

“I didn’t know it was going to be set up this way, but my chair was higher than his chair,” Michael said. “When I sat on that chair as a victim, now I am higher. He is sitting lower – the biggest dictator at that time – and that gave me very much power that I am in the right place. I thought, ‘This is my moment.’”

It was her moment to tell the details of Iraq’s 1987 poison-gas attack against Iraqi citizens living in a predominantly Kurdish region in a northern Iraq city during the Iran-Iraq War. Hussein’s planes released toxic fumes that may have included mustard gas, cyanide and other chemicals. Michael was able to escape.

Many victims, including Michael, fled higher into the mountains hoping they would find clean air. They had no food, water or warm clothes, and they were blind or nearly blind by the time they reached their stopping point. Michael was blind for three days, lost all of her hair and had blisters under her skin. She still suffers from nerve damage, trembling hands, joint pain and difficulty breathing.

“When you are persecuted, you will never forget,” Michael said. “It was the dream of my lifetime to testify against him.”

Her legal team at Foley and Lardner decided to try to get a U Visa, which is usually granted by the government for testimony against criminals, so she could legally stay in the U.S. While working on the case, Warren, who is now Duke Energy associate general counsel, and Michael became friends over visits to each other’s homes, swimming and cooking for each other.

“It’s been such a privilege for me to work with her and get to know her,” Warren said in an article in The North Carolina State Bar Journal. “My pro bono work for Dr. Michael … has been incredibly rewarding because she can now advocate for freedoms for Iraqis while living safely in the United States.”

Warren is heavily involved in pro bono work in Charlotte as co-chair of the Pro Bono and Resource Development Committee of the North Carolina Equal Access to Justice Commission. She is also the 2017-2018 co-chair of the Mecklenburg County Bar’s Charlotte Legal Diversity Clerkship Program.

After joining Duke Energy in 2010, Warren continued to help Michael obtain a green card and, in 2015, U.S. citizenship.

“If there were a word for me to express what Ann means to me, I think the dictionary missed that word,” Michael said. “Ann was like a mother, sister, friend, comrade and more.”

After escaping Iraq, Michael made her way to the United States. Although she has a doctorate in geology and mineralogy and a background in petroleum engineering, she was unable to accept jobs because of her refugee status. It took 17 years for Michael to become a U.S. citizen.

“If I didn’t take her case, I didn’t know who would or if there would be a lawyer to take her case,” Warren said. “Hers is such a worthy case, and I wanted to make sure she got the best representation.” 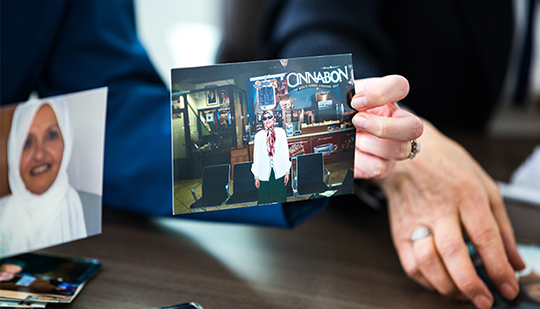 Katrin Michael shows how she had to travel in disguise to testify against Saddam Hussein in Iraq.

Michael inherited her political activism from her father, Ilyas Michael, a Christian political activist and co-founder of the Iraqi peace movement in the early 1960s. He was well-known, which made her family a target for Hussein’s Sunni Muslim regime. Every member of her immediate family was arrested at least once. Michael was arrested for the first time when she was 14 years old and interrogated about her father’s whereabouts.

There was a period when she and her siblings weren’t allowed to go anywhere except school – they weren’t even allowed to stand in front of the door.

“My mom was always like an umbrella over us keeping us safe,” Michael said.

After the attacks on her family and small Christian village in 1963, she joined her father and brothers in the Kurdish guerilla group Peshmerga, which means “those who face death.” She was 13.

“We were suffering a lot,” Michael said. “We needed to do something to get rid of that dictatorship.”

There aren’t many women in Peshmerga – Michael estimates no more than 50 during her time in the Iran-Iraq War – and most didn’t serve more than one year. Michael served seven. Because she was highly educated and spoke several languages, she traveled throughout villages encouraging women not to send their children to join the Iraqi army.

Her future with freedom

After fleeing Iraq in 1988, Michael lived in several countries including Turkey, Syria, Algeria, Bulgaria, Russia and Romania, where she was threatened for being a Christian or woman and tracked by Hussein’s police. She eventually received a temporary residence permit in Greece but lost it after three years when she came to the United States to visit a sick relative. 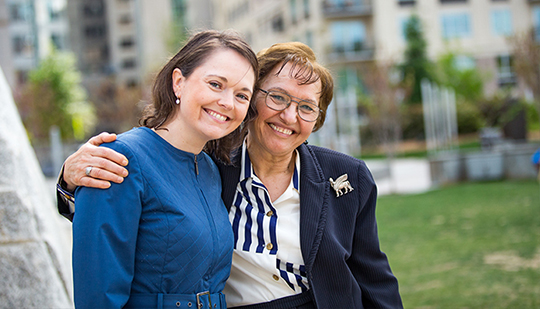 Although Michael missed out on many job opportunities before gaining citizenship, she’s now able to accept invitations to conferences and speaking engagements throughout the world to tell her story. She lives in Detroit, Mich., and continues to advocate for women, Christians and minorities in Iraq by lobbying and writing articles against terrorism.