The first time Susan Gardner’s music class at Holly Tree Elementary School in Wilmington, N.C., hears a recording of a tuba, one young student usually says: “That sounds like a burp!”

And then the whole class giggles.

Gardner, a flutist and music teacher, coaches them not to mention burps when they’re at the concert the North Carolina Symphony will perform for fourth-graders in their New Hanover County school district. (Each year, the symphony performs for more than 52,000 fourth- and fifth-graders across the state.)

Preparing them for what they’ll experience is important. The symphony has produced resources for students and teachers: A colorful booklet introduces them to composers from Beethoven to Woody Guthrie – proving the definition of “classical” music is as broad as the Old North State.

Gardner has been teaching music in Wilmington for 17 years. And that’s how long she’s been going to teacher workshops the North Carolina Symphony leads.

The orchestra has presented its Music Discovery preschool programs in towns as small as Wallace (at Lynda’s Play and Learn, Too), Faison (at Hargrove Elementary) and Aberdeen (at Aberdeen Primary School). “Ensembles in the Schools” has been to elementary schools from Havelock to Vass. They’ve played cafeterias, gymnasiums, libraries, homeless shelters. 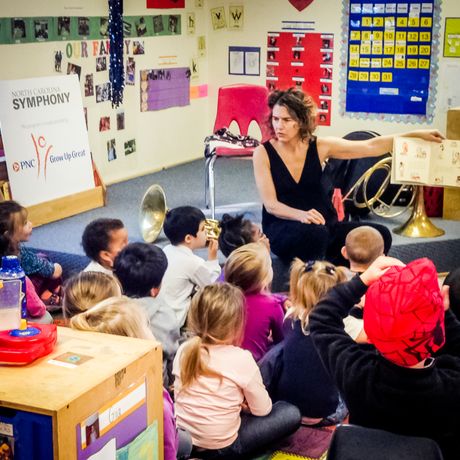 Sometimes the children who hear these concerts grow up to be musicians themselves.

One of them is Caroline Shaw, a Pulitzer Prize-winning composer who grew up in Greenville, N.C. “I'll never forget being one of hundreds of third-graders in the gym,” she said, “learning about the instruments of the orchestra and wondering what it must be like to play such thrilling music.”

Last season, the orchestra co-commissioned a piece by Shaw. They’ll perform it at The Kennedy Center in Washington, D.C., in March.

Shaw is probably the exception and not the rule. No matter, Gardner said. She tells her students that even if they don’t all grow up to be musicians, they can all be arts supporters. “The audience is essential,” she tells them: “‘It would be silly for a symphony to perform to an empty auditorium,’ I tell them. We talk about how important it is to support the symphony by buying a ticket or making a donation.”

Although the North Carolina Symphony is based in Raleigh, the entire state is its home turf.

That’s how it was intended. Back in 1943, the N.C. legislature passed “The Horn Tootin’ Bill” (SB482), which gave public money to the symphony and stipulated that education should always be part of its mission. “We have a well-known folk tradition in the state,” Gardner said. “Back in the ’40s, the state legislature decided we needed to enhance that with lessons on classical music.”

This traveling symphony concept doesn’t happen everywhere. “When I tell my teacher friends in other states about our symphony traveling to schools all over North Carolina,” Gardner said, “they say, ‘Wait; they do what?’”

The musicians make a concerted effort (pun intended) to go to small towns – where people may not get to hear a live symphony very often. 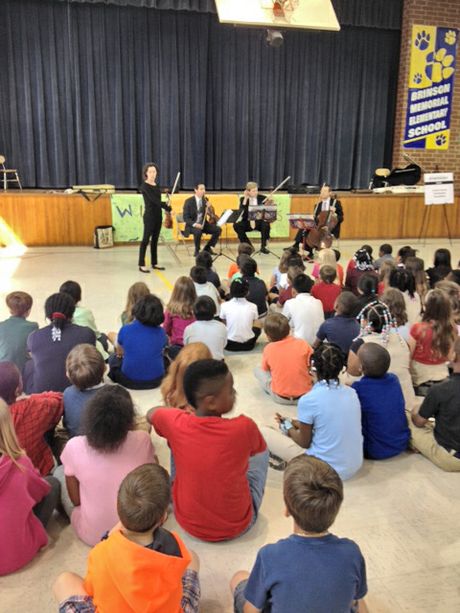 The orchestra has traveled from the coast to the mountains and has played in cities with skyscrapers and their own symphony orchestras and in unincorporated towns that don’t even have a stoplight. Back in the day – before the state had highways that made travel easier – they were dubbed “The Suitcase Symphony” because of how often they were on the road. A trip from Raleigh to Charlotte in the 1940s had to be an overnighter. It took that long to go from point A to point B.

Travel is easier nowadays, but the orchestra is still on the road a lot. In a typical year, the musicians might perform 40 or more education concerts.

Although they’re still partially funded by taxpayers, it takes more than state funding to keep the show on the road. This year, the Duke Energy Foundation awarded a $175,000 grant to the symphony for education and outreach, particularly in rural areas and areas with limited access to the arts.

“Our partnership with the North Carolina Symphony enables us to cultivate the next generation of arts custodians through immersive musical experiences,” said the Foundation’s Amy Strecker. “Quality arts programming is key to our state’s vitality and appeal as a place to call home.”

It all starts with educating youngsters – as early as preschool – about the instruments that make up an orchestra … how they sound alone and how magical they sound together. Macdonald has heard the gasps when the double bass plays its first deep note.

She’s also heard the giggles when kids hear – you know where this is going – the tuba. 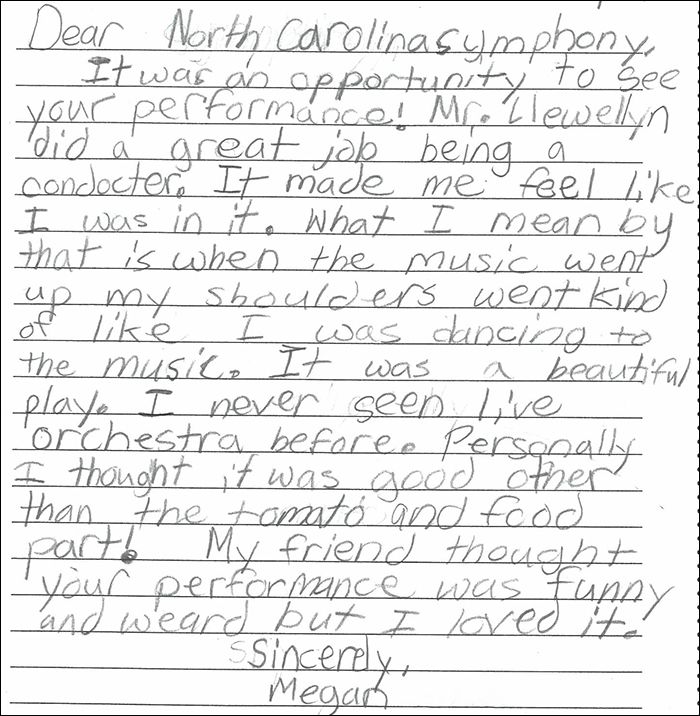 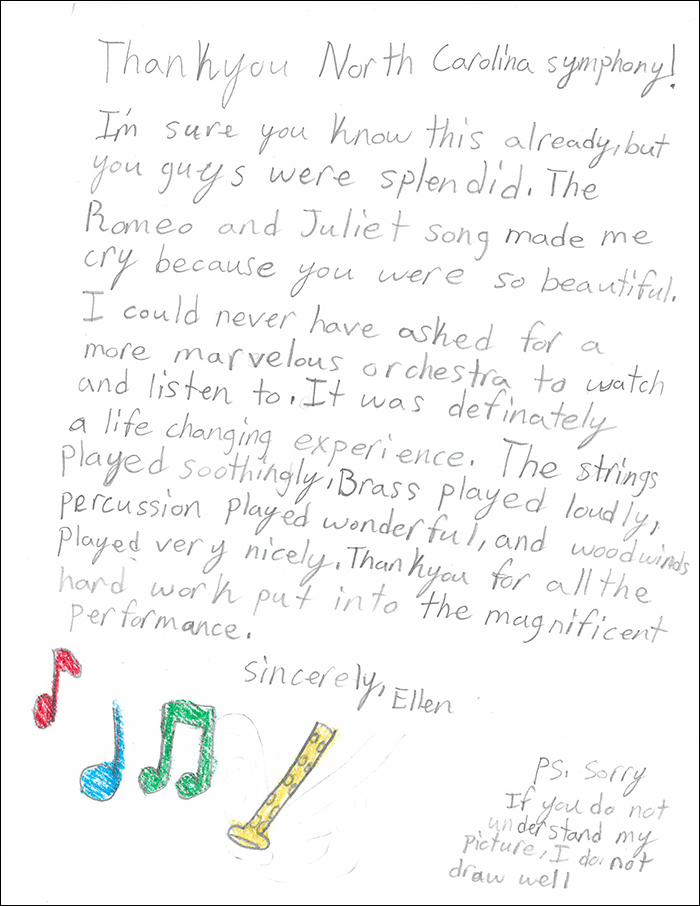 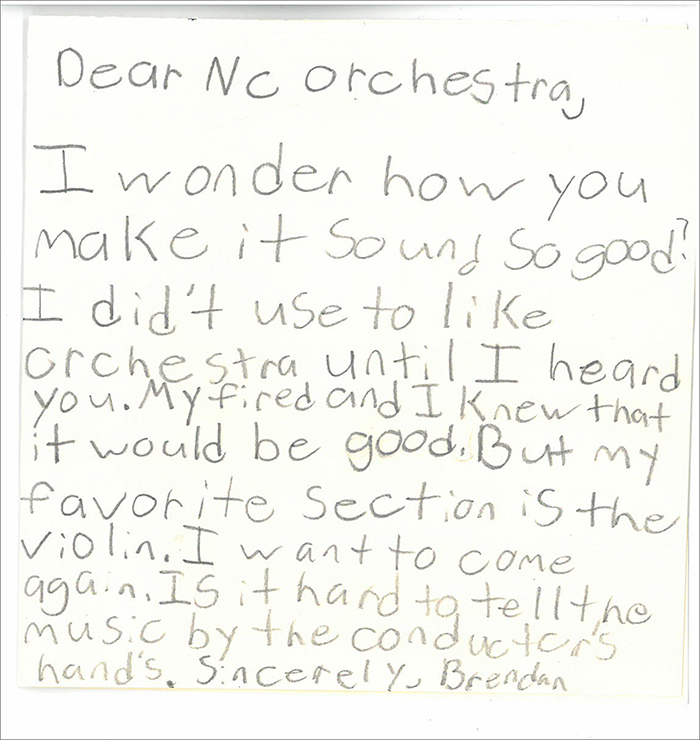