I recently led some Boy Scouts on a high-adventure trip to the Boundary Waters Canoe Area Wilderness. This breathtaking scenic area is located between Minnesota and Ontario, Canada. 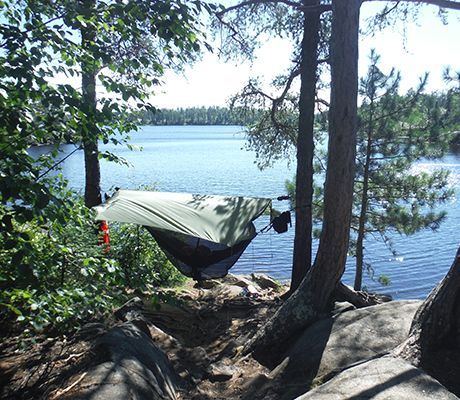 The hammock offers a peaceful view of Lake Insula on a calm day.

We had a great time canoeing, fishing, camping and enjoying being off the grid for a week. However, being isolated in the backcountry also means no access to phone, internet, radio or any type of severe-weather warning system.

Midway through the trip, I was awakened early by another adult leader who had been lying in his hammock watching a thunderstorm build in the distance. “I think a bad storm is coming, and it’s coming fast,” he said.

We woke the boys and together began securing essential items like paddles and lifejackets and tying down canoes. As the storm neared, wind speeds increased dramatically. Thankfully, we had a place to shelter – a low rock wall with a slight overhang.

"After our frightful experience, I was amazed to hear several campers talk about how they stayed in their tents during the storm. They relied on luck.”

We huddled in place for what seemed an eternity as rain came in sheets, lightning streaked and trees snapped around our campsite. Finally, the storm passed. We were all OK.

A large uprooted tree fell just 10 feet from where the boys had evacuated their tent. Other campers were not as fortunate. We learned that a 13-year-old Boy Scout from Texas and an adult leader were killed by falling trees. There were others who had been injured and had to be flown by helicopter to receive treatment. Rangers working for Lake Superior National Forest told us we experienced the most damaging storm they had witnessed in the area since 1999.

We survived my worst fear. Prior to our arrival, I had read news reports of a father and son who were camping in the same region over Father’s Day weekend when a storm struck suddenly at night. They were unable to get to safety; the father was killed by a falling tree. 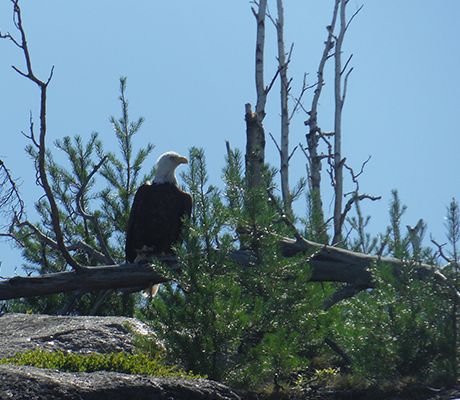 Bald eagles can be seen in the Boundary Waters Canoe Area Wilderness.

Before our excursion, our crew discussed how we would deal with severe weather situations. We understood that the highest-priority hazards associated with a storm in the Boundary Waters Canoe Area Wilderness are falling trees due to high winds and lightning. Other backcountry trips may present specific hazards due to location, time of year or other factors.

After the storm, we viewed each potential campsite differently, with shelter availability as the primary focus.

I was amazed to hear several campers talk about how they stayed in their tents during the storm. They relied on luck, as tents provide no protection from falling trees.

Injuries due to severe weather are not limited to backcountry excursions. Each year, we hear news reports of camping injuries and even deaths in our local area due to falling limbs or downed trees. Always use safe camping practices even if pitching a tent in a local campground or your backyard.

Joe Gorley is an engineer for Duke Energy in Cincinnati.

Before setting up your campsite, consider these safe practices: