Tyson Grim knows how to connect with a crowd. In concluding a May 23 speech to his fellow townsfolk, the Piedmont Natural Gas CEO for a day said, “We hope to earn your natural gas business. For those of you who are already our customers, we thank you.”

Earlier in the morning, he had expressed excitement about landing the CEO position he interviewed for. He felt he had the right stuff for the job. “I’m organized, and I like projects,” he said. “I like helping my dad around the house.” 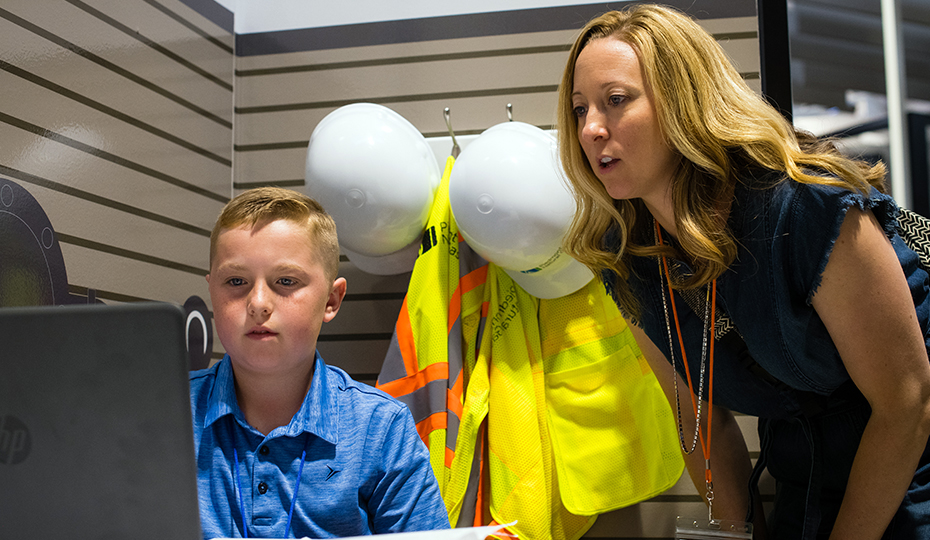 The fifth grader from Doby’s Bridge Elementary School in Fort Mill, S.C., was one of 82 students participating in JA BizTown, a simulated, life-size town with a town hall, banks, a newspaper, a grocery store and, of course, a power company. Junior Achievement of Central Carolinas has created the town at their Camp North End headquarters in Charlotte, N.C. More than 11,000 students – from public, private, charter and home schools – have been JA BizTown citizens for a day during the 2018-19 school year.

Tyson and three of his classmates reported to work at the Piedmont Natural Gas storefront, staffed on this day by parent volunteers from Doby’s Bridge, to get specifics on their roles. The chief financial officer would make sure expenses, including payroll, were paid and that money was left over. The marketing manager would design an ad campaign. The HR manager would ensure employees knew about their benefits. And Tyson Grim would discover what it’s like to be the head honcho. (Spoiler alert: It can be lonely at the top.)

"Piedmont Natural Gas is committed to enhancing educational opportunities, and we're grateful for organizations like Junior Achievement of Central Carolinas that provide real-life experiences that help prepare our students for the future,” said Barbara Ashford, director of community relations at Piedmont Natural Gas. “This isn't your typical classroom setting, and we hope participants are enriched and excited by their visit.” 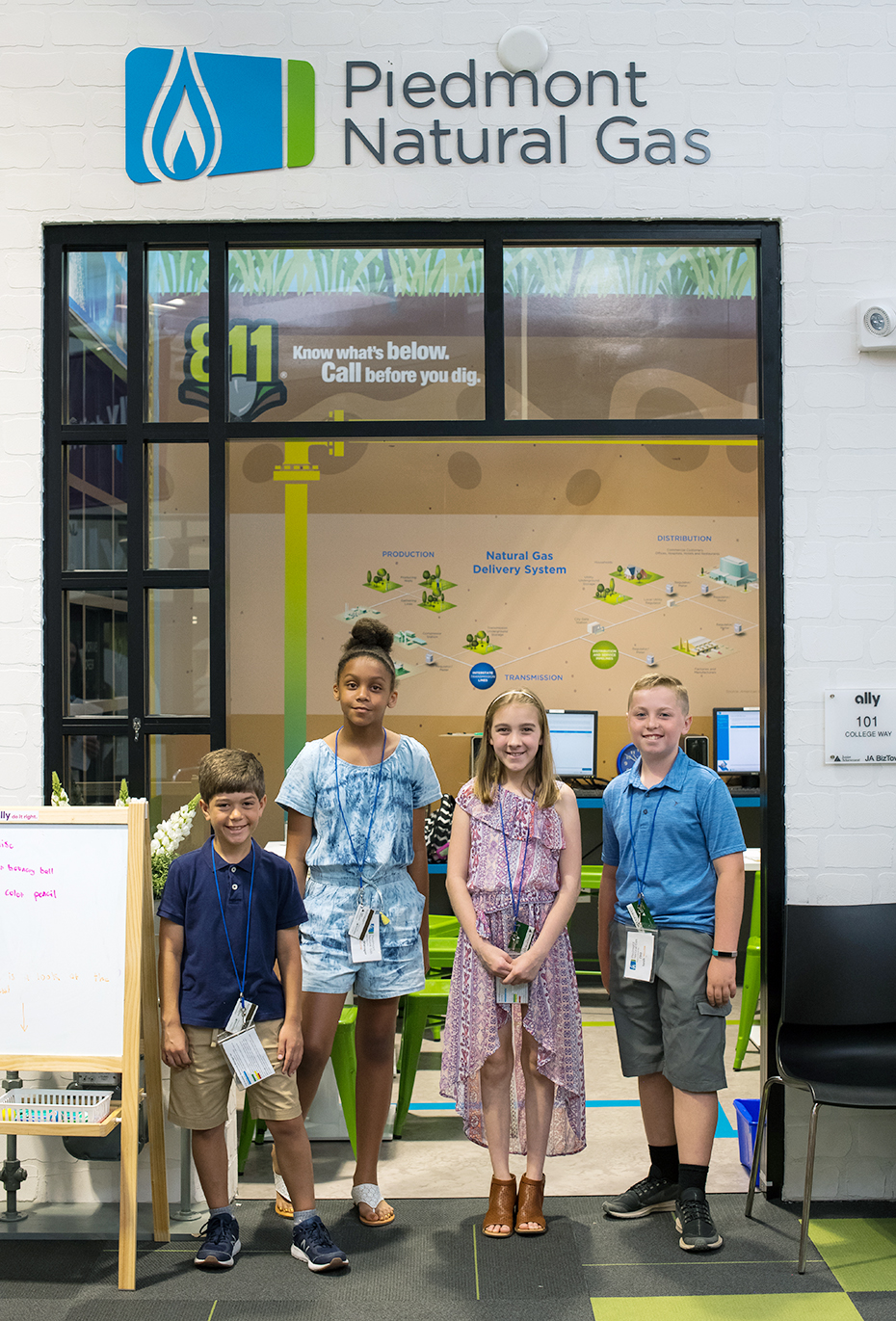 JA BizTown citizens learn all about how a city works.

Being a sponsor of JA BizTown is a natural fit for Piedmont Natural Gas and parent company Duke Energy, whose community focus areas are K-12 education, workforce development and nature. Junior Achievement also operates JA Finance Park for high schoolers. (Duke Energy has a storefront in that simulated town.)

In JA BizTown, fourth through sixth graders operate banks, manage restaurants and grocery stores, write checks, balance a budget and vote for mayor. They are citizens, workers and consumers and learn about money management and about the responsibility inherent in being a good citizen.

These are lessons that stick with kids. That’s because JA BizTown has what Junior Achievement CEO Sarah Cherne called “the wow factor.”

“Walt Disney knew what he was doing,” she said. “Adults can still remember their childhood trips to Walt Disney World because of the wow factor. It’s the same thing with JA BizTown. We hear from teachers all the time that the highlight of some students’ elementary school careers was the day they spent at BizTown. It’s life-changing.”

JA BizTown is not your typical sleepy small town. There’s an energy to it. JA BizTown has a radio station, and its employees get to choose the music that’s occasionally piped through the speaker system. Did the pace of commerce speed up just a bit when Lady Gaga’s “Edge of Glory” came on? It seemed to.

Cherne also hears from parents who say JA BizTown gave their child an understanding of what it takes to buy groceries, balance a checkbook, make smart financial decisions.

Every JA BizTown resident has a job. They all get a (fake) paycheck that’s deposited into their (fake) bank account. Taxes are taken out before the money hits their account, so they see that Uncle Sam gets his share. And they learn that some of the professions we value most – police officers, fire fighters, public school teachers – are paid through tax dollars. 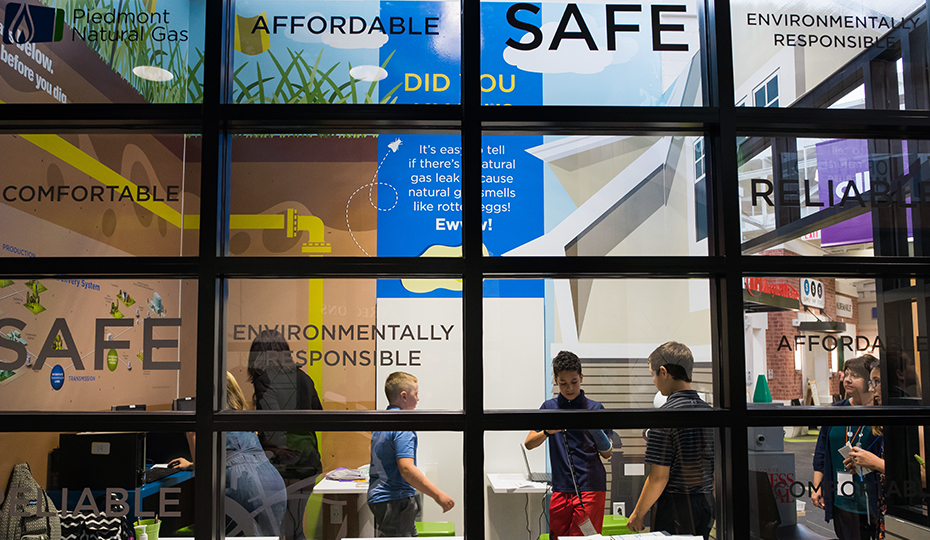 C-suite execs learn first-hand about competing priorities. At one point, Tyson Grim found himself the only employee in the office. (The CFO was at lunch and the marketing manager was on a shopping assignment.) Tyson needed to approve the webpage his marketing manager designed, sell his company’s products and apply for a business loan. “Figuring out what to do and in what order was probably the hardest thing” about being CEO, he said.

What CEO hasn’t struggled with the same?

Besides money-management skills, JA BizTown citizens learn soft skills as they go about their day. Being a reliable teammate at work, meeting deadlines, keeping promises, being respectful – all of it comes into play.

“This is a microcosm,” Cherne said. “It’s a miniature economic environment where students see what it’s like to be an adult. They apply and interview for jobs – and may not get their first choice. They work with their teammates. They pay bills.”

And they learn the importance of saying “thank you” to customers. As Tyson Grim discovered, the CEO may be at the top of the org chart, but his customers are his bosses.