For Milford High School engineering instructor Peter Leeper, it’s always good to talk science, but even better if students can get involved in a real-life project. 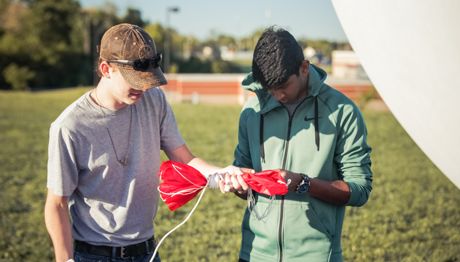 “In education we’re always interested in activities that the students can get fully engaged in. I could give them a worksheet or we can do a project that fully engages them in the work,” Leeper said. “We did a little bit of both.”

The senior-level aerospace study was the capstone course of a four-year curriculum aimed at generating interest in engineering at the school northeast of Cincinnati. Eight students who had been in the program since their freshmen years embraced the challenge of building and launching the weather balloon.

When Leeper noticed that Duke Energy had posted a grant opportunity on DonorsChoose.org, he posted his project. Leeper is also part of the area’s Great Oaks program, which prepares students for careers.

A business stepped up to donate $500, and Duke Energy matched the grant for a total of $1,000. With the money, the class was able to purchase a flight computer, balloon, parachute, GoPro camera to photograph the curvature of the Earth, and radio transmitter with GPS to send data back to Earth. The goal was to have the balloon ascend 100,000 feet into the stratosphere (the second of five layers that comprise the Earth’s atmosphere), collect altitude, temperature and pressure data, and collect the payload after the balloon burst.

It appears the project was worthy of an A. The balloon ventured for two-plus hours. Before it exploded, the payload reached 103,795 feet with a maximum speed of 128 mph, recording minus 34 degrees Fahrenheit and 0.12 pounds per square inch of pressure. The ruptured balloon was recovered in woods about 120 miles southeast of Lexington, Ky., which was about 160 miles from the launch point.

But the greater achievement was what the students learned. 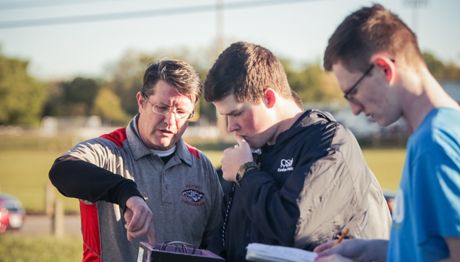 Drake Doran and Connor Hart each emphasized how the project provided a great management learning opportunity. Hart was in charge of making sure everything was up to regulation. Doran provided calculations such as how to fill the balloon and manage weight.

“I learned how to be more of a leader. I’m planning an apprenticeship to be an electrician. However, having projects like this certainly helps so I can learn how to do such a project by a deadline,” Doran said.

Evan Richards was responsible for the tracking systems, including flight transmitter. What did he learn? “In engineering we really will have to work together as a team in order to solve complex issues.”

DonorsChoose.org empowers public school teachers from across the country to request much-needed materials and experiences for their students. There are thousands of classroom requests that anyone can help make a reality by providing a gift of any amount. Corporations can double the impact by offering matching grants for specific areas of study such as STEM (science, technology, engineering, mathematics) subjects.

Walter Davis worked on the prediction subsystem, identifying where the balloon would tack, when it would burst, where it would land and how long it would take. Davis will be joining the Navy in October. “With what I’ll be doing and how I’ll be doing it, it’s going to be a really team-based effort. So it will be great to see how these skills can transfer over to a completely new field,” Davis said.

Allan Anbalagan was on the flight computer team and tying the balloon to the payload. He also talked about integration and the need to work together. “It was kind of complicated because we never worked as a big team in engineering over the past four years. Everyone had to work together and had to be very cohesive,” he said. “So we had to organize our roles and projects well.” 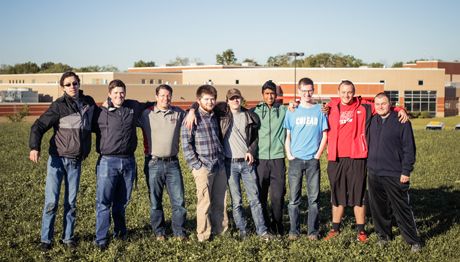 William Ayers summed up the experience for everyone. “It really gets your blood pumping. That was super fun. Definitely the coolest thing I’ve done in high school.”

“Mr. Leeper and the students should be proud of what they accomplished,” said Warren Walker, Duke Energy community relations manager. “As the students prepare for college and their futures, this project will serve to remind them of what can be achieved when a group of people commit to a common goal.”

A helium weather balloon can reach the upper stratosphere and expand five times its original diameter. As the balloon ascends, the surrounding atmospheric pressure decreases. The reduced pressure causes the balloon to expand, and once reaching a critical height level, will burst, at which point the payload falls back to Earth under a parachute. Weather balloons are integral to meteorologists in monitoring daily upper atmospheric conditions.