When electricity finally began lighting up small towns and rural communities back in the 1930s, it was an adjustment for some families frightened or confused by the unfamiliar lines snaking into their homes and the newfangled appliances that power companies marketed.

Residents of cities had enjoyed electricity for years. But most of their rural counterparts had remained in the dark – cooking with wood, hauling water from springs or pumps and reading at night by the light of kerosene lamps. 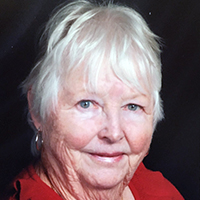 Power companies maintained it was too expensive to run lines across rural America, leaving nine out of 10 farms without electricity. Then President Franklin Roosevelt campaigned for rural electrification as part of his New Deal program, and the lights began to turn on.

As a member of Duke Power’s Home Service Department, her mission was to teach families accustomed to cooking over wood stoves how to cook on electric stoves. She helped them make the switch from ice boxes – literally tin boxes with blocks of ice inside – to electric refrigerators. She taught them how to use clothes dryers. Just as importantly, she helped alleviate their concerns.

Gray and the other women who staffed the department and similar ones at other utilities helped usher rural America into the modern era. 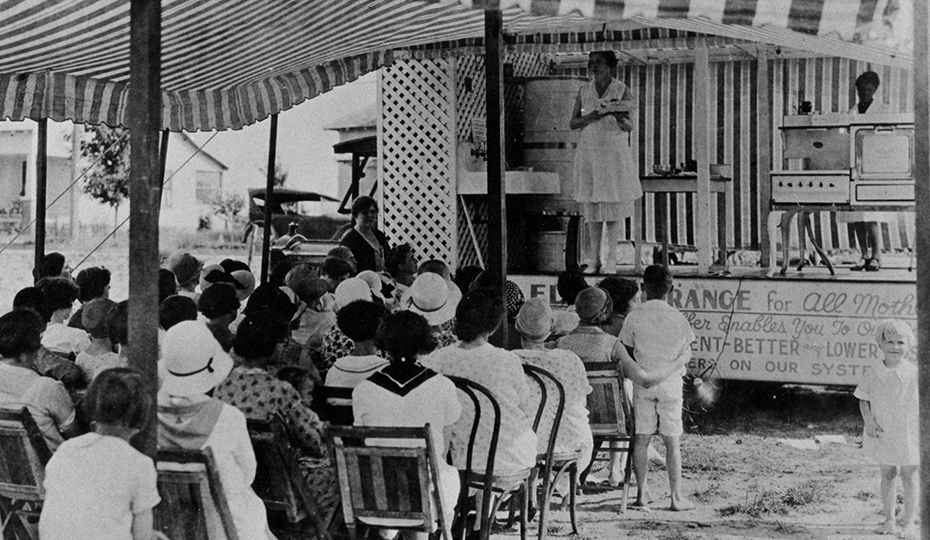 “The power lines literally connected us with electricity but also culturally connected us,” said Tom Hanchett, historian-in-residence at the Charlotte Mecklenburg Library. “Having radio, and later television, having lights that gave you the power to set your schedule, all of those things created a shared American experience in a very short period of time.

“All of a sudden, you’re not playing old fiddle tunes that your grandfather played but you’re listening to Elvis Presley on the radio or maybe a band called the Beatles in London. Local cultures, once so distinctive in the South, got swirled up in national culture. We gained something and we lost something.”

“It was a big deal to get electricity,” said Gray, who worked in the Home Service Department office in Spartanburg from 1959 until 1964. “One thing we did stress was safety, saying you need to be in the house when you’re cooking to make sure you don’t burn the house down with a pot left on the stove.” 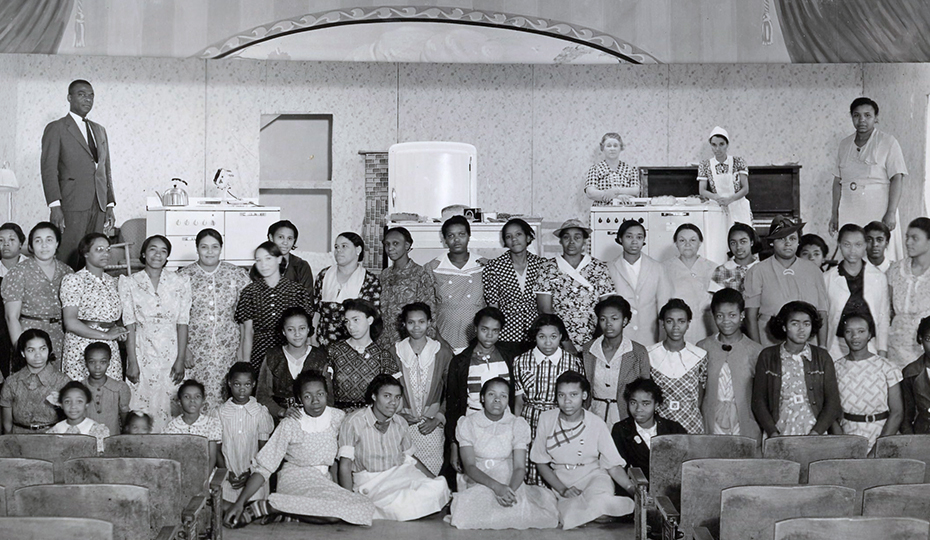 With each new stove that salesmen sold, Gray followed up with a home visit. She gave each family a package of dishcloths and a shiny new baking sheet. “I would tell them not to cook on that old black-looking pan in their kitchen,” she said. “And then they wanted to know why the biscuits didn’t get brown on the bottom.”

Sometimes, the learning curve was steep.

“A lot of people were scared of electricity,” said Chris Hamrick, archivist for Duke Energy. “They were especially concerned that it might cause a fire. The women in the Home Service Department would go out into the communities and help them feel comfortable.”

“Cooking by wire,” they called it.

Gray, who is now 82, got the job after graduating with a degree in home economics from Winthrop College (now Winthrop University) in Rock Hill, S.C. 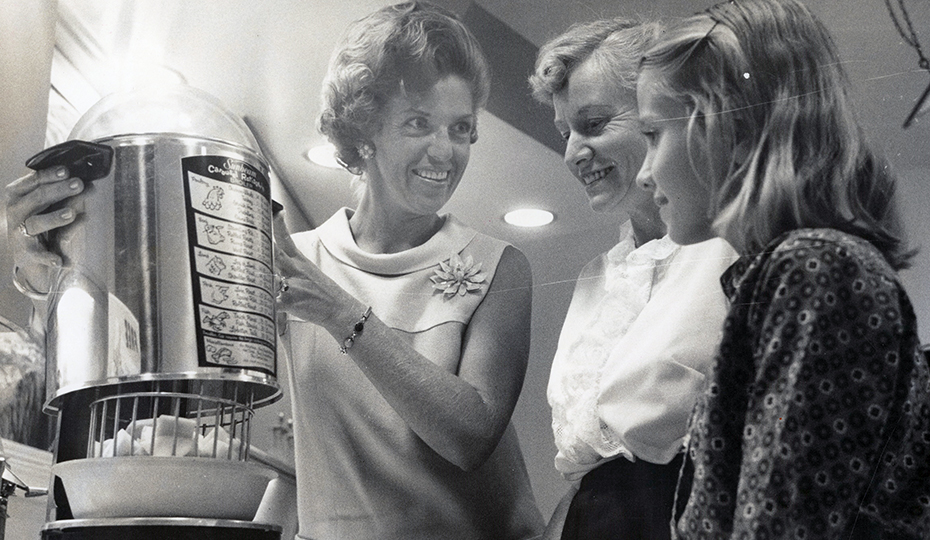 “In the 1950s, if you were a woman, you either taught school or you were a librarian or you were a secretary,” she said. “There were no home economic jobs available when I graduated. So when Duke Power came to career day, I talked to them about the Home Service Department and figured that was something I could do.”

As a child, she had learned how to build a fire in a wood stove and bake biscuits, fry ham and cook just about anything else that needed cooking. She could identify with her customers and help them make the switch to electric. There was one secret, however, that she kept to herself: She didn’t like to cook. She still doesn’t.

She said she earned about $300 a month and drove a company car, visiting homes as well as hosting demonstrations at community gatherings and at 4H camps.

“A lot of small appliances were coming out about that time, like blenders and electric frying pans,” Gray said. “I would haul all those appliances out and I would cook something in the different ones and then they would all sample what I cooked. I would fluff up eggs in the blender, then scramble them in the frying pan. In the mixer, I can remember making some kind of strawberry fluff stuff, with egg whites and frozen strawberries, and then scooping it out and putting it on pound cake.”

Many of her customers worked in textile mills. When the mills signed up for electricity, Hamrick said, the owners cut a deal that the lines would also run to the mill houses. Hamrick said that was the beginning of Duke Energy’s residential services. 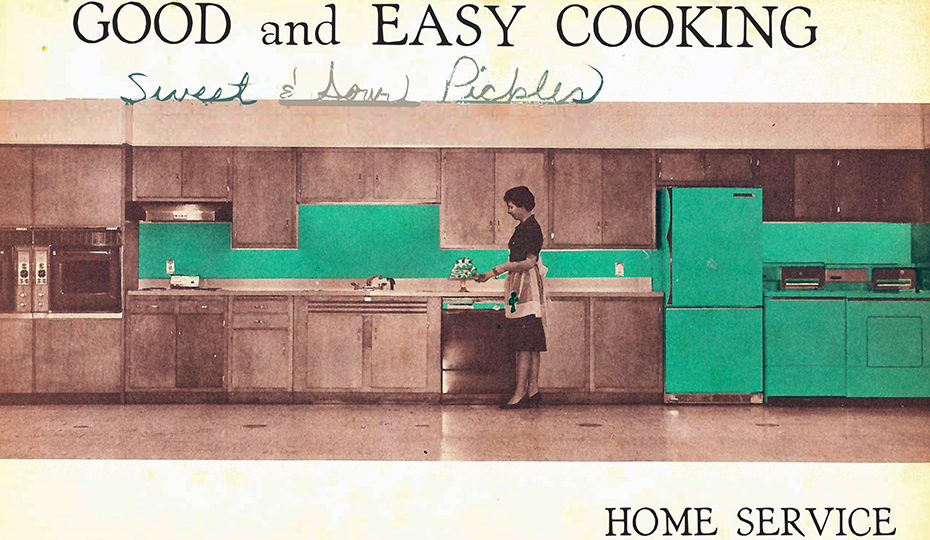 Each Christmas, the company presented residential customers with a recipe book. The cover of the 1961 edition features a photograph of Gray in the demonstration kitchen. She’s wearing high heels and an apron with Reddy Kilowatt on it. The “Good and Easy Cooking” pamphlet featured such recipes as Liverwurst Cream Cheese Spread, Yankee Doodle Salad and “It’s Dreamy” Cranberry Pie.

“During that time, a lot of home demonstrators would go into our customer’s communities to share updated information from the company and to distribute those cookbooks,” Hamrick said. “They were published until the late 1990s and evolved from cookbooks to cookbooks and crafts to cookbook, crafts and energy efficiency tips.”

During the oil embargo of the early 1970s, he said, the company began pushing for more efficient use of appliances. “The home demonstrators would give tips and ideas on how to reduce energy use. Microwaves were coming into use and Crock-Pots. They were promoting those other appliances, other than the high-end items, that could use less energy.” 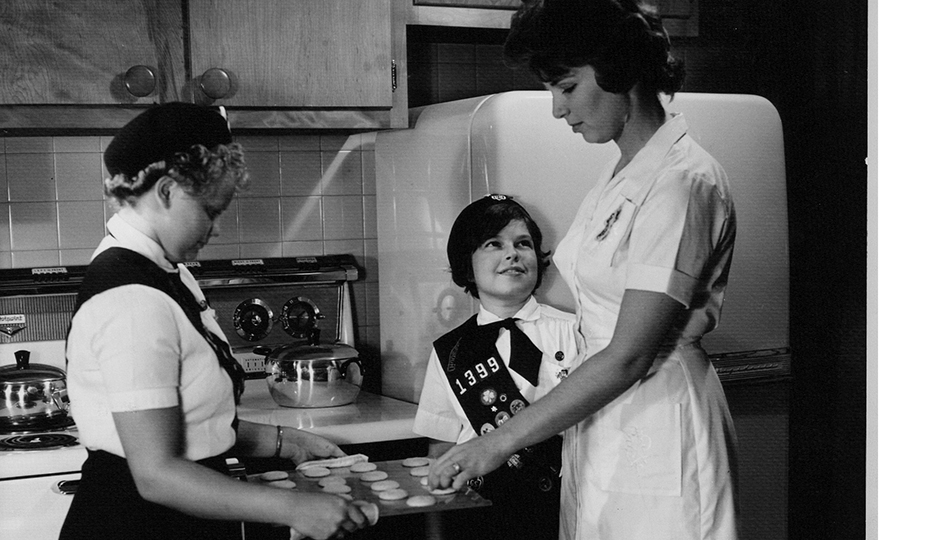 A Public Service Indiana Electric Living consultant with Girl Scouts in the 1950s.

By then, Gray had moved on. She fell in love with an electrical engineer named Bill Gray, who worked for Duke Power, and they married in 1962. Bill was transferred to Charlotte in 1964 but Tippy said she couldn’t get a transfer and so she quit. Bill retired about 30 years ago.

The Home Service Department was phased out in the 1980s, Hamrick said. But a reminder lives on at the Levine Museum of the New South. When Hanchett was pulling together the centerpiece exhibit, “From Cotton Fields to Skyscrapers,” he visited Duke Energy’s archives and spotted a Hotpoint electric range that women like Gray had used for cooking demonstrations. The range, like the exhibit, is on permanent display.

Duke Energy archivist Akeem Flavors praised Gray and her colleagues as “the face of the company.”

“There weren’t other employees whom the public interfaced with,” Flavors said. “They would come into your homes and your communities. That’s one of the coolest things about the job.”

While Duke Energy doesn’t have a home service department any more, the company still produces a holiday recipe collection and offers home products and services including energy efficiency checks, find a contractor and free and reduced-cost lighting. 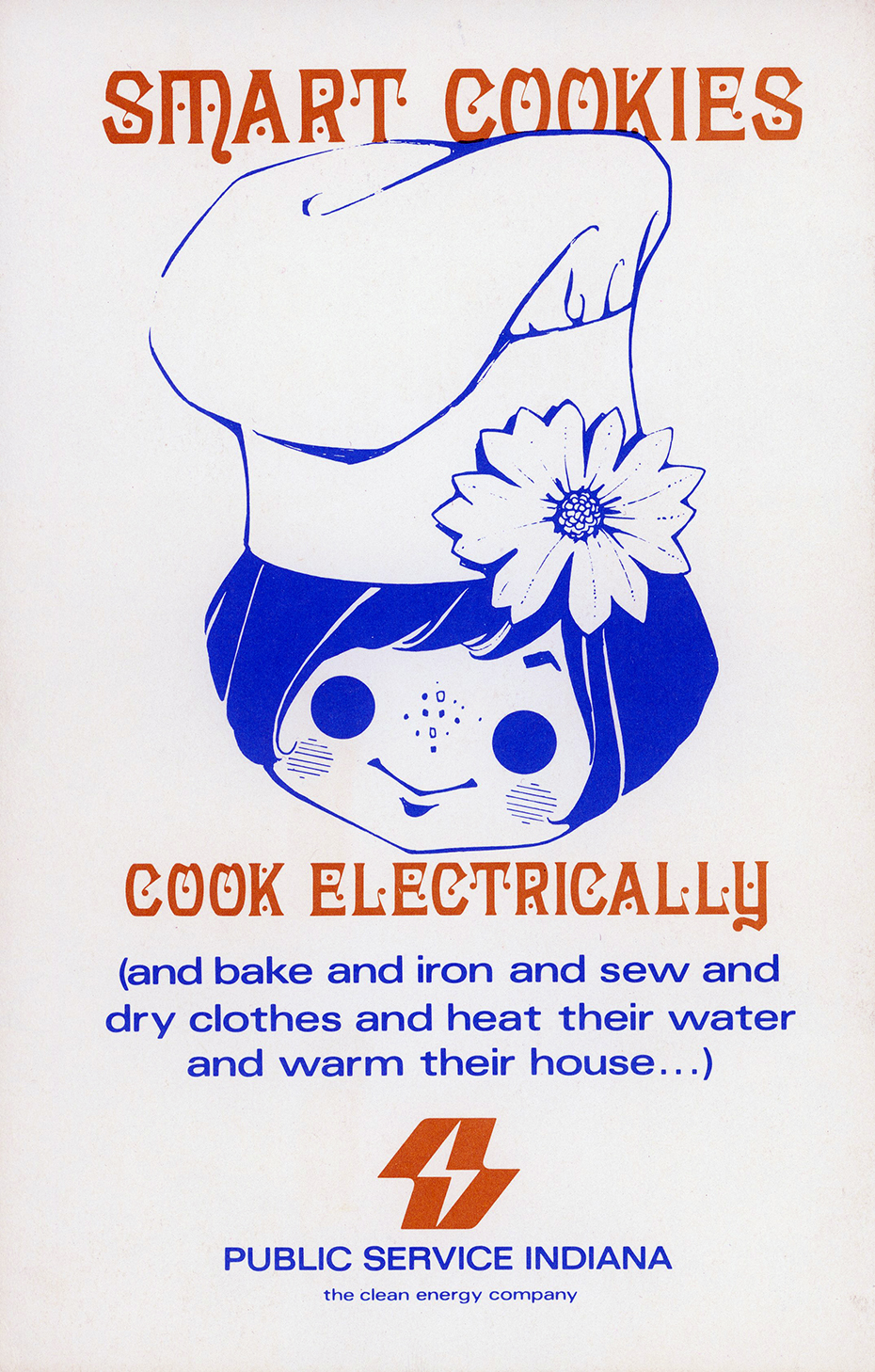 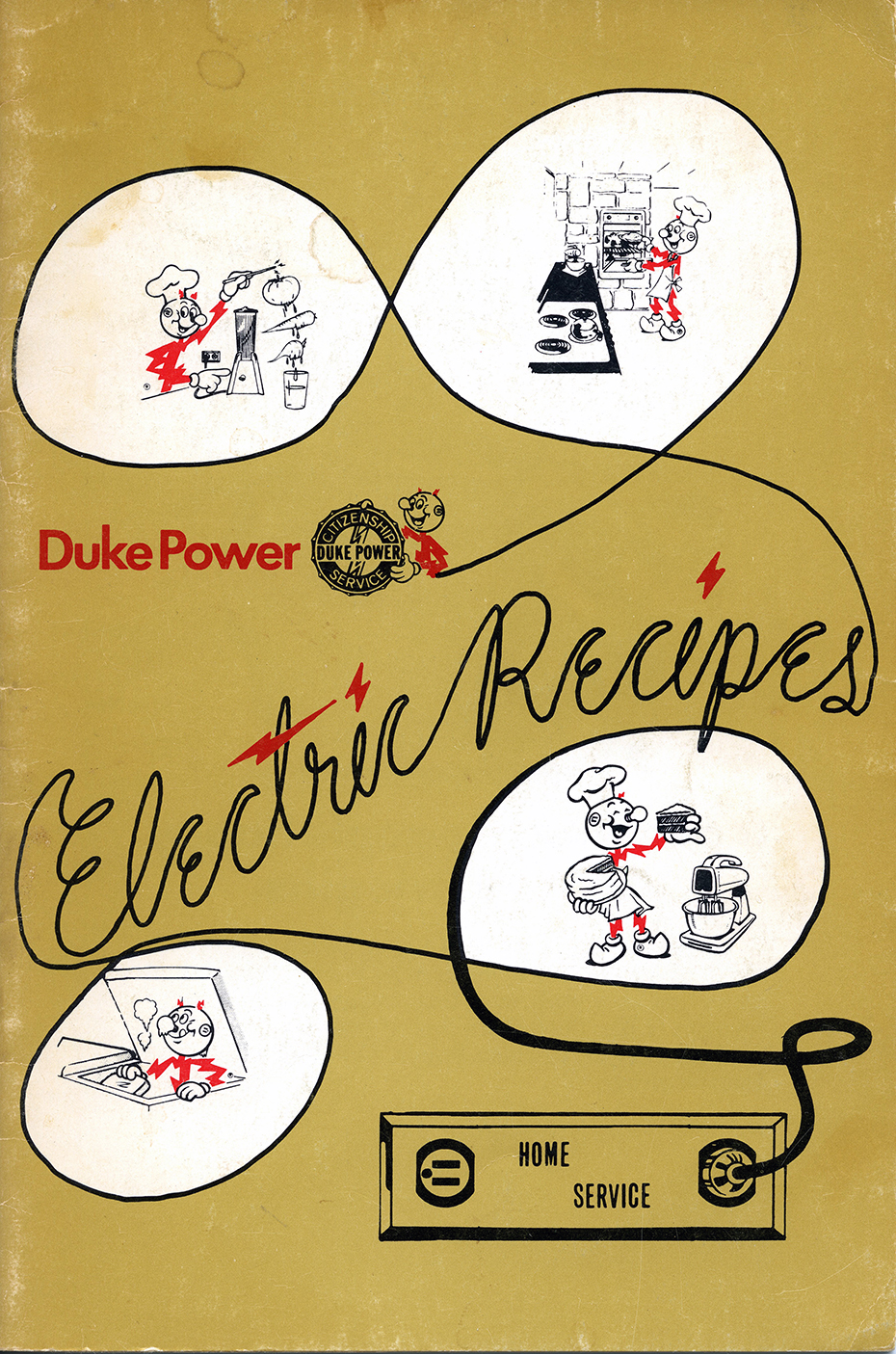 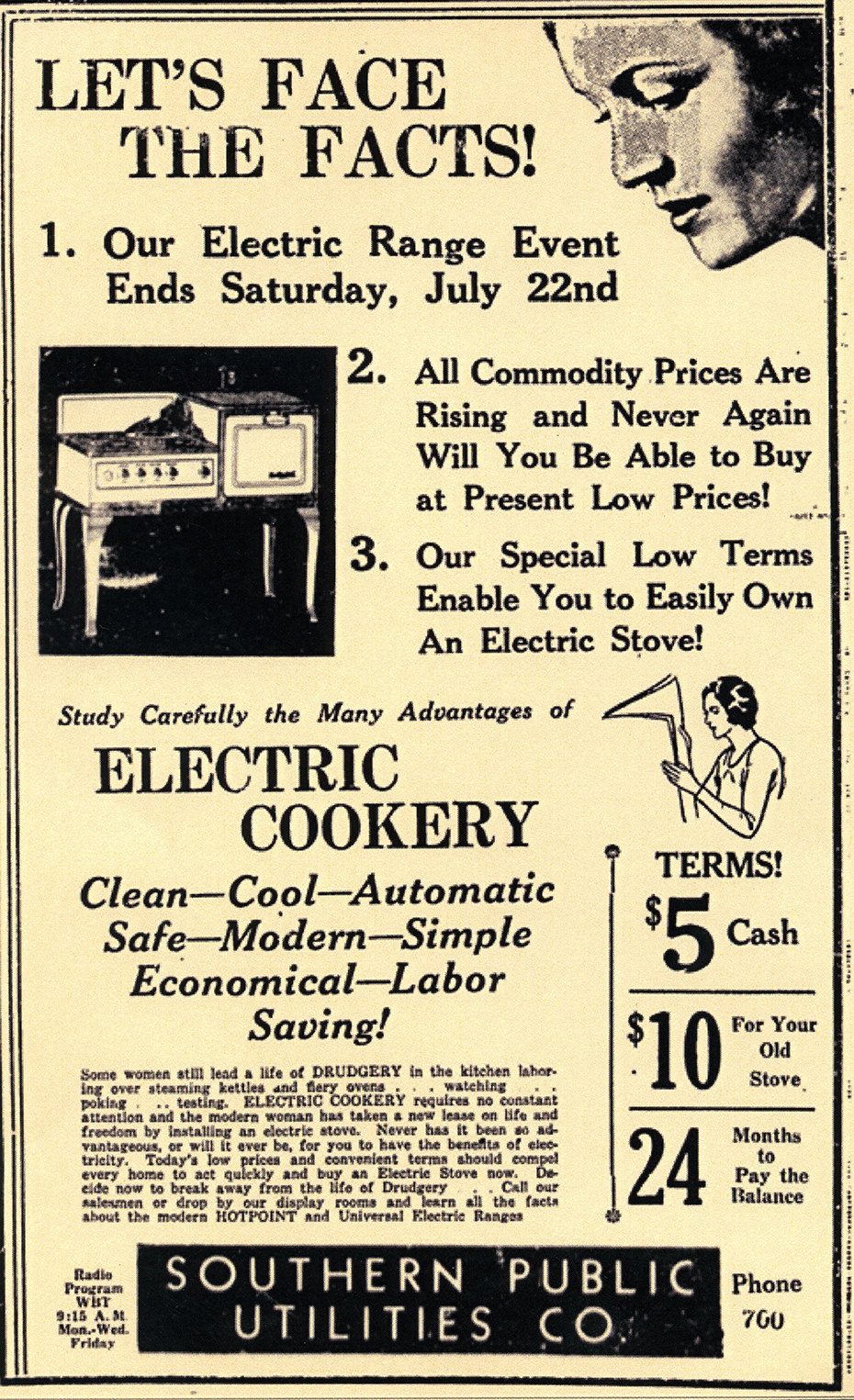