Richard Pierce found a job he loves, but he yearned to do more.

A self-described hyperkinetic, Pierce, working security at Catawba Nuclear Station in South Carolina, was used to juggling multiple commitments. When he worked as an officer for 15 years in the Clover Police Department in South Carolina, he also put in hours on the side cutting grass, working security and doing construction. His four children were young then, he said, and he needed the money.

After taking a job with Duke Energy in 2003, he was able to work just one job. But after eight years, he felt restless. “I know we take care of the community, protecting the reactor, but something was missing,” he said. “I was 42, and I wanted to keep accomplishing things.”

So the former U.S. Marine corporal – who served in combat during operations Desert Storm, Desert Shield and Sharp Edge – joined the Naval Reserve. He spent four of the past seven years deployed and, while on assignment, worked his way up from petty officer third class to the rank of chief petty officer. After tragic shootings in 2015 at two military installations in Chattanooga, Tenn., Pierce started an anti-terrorism program to protect the Navy Operational Support Center in Charlotte. 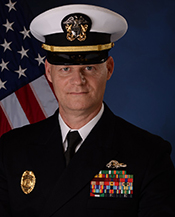 And on Oct. 5, he was commissioned as a limited duty officer in the Reserve, selected for a commission based on his technical skill and expertise in anti-terrorism and force protection. Limited duty officers come from the enlisted ranks and call themselves “Mustangs,” referring to wild horses that must be tamed.

“I’m living a dream I never dreamed of,” he said. “I never saw myself, first of all being in the Navy, then being a chief and then becoming an officer. I feel in awe.”

Pierce requested that his commissioning ceremony be held at Catawba Nuclear Station because of the support Duke Energy has shown since he became a reservist. “It’s not just me,” he said. “There’s a bunch of us who serve. I feel that so often we see fellow teammates leave the company for the reserves, and I don’t think it hits us that these guys are taking a bigger commitment to our country so we can all sleep at night.”

Three security workers were recently deployed in the reserves at the same time, said Neil Preston, manager for nuclear security operations. “Duke Energy has always been supportive,” Preston said. “They get deployed, and we adjust to it.”

Unless he is called up for special duty, Pierce expects to spend two days a month away on drills. In an interview in October from the Naval War College in Newport, R.I., he said that one of the most rewarding parts of his new position has been mentoring younger reserves. He said he shares with them values he learned at Duke Energy: “To have a questioning attitude and be a positive reinforcement. And the biggest thing is that safety is No. 1.”Pierce's favorite quote, spoken by former President Lyndon B. Johnson in 1968: “I never think of a Marine but what I think of a man who wants to do more, not less, a man you have to hold back, not shove."