Rick Jiran was 18 and fresh out of high school when he joined the Air Force in search of an adventure. What he didn’t count on was that adventure would be alongside man’s best friend.

Jiran, Duke Energy vice president for community relations in South Carolina, was a military working dog handler. And while stationed in Germany in 1980, Jiran and his German shepherd, Tork, helped protect the 52 Americans who had been held hostage in Iran.

Jiran’s story is one of many about the partnership between dog and handler protecting people. On March 13, National K9 Veterans Day, you can share your story or just thank a K9 veteran by using #NationalK9VeteransDay in social media posts. National K9 Veterans Day is celebrated on March 13 on the official birthday of the U.S. Army K9 Corps, which was formed in 1942. 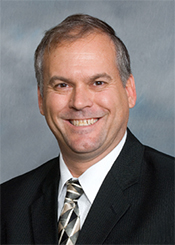 Jiran was a young airman in 1978 and training to be in the Air Force Security Police when he volunteered to be a military working dog handler. The term “working” is in there for a reason. They ensure the safety and security of personnel and installations.

“With a working dog, there’s a different story and different mission every day,” he said. “It’s law enforcement, so there is excitement that comes with that, whether with a patrol dog or a drug dog. But I really loved my time working with my bomb dog, Tork. When I joined the military at 18, I never imagined I’d be working with presidential and vice presidential Secret Service support.”

Patrol dog school introduced handlers to the art of working with a police dog – a dog used to find bad guys in a building or patrol the fence around a base. After about a year and a half working with these dogs, Jiran was selected to go to bomb dog school. The handler and dog have to be certified as a team.

“I’m most proud of the work we did in support of the hostages returning from Iran,” he said. For 444 days from November 1979 to January 1981, 52 Americans were held hostage in that country.

When the hostages were released, they spent time in Germany before they transitioned back to the United States. “Security was tight,” Jiran said. “I was one of two dog handlers assigned to ensure their safety while there and make sure they got on a plane to safely get back home.” 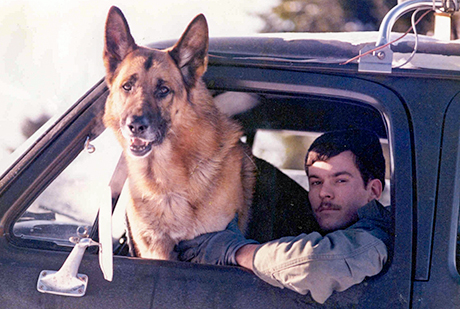 Jiran and his partner Tork cleared buses and ground transportation, the hospital where the former hostages were living and the aircraft.

And then there was the mail. “When they were released, many Americans and American companies sent 52 of everything – from 52 lobsters from Maine to 52 blue jeans from Levi’s. These had to be cleared to make sure there were no explosives before they could be shared.”

That was also the year the United States ice hockey team won the Olympic gold medal, beating the Soviet Union team on their way to the medal. “The hostages obviously missed that, so tapes of the events were sent to them. It was really kind of cool watching them see the events unfold without a clue the Americans not only had a shot to win, but did.”

Tork lived nine years and never retired. Jiran worked with a number of dogs during his eight-year Air Force career.

“My dogs were more than just partners, they were part of me, an extension of me. If you work explosives like I did, you trust that dog with your life,” Jiran said. “I relied on Tork’s nose to be 100 percent accurate 100 percent of the time. The dog isn’t just protecting me but also the other people who are going to be operating in that environment. 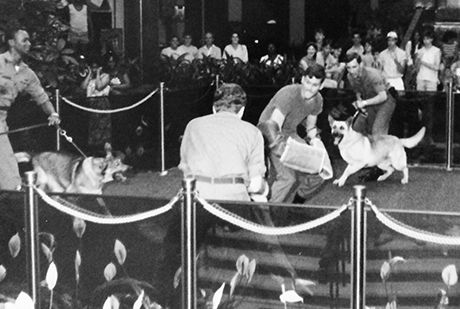 That's Rick Jiran getting bitten during a military working dog demonstration at Shaw Air Force Base in Sumter, S.C.

“But nothing I did back then compares to what the young men and women are doing today. Looking for IEDs in Iraq and Afghanistan – that’s just a whole different mission than I ever dreamed I would be responsible for at 18 years old. Today’s working dog teams – handler and dog – are a special breed.”

Military dogs are veterans, he said. They’ve worked hard to keep Americans safe and they’ve earned the right to retire and be given the respect their service has earned them. “They may be dogs and not understand what their service truly means, but they work hard day in and day out and deserve not only our thanks and gratitude, but a pretty awesome retirement, too.”