Elizabeth "Bunny" Johns followed a serendipitous path to the river – and nearly 60 years later into the International Whitewater Hall of Fame.

Her journey began in 1959 after her first year at Stetson University in Florida. She returned home to Avondale Estates east of Atlanta expecting to wait tables at a fancy restaurant, only to discover that the job was no longer available.

The next day, she happened to get a call from a friend who was supposed to teach swimming at Camp Merrie-Woode in Sapphire, N.C. The friend no longer wanted the job and wondered if Johns was interested. A competitive swimmer through high school, she jumped at the opportunity. 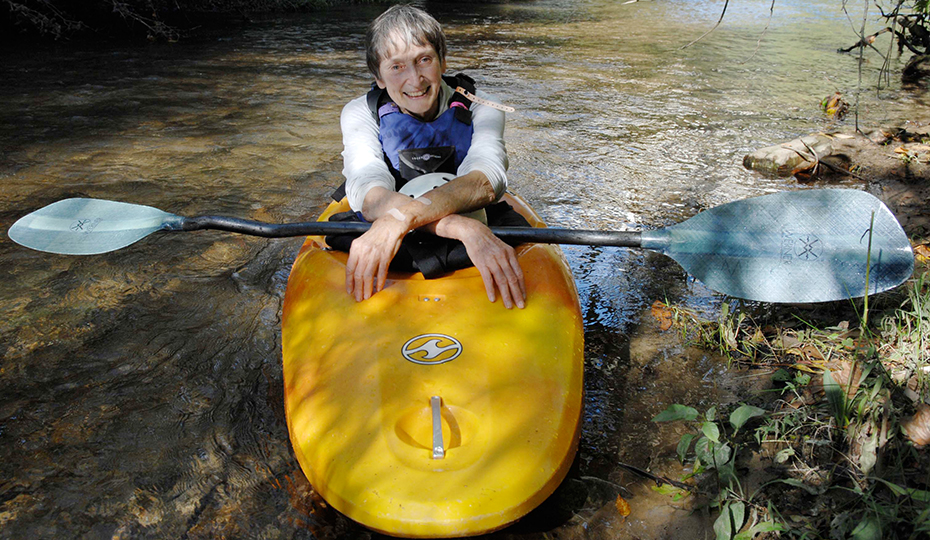 Bunny Johns has been inducted into the International Whitewater Hall of Fame.

And that’s how she found herself in a canoe for the first time at age 18, learning the power stroke, the j-stroke and other paddling techniques. She taught campers swimming and they taught her how to canoe – a requirement before they achieved the rank of captain.

Her passion for the river was born.

She has run the Grand Canyon about 10 times. She and Mike Hipsher earned the Gold Medal in a double canoe at the 1981 Wildwater World Championships in Wales. In 24 years at the Nantahala Outdoor Center near Bryson City, N.C., she revolutionized the way whitewater paddling is taught.

In October, Johns was recognized for her lifetime of dedication to teaching others when she was inducted with three others into the International Whitewater Hall of Fame. The organization saluted her “for her sport-changing facilitation of how the process, technique, and safety of whitewater paddling instruction was taught and shared across the USA.”

But when asked what she considers her greatest legacy, Johns didn’t mention paddling or the thousands of people she taught. “I think it will be just that I was the person who wanted most things to work out for as many people as possible,” she said. “In general, we’re a very rich country but we have lot of people in dire straits. … I want to see us become a little more egalitarian.”

Told what Johns said, Juliet Jacobsen Kastorff, who owns Endless River Adventures, responded: “That is so Bunny. She is such a wise person, and caring. She has an ability to get people to think about doing the right thing, whether it’s a business decision or a decision that will affect the community or politically. She has a good way about her.”

In 2000, Johns left the Nantahala Outdoor Center, where she was president. It was another serendipitous moment. Jacobsen Kastorff calls it “one of the most fortunate things for the entire community.”

“It was right when Duke Energy was doing relicensing of the Nantahala and Tuckasegee (rivers), a really, really critical thing not just for our industry but for the entire community,” Jacobsen Kastorff said. “Duke brought Bunny on as a consultant. … She had that way of being able to steer people in the right direction.”

“When you’re trying to get renewed licenses from FERC (Federal Energy Regulatory Commission), you have to do a lot of studies, including recreation studies,” Jester said. “Bunny set up the studies, got stakeholders to participate, conducted interviews, etc. etc. She worked with anglers, paddlers, outfitters, advocacy groups and staff from the N.C. Wildlife Resources Commission, the N.C. Division of Water Resources, and the U.S. Forest Service to help them come to a solution on how to share the waters of the Tuckasegee River.

“She helped Duke Energy understand what recreationalists needed, and she helped all those people understand and appreciate what Duke Energy needed in terms of its operations.”

Settlement agreements were signed in 2003. FERC issued six hydroelectric licenses for the Nantahala area in 2011 and 2012. 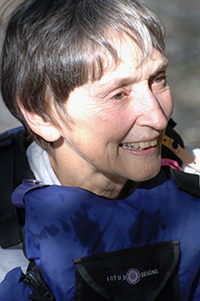 When Duke Energy created its Water Resources Fund in 2014, Jester again turned to Johns for her expertise. He asked her to serve on the committee that is awarding $10 million in grants to improve water quality and quantity, promote fish and wildlife habitat and increase public access in North Carolina and South Carolina. “She understands and can speak for Western North Carolina very well,” Jester said, “and she can speak for recreational interests as well.”

She’s been called the “grande dame” of paddling in Western North Carolina and is a mentor to other paddlers. Even at 76, you’ll still find her out on the rapids of the Nantahala and the Tuckasegee. She hopes to complete at least one more run down the Chattooga.

“I’m not out challenging myself like I used to,” she said. “But I still love the river. I love the movement of the river. I love working with the river. It’s so beautiful. A lot of these rivers, from when you put in to the time you take out, you’re not going to see anybody else. For me, it’s all about the challenge of the whitewater, making the moves and the beauty of the place.”

When she’s not paddling …

Avid hiker. “I did a 3½ hour hike up to a ridgetop from the NOC then back down a couple of days before the ceremony.”

About her nickname. Her given name is Elizabeth. She said her mother called her “Bunny” because she was “soft and cuddly like a little rabbit.” But much to her mother’s dismay, the nickname stuck. Johns holds a doctorate in plant physiology from N.C. State University, but most people still know her as Bunny.