Randy holds Jojo's leash while Jane holds Paisley, and Boo, another of the Gantts' dogs, hides behind Randy.

Jojo is enjoying her new home and is pictured here with a custom, embroidered collar.

Jojo is described as a wild child by her new family.

Randy and Jane Gantt foster several dogs each year at their home in Stanley, N.C.

In early 2016, Jojo was facing euthanasia at a shelter in Rocky Mount, N.C., when Jane drove four hours to rescue her and two other puppies. Jojo was riddled with worms and so thin that her bones were visible. Jane intended to help her gain weight and find her a new family, but it didn’t quite work out that way. 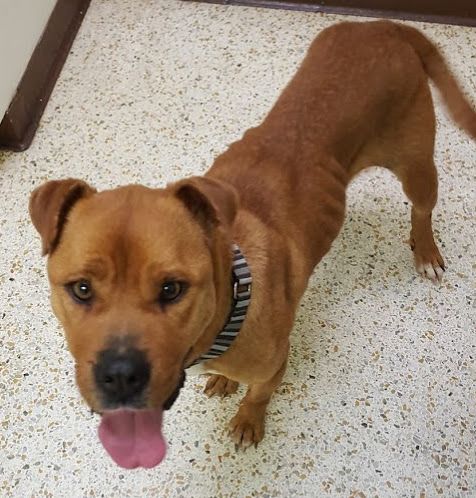 Jojo was malnourished and too thin to be spayed when the Gantts took her in as a foster in February 2016.

They nursed her back to health in 2 ½ months, and Randy, who works for Duke Energy as environmental field support at Allen Steam Station in Gaston County, N.C., developed a bond with Jojo.

“Randy doesn’t say much,” Jane said, “but I could tell he was attached because he started distancing himself from Jojo the week before she was supposed to leave.”

The Gantts rescue several dogs a year and had a packed house with nine dogs of their own, so keeping another wasn’t in the plan. When it was time to send Jojo to a no-kill shelter in the Midwest, they reluctantly put her on a bus with 18 other dogs.

“We didn’t say anything to each other at the time,” Randy said, “but in the next day or two, I told Jane, ‘I think we’ve made a mistake,’ and Jane said, ‘Yeah, I was ready to go run the truck down.’”

That's what Randy did.

Jane tracked down Jojo’s location at the shelter, and Randy rented a car to drive 1,000 miles to Onalaska in western Wisconsin to adopt Jojo.That’s what Randy did.

Randy’s friends couldn’t believe he would make such a trek – one even asked if he had his brain scanned recently – but Randy said unless you foster, it’s hard to understand why Jojo was worth it. 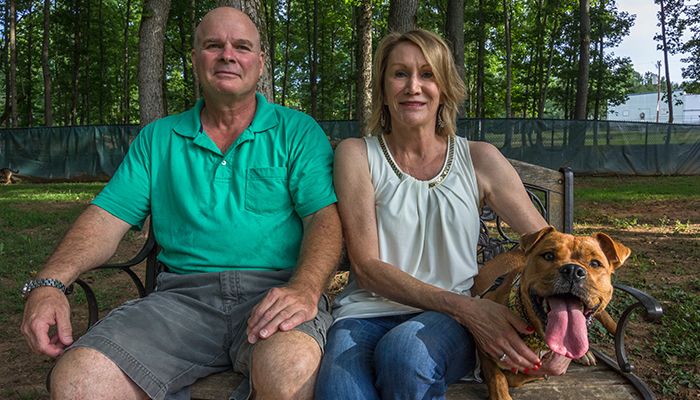 Randy and Jane with Jojo, their 10th and newest adopted dog.

Jane thought Jojo had a unique look when she brought her home, but she didn’t expect Randy to become so attached. Randy said he can’t explain the connection, but he watches TV with Jojo like he did with a previous dog that died, so maybe she fills that void.

“We probably should’ve thought through [giving her away] a lot sooner,” he said, “but sometimes, you don’t know what you got until it’s gone.”

Jane volunteers for several area rescues and belongs to an internet community that transports dogs facing euthanasia to foster families or no-kill shelters. Each volunteer is responsible for one leg of what might be a cross-country trip.

“I’m sure my Facebook friends get annoyed at all of my posts, but it helps find these dogs homes,” Jane said.

She said it’s depressing yet rewarding to take a dog out of a shelter. On their way home, Jane stops at a drive-thru to buy her new foster dog a “freedom cheeseburger.”

“If people are considering adopting a dog or a cat, they need to consider going to a local shelter because those animals need a place too,” Randy said. “I know that some people look for breeders for specific dogs, but people would be surprised at what turns up at an animal rescue or Humane Society or county animal control.”

All 10 of the Gantts’ dogs are foster failures, a shelter term for foster parents who get too attached and end up keeping a dog. There’s a variety of breeds: dachshunds, Chihuahuas, Jack Russell terriers, boxers and mixes of all sorts. The couple bottle-fed some of the dogs as puppies when they started fostering 10 years ago.

What’s it like to have 10 dogs? Randy says it can be total chaos. 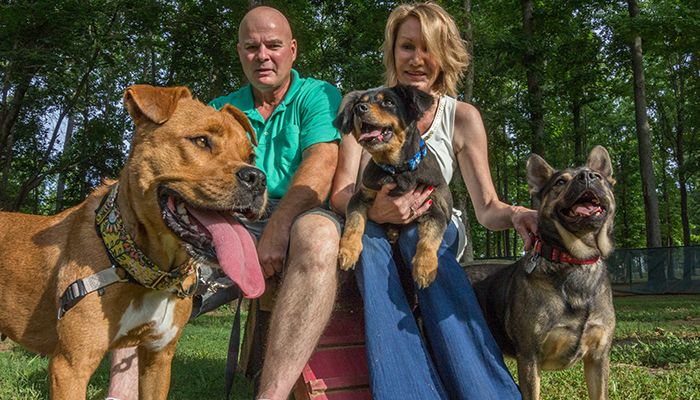 Jojo, from left, Boo and Paisley with the Gantts.

She’s constantly nipping at Dock, a 65-pound boxer mix, but he takes it well. The dogs can roam the 1-acre fenced yard and use the dog door for access to the house. The Gantts go through a 50-pound bag of dog food every couple of weeks, veterinary bills compound quickly, and vacations are hard to take, but Randy said it’s worth it.

“A lot of times, once it’s gone, it’s gone,” said Randy. “You never get it back, but in this case, we could do something about it.”

Want to adopt?
To adopt or foster, visit Petfinder, where you can find animals near you.
Tags: pet adoption, foster dogs