A breeze blows across the Catawba River and the rocky shoals spider lilies begin to dance, their paper-thin blossoms dipping and swaying atop sturdy green stalks.

Acre upon acre of white blooms stretch improbably across the rushing water, the largest known stand of the rare lilies in the world.

For a few weeks every year, from mid-May to mid-June, the spidery blossoms draw visitors to Landsford Canal State Park in South Carolina, 40 minutes south of Charlotte. To see the lilies, most people take a short walk through the woods to an observation deck overlooking the river. My family prefers to experience them up close, by canoe or kayak.

We set out early before other visitors arrive so we’ll have the river – and wildlife – to ourselves. On this stretch of the Catawba, the water flows much the way it has for millions of years, before so many dams and lakes and houses.

Once, we surprised a deer grazing in the shelter of an island. It skipped across the rocks in front of us like a child crossing a mountain stream, plunged into the channel and swam to the opposite shore before disappearing into the woods. We’ve watched eagles and ospreys dive-bomb for fish, and great blue herons stand in silent sentinel. 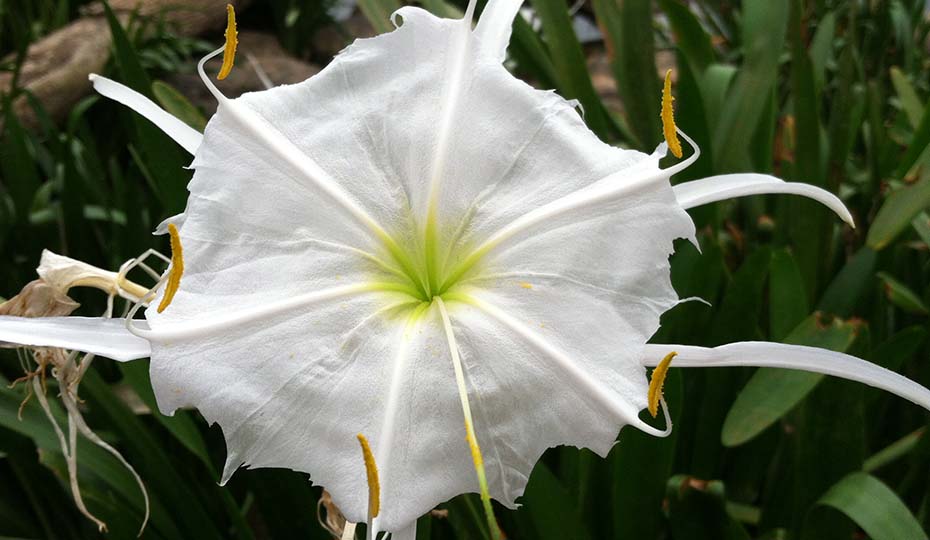 On our last visit, an otter swam beside us.

But the lilies are the show-stopper.

To find them, we paddle downriver through a series of small rapids, scouting for routes around the rocky shoals that give the lilies both their name and their habitat. In the early 1800s, boats ferrying goods to and from the coast used nearby Landsford Canal to bypass this difficult stretch where the elevation drops.

You can explore the remains of the canal – stone bridges, culverts and locks – in the 448-acre state park. The canal was one of four built on the Catawba-Wateree river system and is listed on the National Register of Historic Places.

The river’s flow is regulated by Duke Energy which – as part of the Comprehensive Relicensing Agreement for its Catawba-Wateree Hydro License – plans to build a new parking lot and canoe/kayak launch for the park. 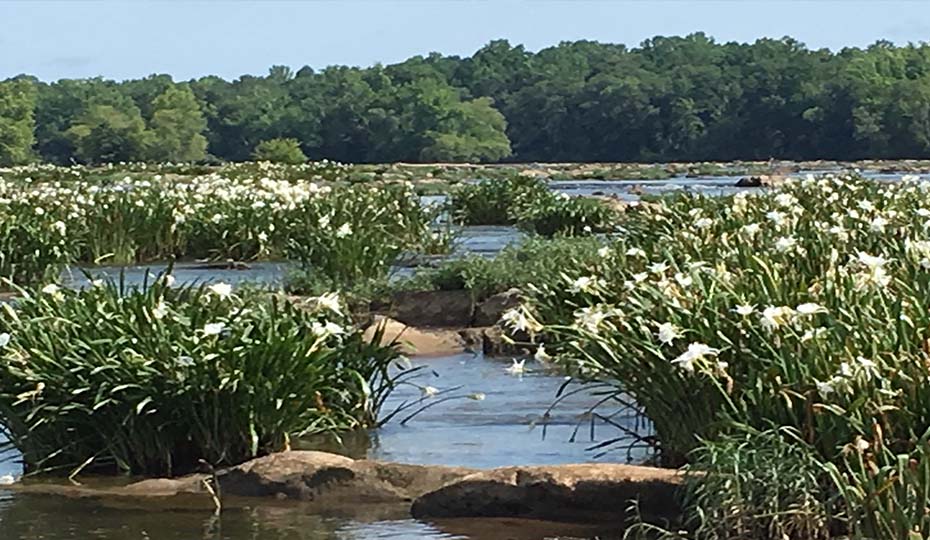 The lilies grow on the fall line, about a mile downriver as the canoe zigzags. Their bulbs lodge into crevices among the rocks. The first time I saw them, I wondered how the dainty flowers (Hymenocallis coronaria) could survive so much water tumbling past them, and, after heavy rains, over them.

Al James, who manages the park, told me the shoals act as a natural filtration system. He warned that if this stretch of the river is ever developed, silt from runoff could choke the lilies. Already they are listed as “a national species of concern.”

Rocky shoals spider lilies are found only in South Carolina, Georgia and Alabama.

In the middle of the 22 acres of blooms on the Catawba, there’s a sandbar where we stop and swim. We are surrounded as far as we can see by fragrant white blossoms, six spidery petals attached to large coronas. A turtle, surprised by our arrival, plops off a log and into the water. The only other sound is the rushing of the river. 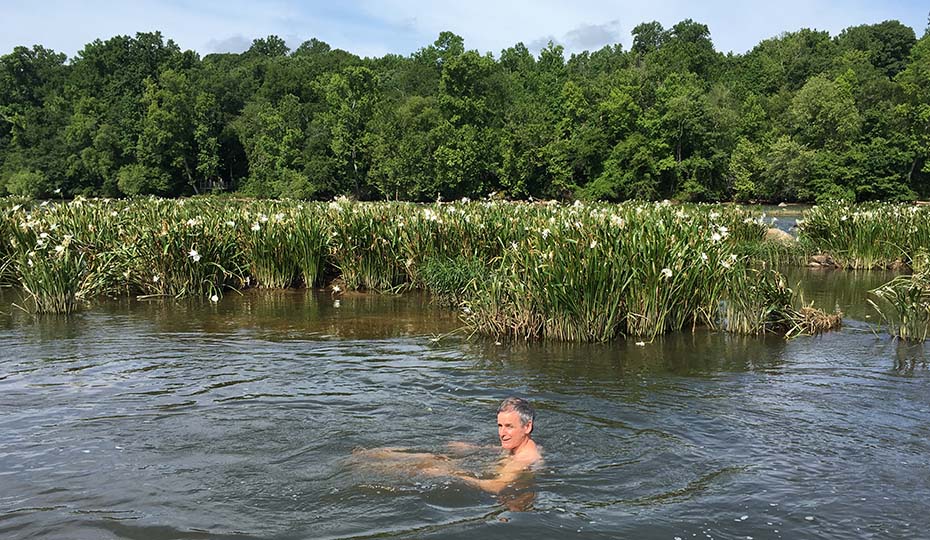 For a few moments, we are alone with one of nature’s wonders.

When it’s time to leave, I am always reassured: Next year, we’ll be back – and so will the rocky shoals spider lilies.

How to see the magical lilies