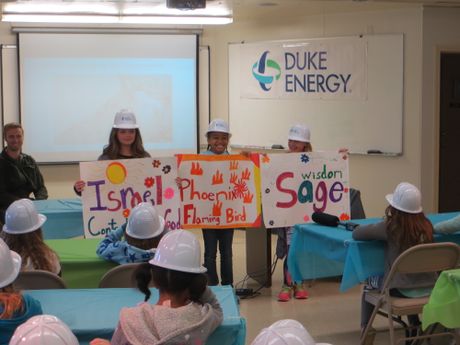 Peregrine falcons may not be on the endangered species list any more, but they’ve got special friends in Indiana.

After three falcon chicks were born on a perch at Duke Energy’s Gallagher Station smoke stack B recently, the Indiana Department of Natural Resources (DNR) retrieved them for banding and a naming ceremony.

John Castrale, who works with DNR, showed them off to more than 50 students at Gallagher Station’s training center in New Albany, Ind., northwest of Louisville.

The third- and fourth-graders from Mt. Tabor Elementary School held firmly onto their rolled poster boards, which had the winning names for the chicks. As Castrale arrived, the posters were opened to display the names: Phoenix (flaming bird), Israel (contender with God) and Sage (wise). Teams of students had been assigned to research possible unisex names. About 12 names were presented for voting by the students.

After the naming, Castrale, along with Allisyn Gillet and Nathan Sonderman from the DNR, banded the four-week-old birds on the legs and took a blood sample to monitor genetics. A yellow band is for identification in future nesting; a red band contains an identification number, which is submitted to a U.S. Fish and Wildlife database, along with the blood sample.

“Banding of the birds provides a valuable source of information to document migratory behaviors and survival of birds,” said Castrale. 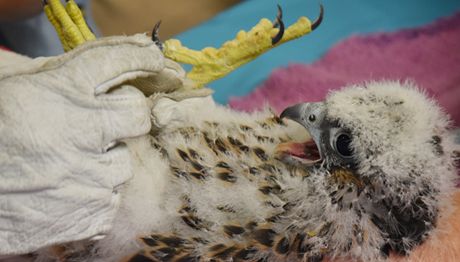 In all, Castrale has banded about 600 chicks. “As an adult, the falcons may travel over 200 miles to find a nesting point,” Castrale said. “However, one falcon was identified almost 2,000 miles away in Costa Rica.”

During their research, students learned that Peregrine falcons are the fastest bird on the planet, reaching dive speeds over 220 mph. The babies are born with a white down feather appearance. The falcons will then start to look like an adult and learn to fly and hunt. If they survive the first year, average life expectancy is 19 years.

“To be granted a scientific opportunity like this is just unbelievable, and I’m glad our kids are able to be part of that,” said Scott Burch, a Mt. Tabor teacher.

“This is just a wonderful opportunity to partner with the school, partner with the state DNR, and provide a once in a lifetime opportunity for these kids to firsthand see these amazing birds,” said Lisa Huber, Duke Energy Indiana community relations manager. “This is something they will never forget.”

After the chicks were banded and shown to the students, Castrale climbed back up the stack and returned them to their nest box. 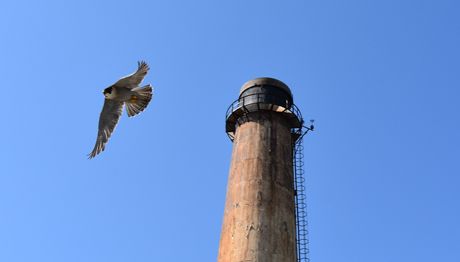 In the late 1970s, Peregrine falcons were on the endangered species list and rare east of the Mississippi River. In the early ’90s, federal and state agencies worked with falconers and organizations to reintroduce the Peregrine falcon population. Nest boxes were built atop cliffs and tall structures. Some birds were bred in captivity and injured birds were treated and relocated near nesting points. In 1997, Gallagher Station worked with the Indiana Department of Fish and Wildlife Resources:

Peregrine falcons are no longer on the federal list of threatened and endangered species, but remain a special focus in Indiana.