A handshake and a commitment to serving community launched Piedmont Natural Gas more than 65 years ago.

That handshake grew into a business with $1.37 billion in annual operating revenue from more than a million customers in North Carolina, South Carolina and Tennessee before its purchase Oct. 3 by Duke Energy in a $6.7 billion transaction. Piedmont now operates as a Duke business unit.

How did it all come about?

In 1951, Donald S. Russell, a Spartanburg, S.C., lawyer and leader of a group of local businessmen who had recently incorporated Piedmont Natural Gas Company, struck a deal with W.S. Robinson, vice president and general counsel of Duke Power. Piedmont wanted to capitalize on the region’s growing manufacturing appetite for energy and foresaw natural gas from the Gulf of Mexico supplanting coal-manufactured gas. Piedmont would buy Duke’s residential gas business serving 34,000 customers for $5 million with a $1 million down payment.

There was just one problem: Piedmont didn’t have $5 million, or the $1 million down payment.

Undeterred and confident in Russell’s reputation from serving in the Roosevelt administration, Robinson told Russell not to worry: “We’ll just have a handshake, and you and I will agree.”

Piedmont began service to two Charlotte neighborhoods in 1951, registering a net loss of more than $750,000. It was an inauspicious beginning that belied the success ahead.

Growth was steady through the 1950s and ’60s as demand increased in both residential and commercial sectors. In 1968, Piedmont acquired Carolina Natural Gas Company and had more than 100,000 customers by the end of the turbulent 1960s.

Piedmont Natural Gas historian Jerry W. Amos said 1970 was a milestone year for the company. In his book “A History of Piedmont Natural Gas,” Amos reported the company met all the requirements for listing on the New York Stock Exchange with total assets in excess of $100 million. The company’s 1.7 million shares of common stock were held by 7,000 shareholders around the world. Buell Duncan, Piedmont’s first CEO, purchased the initial 100 shares when the stock listed on Feb. 3, 1970. 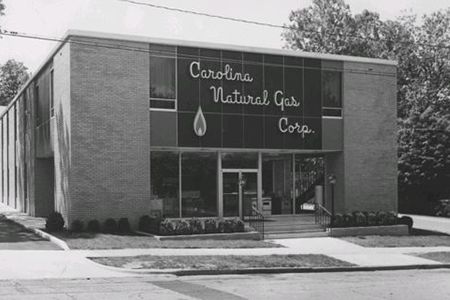 Carolina Natural Gas Corp.'s headquarters in Hickory, N.C., before its acquisition by Piedmont.

“For many years Piedmont’s primary business was natural gas distribution,” said David Trusty, managing director of public relations for Piedmont. “While this remains our core business, over time we’ve branched out into complementary joint ventures. Natural gas storage is an example. We are involved in liquefied natural gas storage and partner with other companies. We are partners in a joint venture, Hardy Natural Gas Storage, an underground storage facility in West Virginia. We are also partners in an intra-state natural gas pipeline, Cardinal Pipeline.” 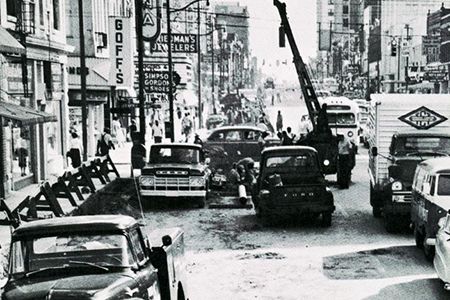 Gas mains being installed on North Tryon Street in Charlotte, N.C., in 1959.

“One of the key cultural elements to Piedmont’s success throughout our history has been our emphasis on community development,” Trusty said. “It began with our very first CEO, Buell Duncan, whose philosophy of ‘Build your community and you build your company’ has always been part of our approach in doing business.”

Civic and community engagement and involvement routinely extended from the executive suite throughout the entire Piedmont organization. 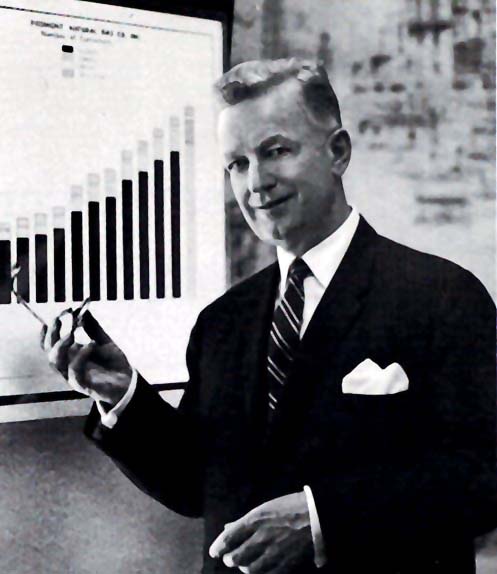 The Piedmont Natural Gas Foundation, established in 2004, recently donated $100,000 to the YWCA Central Carolinas. The funding helps support the Y’s efforts on behalf of homeless women and children.

“Piedmont Natural Gas is a ubiquitous and leading presence throughout Charlotte’s civic community and, frankly, in every market they serve,” said Bob Morgan, who leads the Charlotte Chamber. “The civic leadership they provide starts at the top but includes folks throughout the organization who are actively engaged.”

The promise of safely delivering natural gas into customers’ homes and businesses is Piedmont’s overriding priority and the organization’s most important value.

“Our commitment to safety aligns perfectly with our new parent, Duke Energy,” Trusty said. “We provide natural gas service safely and deliver on our brand promise of peace of mind. We want people to go to bed at night and go to work every day not having to worry or give a second thought to their natural gas service. There is an entire team of more than 1,900 employees with safety as their top goal.”

Duke Energy’s acquisition of Piedmont creates a company with electric and natural gas customers in seven states. For Piedmont Natural Gas, which now operates as a subsidiary of Duke Energy, a new chapter begins in a story that parallels the growth and success of the communities it serves.