There are several key differences between the first three names and last one. First, Muddy, Lightnin,’ Howlin’ and Big Mama are performing at the Great Juke Joint in the Sky, while Near-Blind is still among us. Second, those three performed the music, while Near-Blind displays his blues persona playing the music that he loves on the radio.

Oh, and Near-Blind Ken has a day job. 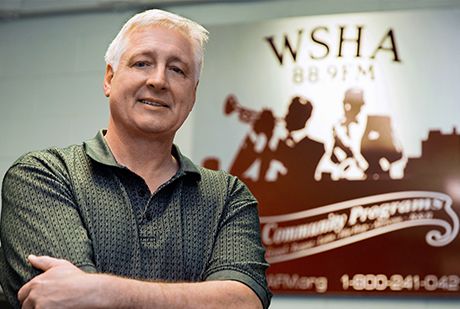 By day, Ken Arnold works at Duke Energy’s Energy Control Center in Raleigh, N.C., as a senior IT network control specialist. He began his career at Carolina Power and Light (CP&L) in 1981 on a Telecommunication Construction Crew where he climbed communication towers, installing telephones and data circuits.

But each Friday evening, Arnold transforms and assumes a second identity as Near-blind Ken, hosting “The Blues is the Blues is the Blues” show on WSHA 88.9 FM in Raleigh at Shaw University. There he plays a variety of blues artists, from his favorite Piedmont blues indigenous to his home state, to the classics. Helping him out is his partner Silent Dave, who lends his blues knowledge to Ken in the background, off-mic. 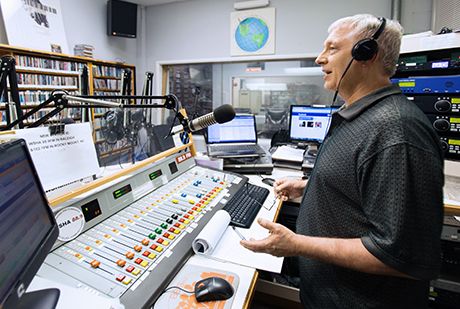 Arnold’s love of the blues, and all music, began in his Plymouth, N.C, high school band, where he played the bass drum and was exposed to a variety of music. “Our band played everything from Cole Porter to Carlos Santana to Franz von Suppé.”

But it’s the blues that strikes the biggest chord. “I love the double entendres in the blues; I know I have heard some songs many times for many years and thought it meant one thing,” he said, “and then one day I may hear it and the song takes on a completely different meaning. If you don’t listen to the words, you may miss what is really being said. The blues are like that.”

Catch “The Blues is the Blues is the Blues” every Friday night on listener-supported radio, WSHA 88.9 FM in Raleigh, N.C., from 8 p.m. to midnight. You can stream WSHA at wshafm.org or listen via the free Tune-In radio app. For more information about WSHA, contact General Manager Nicole Gye’Nyame at 919.546.8321.

Arnold’s DJ career began in 2008. With no radio experience, he started volunteering at WSHA on Thursday nights. He’s been doing the Friday night show since May, when Stan the BBQ Blues Man resigned (see what I mean about nicknames?).

And speaking of nicknames …

When Arnold began his Friday night show, Stan the BBQ Blues Man convinced Arnold that any self-respecting bluesman needed a blues name. On that particular night, Arnold had forgotten his reading glasses and he had to tell the audience that he was having difficulty reading the artist names and song titles.

“My brother Wade called me and said, ‘Ken, that is your Blues Name, Blind-Boy Ken. I replied, ‘I’m not blind, I’m just near blind,’ and that’s when my brother exclaimed, ‘That’s it, Near-Blind Ken!’ The listeners and the other DJs liked the name so it stuck.”