Editor's note: This is an essay from Brittany Wallace of Clover, S.C., in recognition of her husband's sacrifice and work as a Duke Energy lineman in Charlotte for National Lineman Appreciation Day, April 18.It’s a distinct sound as the bucket truck pulls down the drive after being called out for hours, days or even weeks. To a 2-year-old, it is better than the musical tones of an ice cream truck. The clanging and clatter means one thing: Daddy is home!

I am never more honored to be a lineman’s wife than when I see it through our son’s eyes. Our little boy runs to him as soon as he walks through the door, hugging his dad’s red, dirt-covered jeans as he takes off his boots, which are almost taller than the little guy. 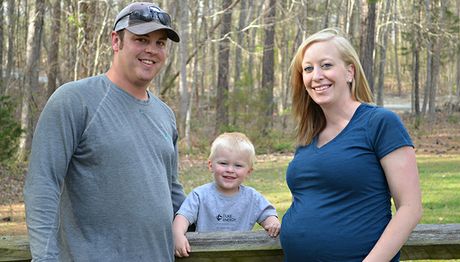 A family picture of Brittany, Carson (middle), and Tommy, who has worked as a lineman for more than 10 years.

My husband, Tommy, has been a lineman for more than 10 years. He has devoted his livelihood to give power to the community. He has traveled as far as Texas to aid after Hurricane Katrina and to Indiana for snow and ice storms. When you become a lineman’s wife, you have a whole new outlook on life. The weather channel becomes your new favorite TV station. You follow the power outages, and learn to be patient, and try not to ask a million times, “when do you think you will be home?” You become thankful for the time together on holidays, knowing that one of his coworkers could be missing time with his family. All while trying not to worry, despite knowing he works in a dangerous career yet feeling secure because his lineman “family” is taking care of him.

April 18 is recognized as National Lineman Appreciation Day. Linemen work with thousands of volts of electricity high atop power poles 24 hours a day, 365 days a year, to keep electricity flowing. I am thankful for all of the linemen working hard every day and to be a lineman’s wife not only on Lineman’s Appreciation Day, but the other 364 days in the year.