Going into the military shaped Jim Pritchard’s life, and now it’s shaping his sons’ futures. Tricia Pritchard, who works at Robinson Nuclear Plant in Hartsville, S.C., said of her husband, “His military service directly influenced his career choice and inspired our children.” 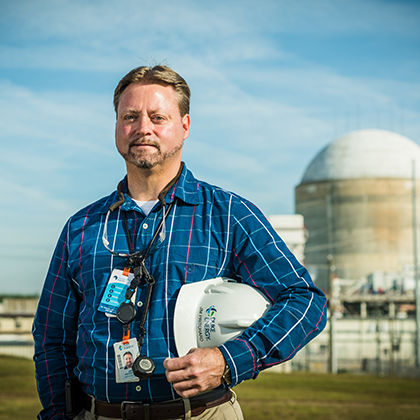 Jim Pritchard works in nuclear security at Robinson – as he did at Crystal River Nuclear Plant in Florida – and said, “Most of my adult life has been around protection and defense.” At Duke Energy, safety is still paramount in his work.

He entered the Army right out of high school and served at Fort Bragg, N.C., for four years in the 82nd Airborne Division as an infantry squad team leader.

Jim shuns the spotlight and isn’t one to talk much about himself. “There are a lot of other people I look up to in the military who deserve more attention than I,” he said. “I have the utmost respect for all military personnel.”

The military is a family affair. Jim’s grandfather was in the Army and his brother is retired from the Air Force. Jim’s son, Joshua, a high school junior, has been a member of the Army's Reserve Officers' Training Corps (ROTC) for three years and plans to enlist when he graduates.

Tricia calls Jim “a positive influence” for her son, Tyler, who recently completed Navy recruit training and is at Fort Sam Houston in San Antonio, Texas. “I encouraged him in the direction of the military or college,” Jim said of his stepson. “I challenged him that he can complete both by entering the military to help him provide structure while also pursuing an education. He did his research and chose the U.S. Navy.”

“Veterans,” Tricia said, “are the highest quality of role model we can have.”