When ShaDonna “Mo” McPhaul joined the Air Force in 1996 at age 18, she had plenty of support. Military service is a family tradition.

“Almost everyone in my family,” she said, “served or married someone who served.” 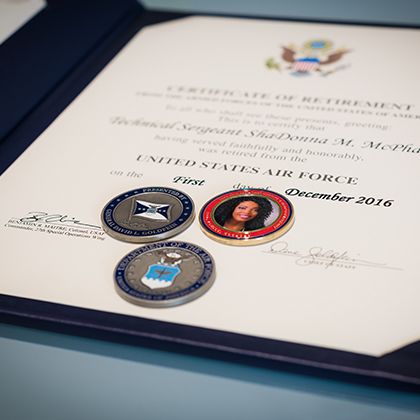 Every summer, she visited her aunt and uncle, who both retired from the Army. They were her main influences for joining, but a grandfather, a stepfather and lots of cousins also served.

McPhaul, a Piedmont Natural Gas customer contact representative, continues to serve – in a different way – even after retirement. She began Mo’s Heroes four years ago. It’s a nonprofit that helps raise awareness among homeless veterans of the assistance available to them. “There’s a huge population of homeless veterans,” she said. “And I always think: Don’t they know about the veterans’ benefits?”

She’s using social media and her own weekly radio show to help spread the word. “Information dissemination,” as it’s called in the military, is one of the primary skills she took from her service.

During her 20-year military career, McPhaul got to see the world. She was stationed in her hometown of Fayetteville, N.C., at Pope Air Force Base but also served at Eglin Air Force Base (Florida), Joint Base Pearl Harbor (Hawaii), Cannon Air Force Base (New Mexico) and bases in Korea and Germany.

Her work in the military (which taught her to “seek out solutions”) has helped in her job at Piedmont Natural Gas in Fayetteville. “I was one of the first people new members to the base communicated with, so I had to be knowledgeable to help everyone adjust to their new assignment.”

McPhaul sees similarities between the military and Duke Energy: Teamwork and discipline are crucial, she said. And “both organizations take great pride in taking care of their people.”

Everyone knows courage is required in the military, but McPhaul wants people to know something else. “We are real people with real emotions, although we were trained to hide them during war and other hostile situations,” she said. “Veterans would give our last dollar to help support our brothers and sisters in need.”