Ben Bradberry served in the Navy. So did his dad, Bob, an engineer during World War II.

Although more than 40 years separated their service, they “both traveled the same parts of the globe and visited some of the same ports,” said Ben Bradberry, an IT configuration manager for Duke Energy in St. Petersburg, Fla. 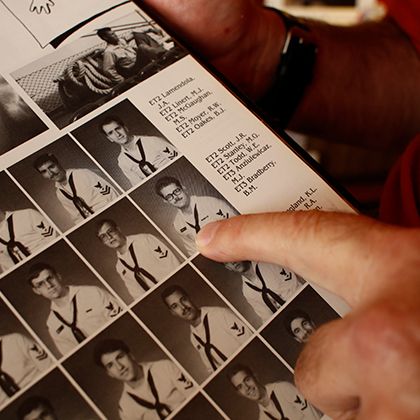 Bradberry served as a nuclear engineer from 1985 to 1991 and in the Reserves for a year afterward. He and his father were both stationed in the Pacific.

“I passed by Midway Island, same as he did – only he was there in much more hazardous times. We both crossed the International Date Line and the equator onboard ship to graduate from pollywogs to shellbacks.”

For the uninitiated, “pollywogs” are Navy personnel who have never been over the equator. “There’s a ceremony to initiate pollywogs,” Bradberry said. “Then they become shellbacks and do the initiating on future cruises.”

While “pollywogs” may not be a common expression, some Navy lingo is widespread, Bradberry said. “It’s amazing how many nautical terms are adopted in civilian organizations like Duke Energy. ‘Is everyone on board with that?’ and ‘We are all in the same boat’ are just two examples.”

Beyond lingo, an emphasis on safety is something Duke Energy and the military share. “Like aboard ship, a focus on safety can prevent injury and save the lives of shipmates and teammates,” Bradberry said. “Compromising can literally be life or death.”

Military service gave Bradberry a “profound appreciation of the U.S. Constitution,” he said. “Few people who haven’t served realize that when you volunteer for service you are waiving your constitutional rights during your time of service in order to protect those very rights for the rest of the citizens of this country. Ironic.”

Sailors are tough, but they can also be sentimental. “Although my dad passed away shortly after I joined the Navy, I know I had made him proud,” Bradberry said. “And our common naval experiences made me feel closer to him than I had ever felt before.”