Editor's note: Some of Duke Energy’s corporate communications teammates went into areas in the Carolinas hit by the Dec. 9 snow storm to help provide information to customers and to tell the stories of the aftermath.

As crews were restoring power across the North Carolina Triangle on Monday, sleet and snow continued to fall. We met up with two Duke Energy lineworkers on Old Lead Mine Road where they were restoring an outage on underground cables. 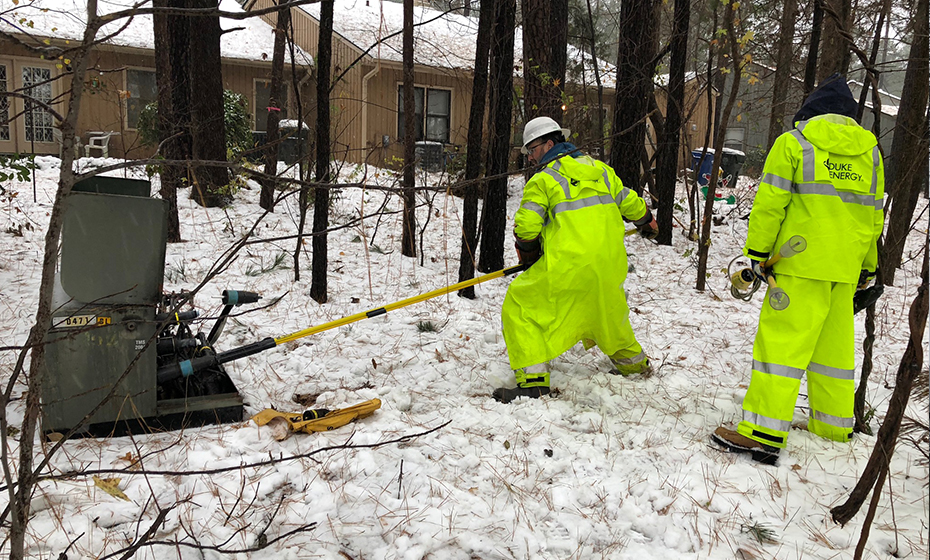 Jimmy LeBlanc, a 16-year veteran with the company, explained that while underground lines provide a lot of benefits, they can be harder to repair when an outage occurs. Trouble shooting the outage itself can take time to locate the issue – what could take two hours on an overhead line can take up to four times as long on an underground line.

LeBlanc and Matthew Sanders were testing sections of power lines between transformers to locate the problem. “It’s like testing a string of Christmas tree lights when you’re decorating your home for the holidays,” LeBlanc said. “If you have one strand with an issue, that’s lights out for the whole tree.”

In this situation, one underground segment of the line resulted in an outage for more than 100 customers off Sawmill Road in Raleigh. This is just one example of the challenges of inclement weather.

Despite tough conditions, LeBlanc and Sanders said they appreciate customers’ patience and kind gestures as they work to bring the lights back on. The goodwill from the community certainly makes the job easier.

Trees beautify Triad, but can cause danger

Trees are part of the natural beauty of the North Carolina Triad region, but they’re also one of the main causes of power outages in storms. 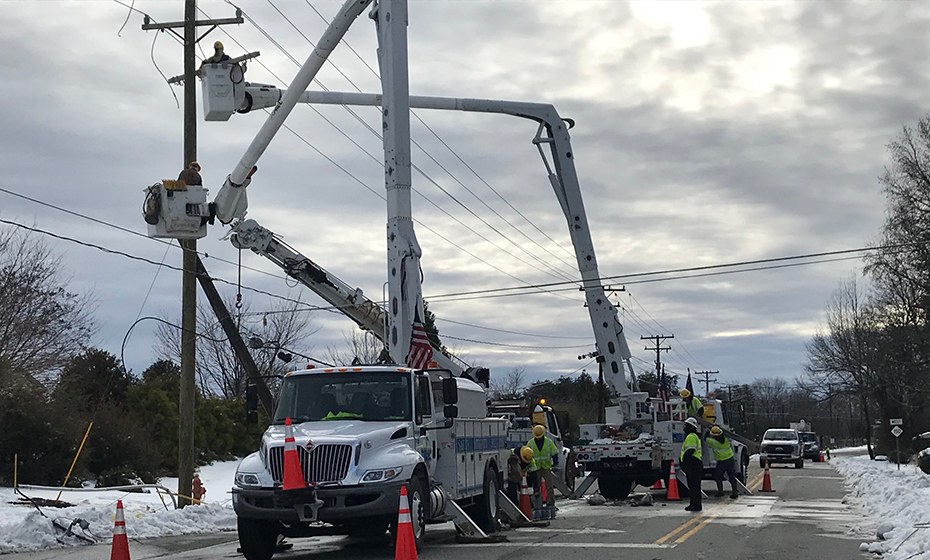 Crews spent Monday restoring outages from Sunday’s storm, including new outages that occurred overnight because of wind and ice. At almost every outage location we visited, we saw downed trees and tree limbs, which led to broken utility poles and power lines.

To tackle the volume of outages, Duke Energy relies on the teamwork of contractors and companies. For example, at an outage along N.C. 150 in Kernersville, we saw crews trying to remove a tree that had taken down multiple power lines and snapped three poles. We also saw nearly a dozen contract lineworkers removing and replacing the broken poles and reattaching all the power lines and equipment. 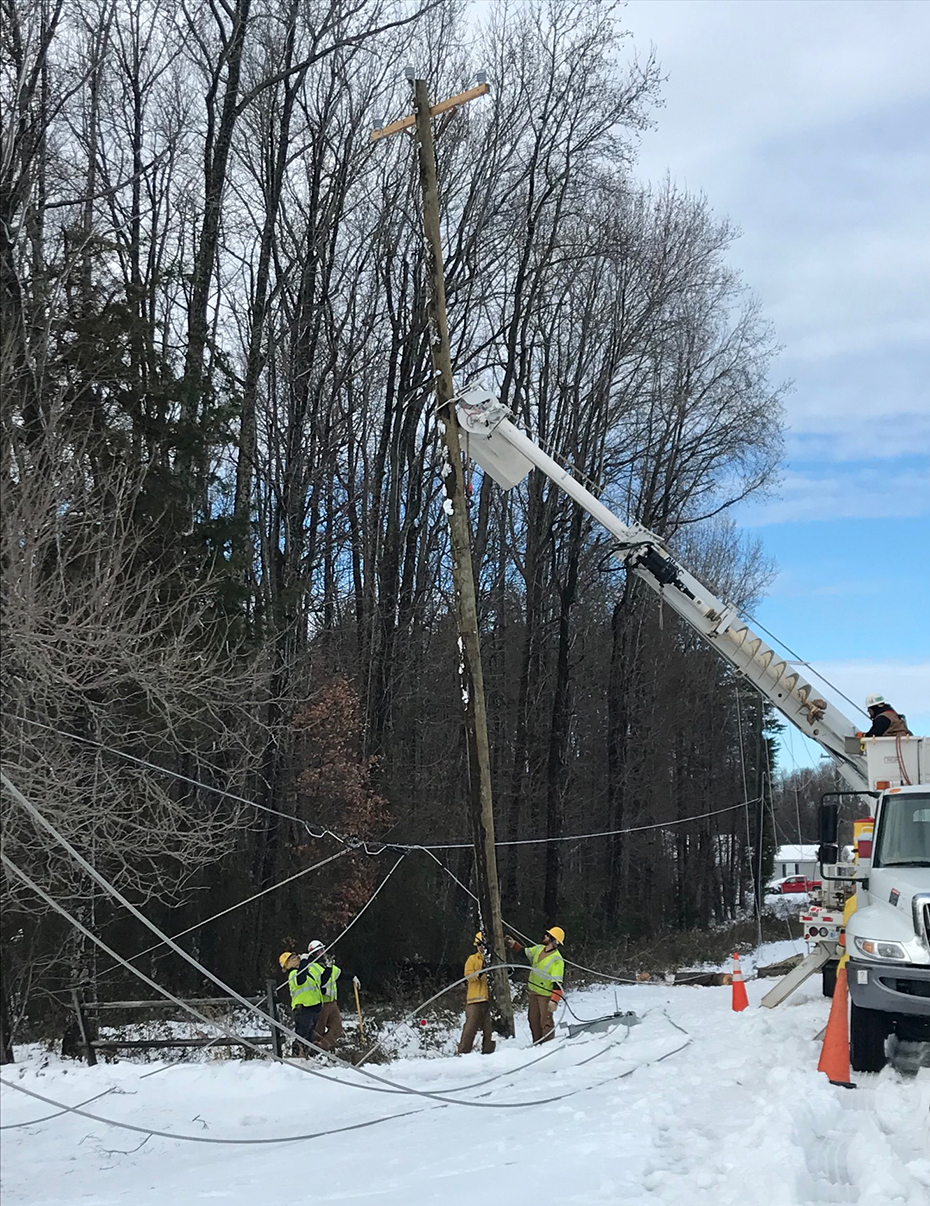 The outage blocked a major highway – coordinated with traffic control and safety specialists who worked to ensure crews and motorists were safe during the repair. Altogether, it took 30 workers more than eight hours to restore this one outage affecting 2,500 customers.

Multiply that across the thousands of outages across the state and you start to understand the army it takes to restore power after a major storm.

If you’ve seen crews making repairs, they may have come from the Midwest, Florida or Ohio to help restore the power as quickly and safely as possible. It’s a carefully orchestrated and amazing operation that continues to impress me storm after storm.

Walking through a backyard can be a tricky business after a storm. 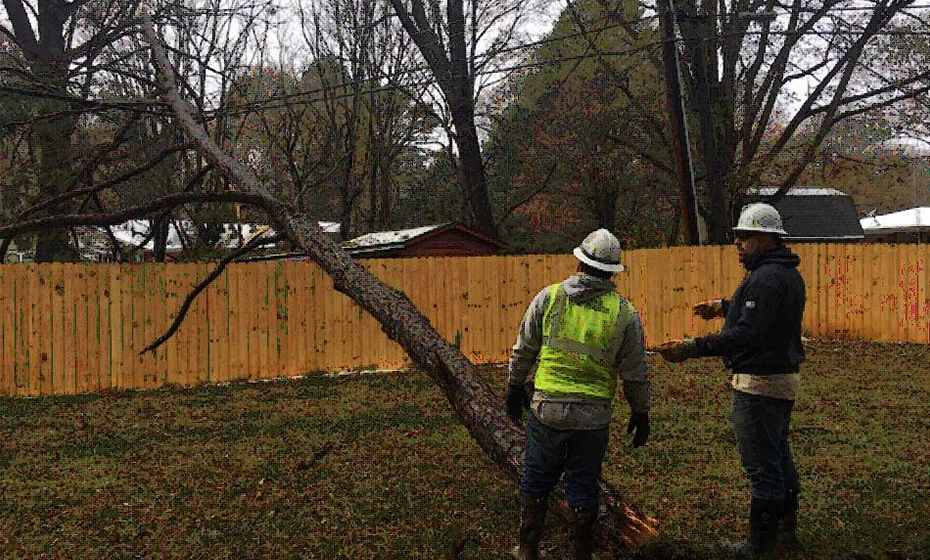 Tree branches and stumps. Divots in the grass. Mud and wet leaves matted together. Occasional dog droppings. These are just a few of the obstacles line crews deal with when restoring power.

And move on to the next back yard.

Lineworkers are first on the front lines in South Carolina

The energy company lineworker is a first responder, and the utility business operates much like law enforcement, fire and rescue – if there is a problem, they all head that direction. That’s never more apparent than when a hurricane or storm leaves people in the dark.

Duke Energy prepared for Sunday’s storm by contacting other utilities and utility contractors to ensure extra help would head to the Carolinas to assist in restoration efforts. 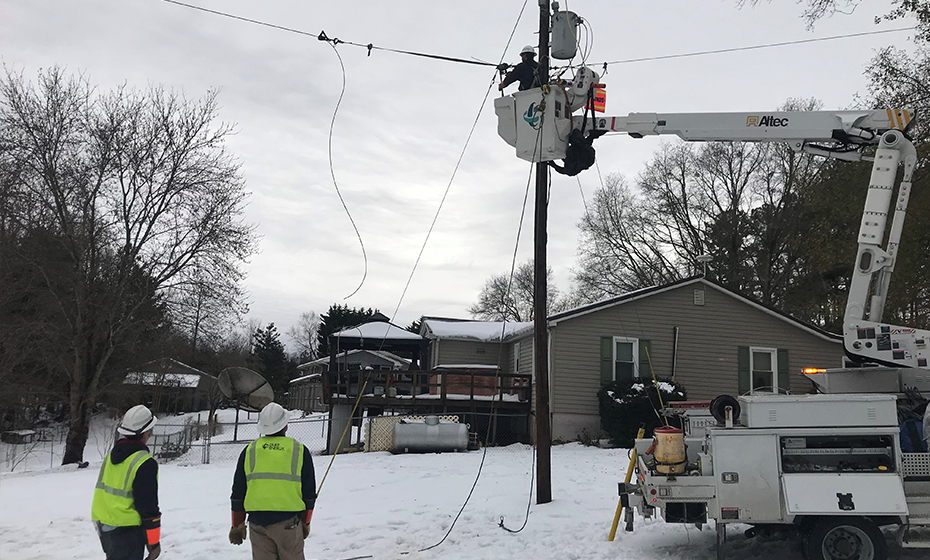 And because of the size of Duke Energy – and the strategic location of each service territory – it also means fellow Duke Energy teams from the Midwest, Florida and the eastern Carolinas can respond.

That’s why teams from Florence, S.C., were in Spartanburg and Greenville counties Monday, stringing wire in the backyards of Campobello and on the side of the road in Taylors. It’s not the first time many of them have been in the Upstate. They traveled here to support the recovery from Hurricane Irma just last year and many other storms before that. And they are here because the Upstate teams were in Florence and Dillon and Marion just a few months ago to help after Hurricanes Florence and Michael.

The utility lineworker is a first responder, a member of a team that heads to the trouble to help get the lights back on no matter whose customer.