The convoy of bucket trucks that rolled past Dave Bowyer’s Boiling Sp​rings, S.C., home delivered a powerful message – one of respect and honor for the 35-year veteran of Duke Energy.

Line crews from Duncan, Greenville and Spartanburg were part of bucket truck parade last week for Bowyer, a third-generation Duke Energy teammate diagnosed with cancer. The parade was a grassroots effort to honor him. 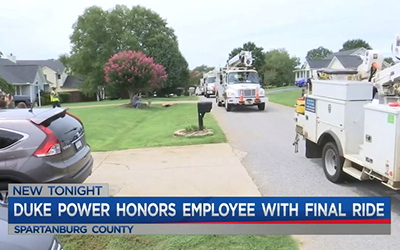 Click the image to watch the bucket truck parade on Fox Carolina in Greenville, S.C.

“We wanted to let him know how much we cared for him – and supported him,” said Jeannine Bowers, director of Customer Delivery Area Operations.

Bowyer’s wife, Kelly, said the family was especially moved by the parade. “Words cannot express what this gesture meant to us,” she said. “Dave had a smile so big when those trucks came rolling down the street.”

He began his career as a lineworker in Spartanburg and wore several hats during his career, including equipment specialist, in the Marketing Department and Distribution Training Department. He’s also known for having a passion for keeping employees safe. In the Training Department, he played a critical role in the roll-out of safety protocols for all of Customer Delivery. Currently, he is the operations supervisor in the Duncan Operations Center. 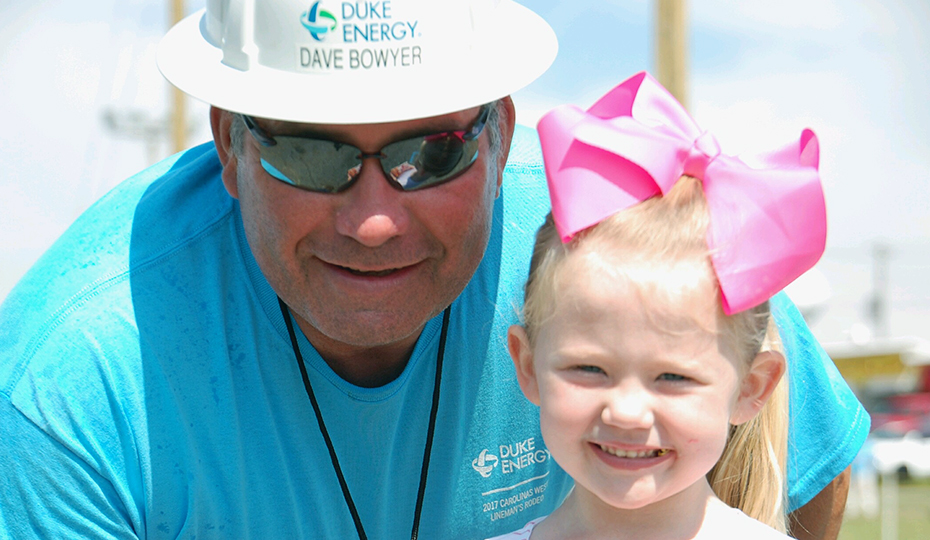 In addition, Dave made several trips to Nicaragua on mission trips for orphans, has served​ as a board member for the United Way of Spartanburg County.

Bowyer’s leadership and dedication have been important to Resource Manager Olin Raffaldt, who has worked with him for 30 years, and Distribution Line Tech Bralion Hyatt, who works for him now.

“Dave is a family man,“ Raffaldt said, “and Duke Energy is just an extension of his family. He’s a top-shelf guy – they don’t come any better.”

Hyatt concurs: “Even though Dave has been sick, he’s been coming in to check on his guys,” Hyatt said. ​“He has been more than a supervisor. He is a friend.”