Craig Mustard is accustomed to being in the limelight. He was a star quarterback throughout high school and college. But now in his home state of Ohio, he has become somewhat of a different kind of star and it’s taking a bit of getting used to.

Mustard is the muscular lineworker featured in Duke Energy ads popping up on Facebook and elsewhere on social media, riding a brightly-lit carousel with his daughters and then riding a utility bucket to the top of a power pole. “It feels good,” he says on the commercial, “knowing I’m helping build a smarter energy future for all of us – for my family and yours.”

Making the ad – they were at it until 1 a.m. – was the latest adventure in what has been a whirlwind of a year for Mustard and his family. In January, he was part of a contingent of 227 Duke Energy workers who deployed to Puerto Rico to help restore power to the devastated U.S. territory after Hurricane Maria.

For two months, he worked in rugged conditions unlike any he had experienced.

For two months, his wife, Kate, managed alone at home with their daughters, Brynn, 6, and  Brooke, who turned 8 while her father was away. “It was an extremely hard adjustment at first,” Kate Mustard said. “But he was doing it to help others in need.”

The toughest part, though, was missing Brooke’s birthday. “No dad ever wants to miss their child's birthday, especially at a young age when they don’t understand fully.”

While in Puerto Rico, Mustard was interviewed about Duke Energy’s efforts and he did such a good job his supervisor suggested him for the commercial. “He’s a good speaker on Duke’s behalf,” said Craig Pfeiffer, supervisor at the Brecon Op Center in Cincinnati. “He’s highly thought of in our lineperson community here. He has a good work ethic.” 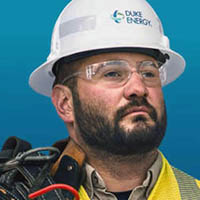 Mustard said he graduated with a degree in business administration from Mount St. Joseph University in Cincinnati, where he played quarterback for the Lions and where he and Kate met. He never intended to work indoors. “I was looking for a career that paid decent, and I didn’t want to be the type who sits behind a desk. I’m more of a hands-on, physical kind of guy.”

He poured concrete for three years. Then in 2011, a friend suggested Duke Energy and he’s been with the company ever since. “It’s been a perfect fit for me,” Mustard said. “There’s a lot of teamwork. And you get to use a lot of your knowledge and the skills you acquired over the years. I feel they’ve invested in me, and given me top-notch training.”

What Mustard likes most is the independence. “We’re on our own,” he said. “We don’t have somebody watching over us. We get to make decisions on our own. That’s pretty cool.”

Recently, he became a troubleperson, responding to immediate issues from the call center, nights and weekends, seven days a week, 24 hours a day. 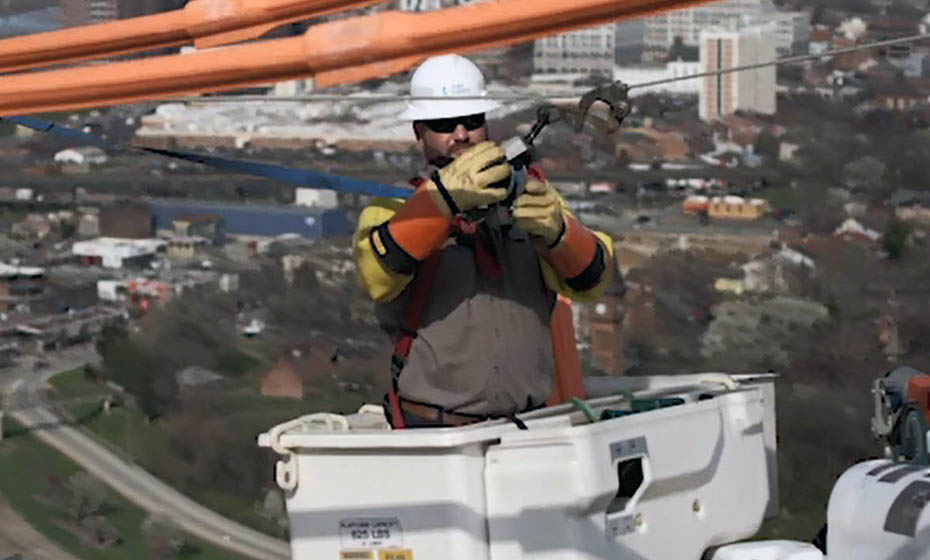 Lineworker Craig Mustard on the job.

“One of the things about this job, you never stop learning,” he said. “With all the new advancements in technology that come out and the different material we get to work with, it’s constantly evolving and you’re constantly learning. Every day you see something new.”

Even when he’s not at work, you’ll likely find him outdoors. He enjoys camping and boating with Kate and the girls.

They also joined him on the commercial. “The two little girls, they’re princesses,” he said. “They loved the makeup.” Mustard not so much. “I don’t do makeup,” he said. “They put on some sort of blush or something to reflect the light for a good shot.”

He said it’s strange to watch himself on the commercial but he’s taking it all in stride. “I felt like a movie star for a little bit. It was an experience of a lifetime.”