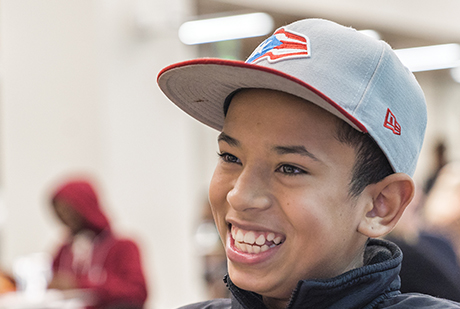 He’s mapping a future that includes college and veterinary school. But first he’s got to navigate the realities of middle school, especially challenging because English is his second language. When he struggles with class work, needs help solving a problem or just wants someone to talk to, Rick Rodriguez listens.

Rodriguez, an engineer and MBA who’s the residential customer insights manager at Duke Energy, is Luis’ big brother. It’s not a biological relationship, but a relationship formed through Big Brothers Big Sisters of Greater Charlotte.

Every other week during the school year, Luis and 35 other Sedgefield Middle School students ride a bus to Duke Energy in uptown Charlotte to eat lunch with their big brothers and big sisters. It’s a working lunch, with the bigs leading the littles in exercises designed to help them succeed in life.

They talk about setting goals, working hard in school, managing money and making smart choices. For some, those goals include attending college and pursuing professional careers, which would make them the first in their families to do either. 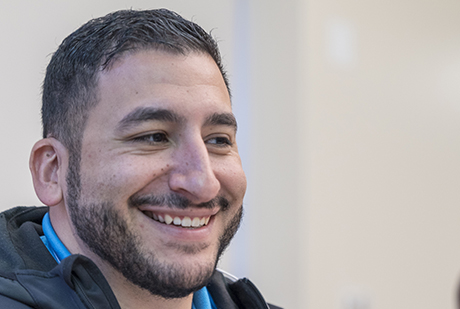 Duke Energy joined the Beyond School Walls program four years ago and for the past two has partnered with students at Sedgefield, which is a high-poverty school. The Duke Energy Foundation this year gave $36,000 for the mentoring program. Duke Energy is one of three Charlotte-area companies participating in the Beyond School Walls program. The others are Ally Financial and LPL Financial. The companies provide adult mentors for 88 children. All told, Charlotte's BBBS agency serves more than 1,300 children.

Some matches, like Rodriguez and Luis, also spend time together outside of work and school.

The two like to go out to eat; Luis will try anything he’s served. They go to movies and play board games. Luis, 12, admits that he plays mind games, such as the stare down, when he and Rodriguez compete. It’s part of his winning strategy.

“Me and Ricky, we’re of Puerto Rican descent, both of us. He’s a very cool guy, he’s got a good sense of humor and he’s very respectful,” Luis said and then grinned as he teased Rodriguez about lacking game skills.

“He likes to talk trash,’’ Rodriguez said, shaking his head.

Rodriguez said he enjoys the time he spends with Luis. He’s single without kids of his own and though he’s close to his sister’s children, they live too far away to see or mentor on a regular basis.

“Luis is a really good kid. He’s easy-going and fun to be around. He’s very respectful … he does value what I think of him. This is an opportunity for me to feel like I’m contributing positively to someone else’s life.” 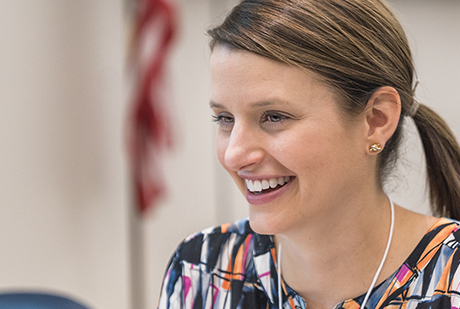 Rodriguez said mentoring Luis connects him to his own family’s history.

“My parents experienced similar challenges to Luis growing up, having to adapt to a new language and culture in their formative years. That is an area where I think I can help him and it has really brought us closer together.”

Big Brothers Big Sisters program coordinator Kshari Ellis said it’s clear that the Sedgefield “littles” have benefited from their relationships with their Duke Energy “bigs.” In a survey at the end of last year, 94 percent of the littles reported life improvements such as academic achievement, better behavior and social and emotional development.

The overall goal is to create long-lasting relationships, Ellis said. “I enjoy seeing the littles empowered to see different careers and maybe one day think that they may want to be in the same career as their bigs.”

Kathryn Whitten, a Duke Energy economic development specialist, says she’s seen her little sister, Destany Cass-Wyatt, develop more self-confidence in her abilities. The two go to movies and restaurants and have picnics at a park. Their biggest outing was a Selena Gomez concert.

“It’s valuable for her to get to know someone in the workplace outside of her family, and valuable for me to get what’s going on inside the middle school mind,” Whitten said. “She keeps me up to date on the latest trends and fashion.” 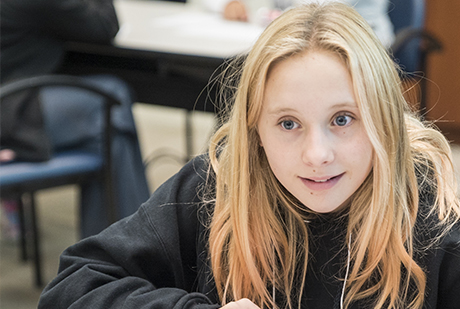 “She helps me when I’m stuck on school work. She has a good personality and she’s a good role model,” Destany said of Whitten. “She encourages me to keep going in my education and to stay strong.”

Pamela Ratliff, assistant principal at Sedgefield Middle, says she has seen big changes in kids participating in the program.

"They're a lot more focused and a lot more mature,” Ratliff said. “The relationship they’re getting here − it adds another level of someone who cares. It’s been phenomenal. Watching the smiles on the kids’ faces shows me the people they’re talking to are listening to them.”