Lionel Hampton, a Louisville native, played in an integrated jazz band at a time when most nightclubs weren’t integrated. It was the 1930s – the Jim Crow era – when Benny Goodman hired African-Americans (pianist Teddy Wilson and vibraphonist Lionel Hampton) to join him and drummer Gene Krupa in his eponymous quartet. 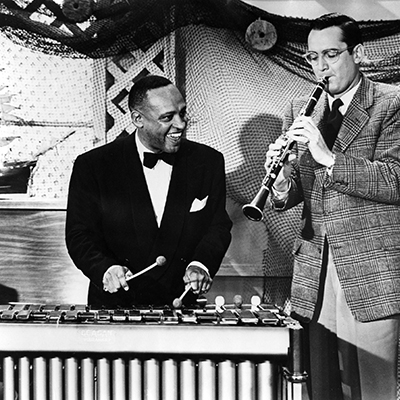 Lionel Hampton on the vibraphone with Benny Goodman.

“They were extremely popular,” said Rick Dior, professor of percussion at UNC Charlotte and a member of the Charlotte Symphony Orchestra. “Anyone who turned on a radio during that era heard them.

“And being part of an integrated band was significant,” he said. “This was long before Martin Luther King and the civil rights movement. They had to have an escort travel with them so they could safely stay at the same hotels. Lionel Hampton was not just influential musically; he was influential socially.”

Hampton single-handedly made the vibraphone – a hard-to-master instrument that’s similar to a xylophone – more than a background instrument. “Lionel made it possible for it to be a solo instrument,” Dior said. His big break came in 1930 when Louis Armstrong invited Hampton to play “vibes” on two songs during his show.

Hampton was big on theatrics. “He could play the piano, and he was a great drummer, too,” Dior said. “He’d flip his sticks and throw them in the air. He was always smiling, and people loved it.”

He was not just a skilled musician; he was a showman and an entertainer. Dior got to see that firsthand. As a Manhattan School of Music student, Dior was occasionally in the audience in the early 1980s for a Hampton performance. And twice, Dior got to play drums in Hampton’s backing band. “He was so energetic, but also very intense,” Dior recalled.

Over his long life and career, he started his own band – the Lionel Hampton Orchestra – appeared in Bing Crosby’s “Pennies from Heaven” and was deeply involved in building affordable housing. He founded the Lionel Hampton Development Corp. and, with the help of New York Gov. Nelson Rockefeller, built Hampton Houses in Harlem.

Hampton remained an entertainer his whole life. He died in 2002 at age 94 and is buried in Woodlawn Cemetery in the Bronx adjacent to the graves of Miles Davis and Duke Ellington.

Duke Energy is committed to supporting diversity and equality in the workplace and the communities it serves. The company works to create an environment of advocacy that supports Duke Energy's effort to attract, develop, engage and retain a diverse workforce. The company has a strong network of Employee Resource Groups focused on the needs of our employees, communities and customers. One such group is Advocates for African-Americans (A³), which provides educational and recruitment support to attract, retain and engage African-American talent, offers professional and leadership development for members, and promotes African-American cultural awareness through activities and events.