Standing at the base of a 45-foot power pole, Isabel Homan steps into climb belt and gets ready to go. Homan is 19 years old, and she’s one of the newest of Duke Energy’s roughly 5,000 lineworkers.

She started as an apprentice – the first step in a lineworker’s career – in 2021 after completing a training program at Warren County Career Center north of Cincinnati. The program taught her the basics of what it takes to be a lineworker – including how to climb, which has become one of her favorite parts of the job.

“I'm excited to go up and be able to build the pole and learn more about everything,” Homan said, “Because when I went into the program, I knew nothing. I like to look back and see how far I’ve come.”

For National Lineworker Appreciation Day on April 18, Homan took over Duke Energy’s Instagram (@duke_energy) to show what a day in the life of an apprentice is like with her crew at the Little Miami Operations Center in Ohio and how she prepared for her career. 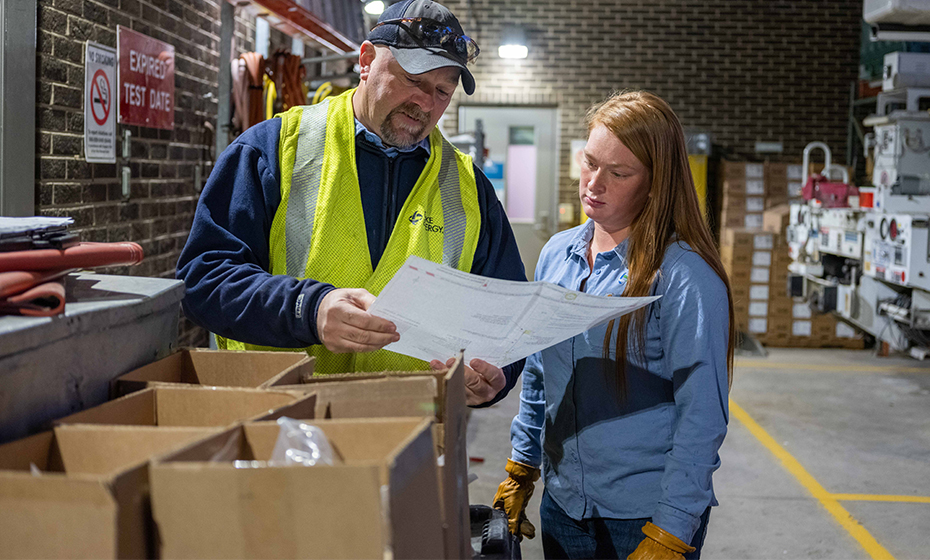 Lineworkers build and maintain the power lines and equipment that carry electricity from power plants to homes and businesses. At Duke Energy, they service 300,000 miles of power lines – enough to wrap around Earth 12 times. They’re also ready to respond when the power goes out after storms.

“Powering communities is the heart of our business,” said Scott Batson, Duke Energy senior vice president and chief distribution officer. “Lineworkers are heroes who come to work never knowing what they’ll face in a given day – and I’m proud of their steadfast commitment to serving our customers.”

Applicants can start work as an apprentice lineworker with the equivalent of a high school diploma but require years of on-the-job training and continuing education. After a four-to-five-year Duke Energy apprenticeship, they take a test to qualify as a journeyman lineworker.

Homan’s supervisor, Craig Pfeiffer, said linework can be an overlooked but fulfilling career option for the right candidate.

“People don’t always think about how the lights turn on,” he said. “Some people know they don’t want to go to college, and they like being outdoors, and if that’s your personality, this is something you can make a career and a successful living out of.” 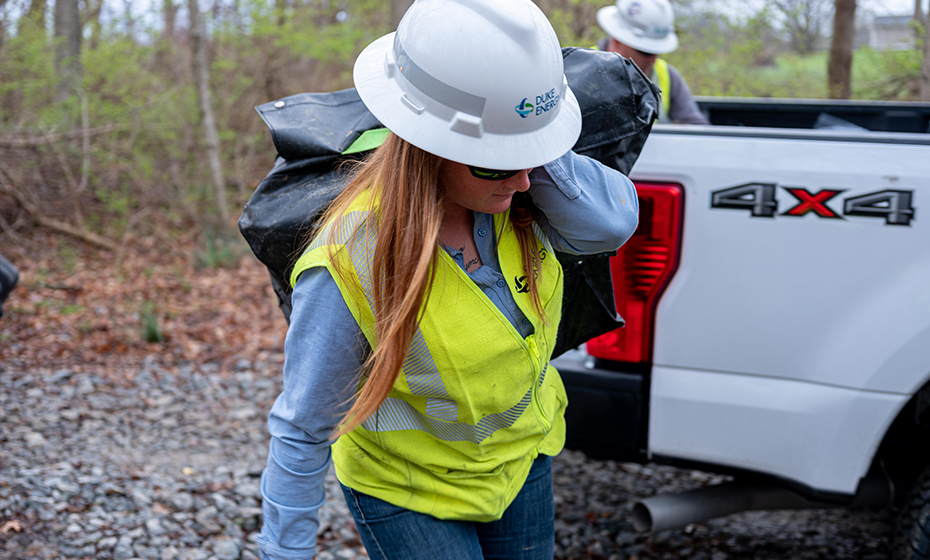 For the first six months at Duke Energy, apprentices go through basic training, earn their commercial driver’s license, practice climbing and learn materials and equipment that they will need in the field. During this time, they work on deenergized or low-voltage jobs and help with materials, stock trucks, and dig holes for their crew.

Apprentices who have been through a training program like the one Homan completed already have some of this background, which Pfeiffer said is helpful because they are able to focus on gaining experience in the field. Homan came to Duke Energy with her commercial driver’s license and a basic understanding of linework and climbing.

“That helped me a lot to be a better candidate,” Homan said. “We climbed every day, and when I went to the program, it took me forever to get to the top, but now I go to the top with no problem.” 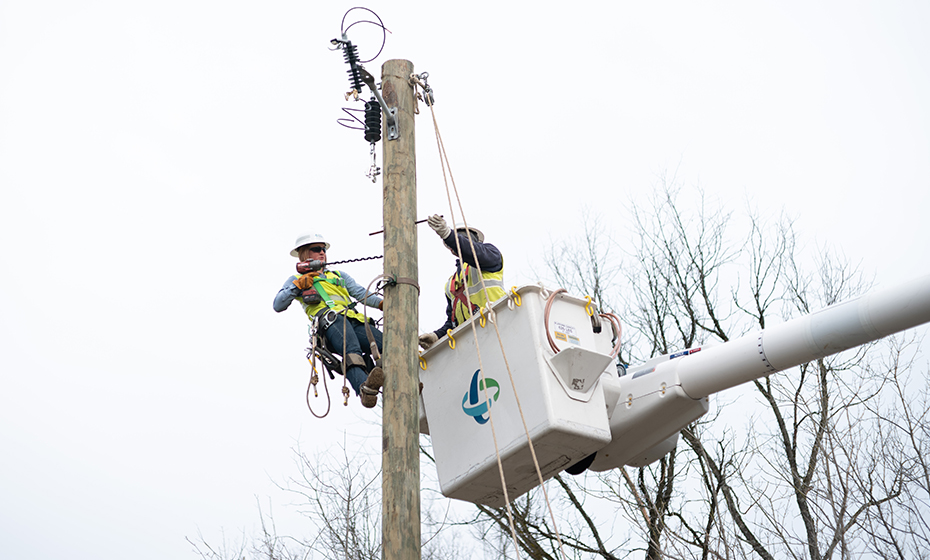 Duke Energy plans to reach net-zero carbon emissions by 2050 and modernize the electric grid to improve reliability. To do this, the company will rely on a skilled workforce and plans to bring in about 3,000 external hires in 2022. Nearly half of those will be in skilled trades like linework.

To strengthen the talent pipeline, Duke Energy supports and works with lineworker training programs in the six states it serves. Pfeiffer said apprentices will learn on the job during an apprenticeship, too, but these programs are valuable because they lay a foundation and show applicants what they can expect.

He said Homan is progressing in her apprenticeship well.

“She's done fantastic. She asks a lot of questions, and that's what she should be doing – trying to learn,” he said. “I've never seen her back away from any of the work, and she's always willing to do whatever is asked of her, so I'd say she's moving along in her apprenticeship just like she should.” 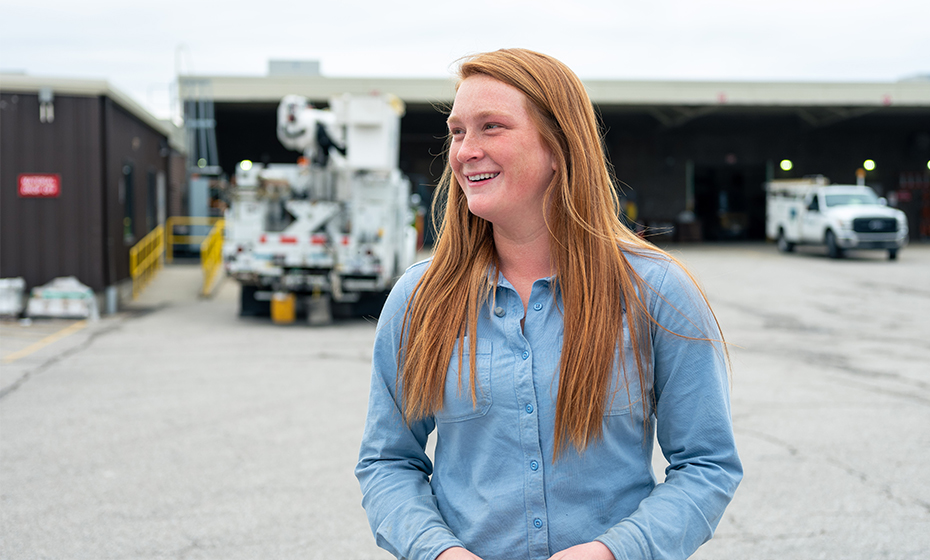 Homan wanted to pursue linework because she likes being outside, working with her hands, and she knew it would be a challenge and a good career that would allow her to support her daughter. Since becoming an apprentice, she likes being part of the team that helps the community and keeps the lights on.

“It makes you feel good turning the lights on for people and knowing you're helping others out,” Homan said. “I'm excited to look back in five years at the end of my apprenticeship and see how far I’ve come.”