Duke Energy’s corporate communications teammates are embedded with crews throughout Florida and the Carolinas to support Hurricane Dorian efforts. Here are their reports from Tuesday, Sept. 3.

Cow pasture in Florida transformed into hub for line workers

At this 135-acre cow pasture in The Villages of Sumter County, Fla., more than 7,000 line and tree-trimming trucks, trailers and specialty vehicles are inspected, refueled and ready to restore power after Hurricane Dorian skirts Florida.

In just 27 hours, the pasture was transformed into a hub for more than 5,000 lineworkers from more than 30 states across the country. The muster spot in The Villages of Sumter County is one of three strategic locations in Florida – and the largest. The other two are in Pinellas and Polk counties. 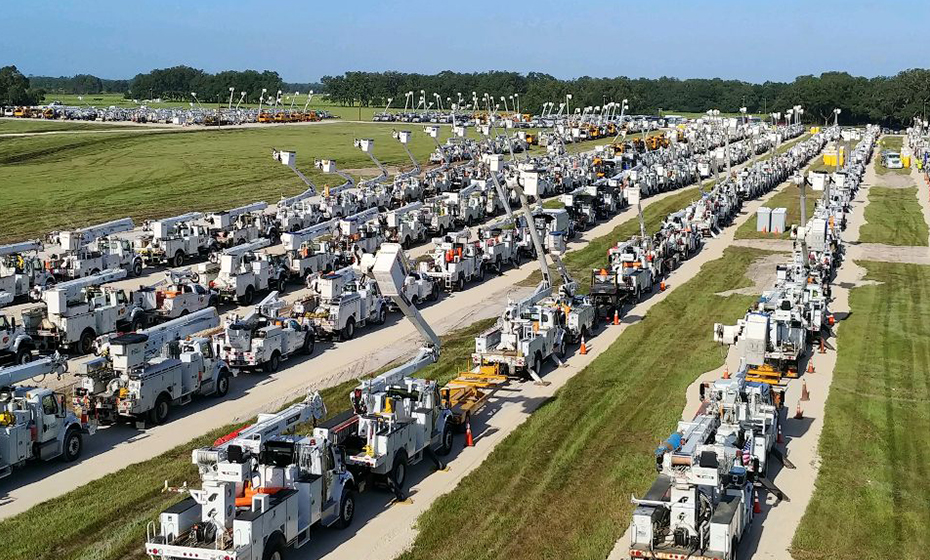 “It was like watching an orchestra,” said Matt McMurrer, a contractor for Duke Energy. He described how construction crews brought in 23,000 tons of lime rock to build the roads.

From establishing a helicopter pad to installing tents and placing lights, everyone knew exactly what to do and did it fast.

“We started moving dump trucks on Wednesday and finished on Thursday, and line trucks started rolling in that night,” said Joe Hulett, who is leading logistics at The Villages muster location. “This site is centrally located, close to major highways and will allow us to expand our operation, if needed.”

Hurricane Dorian is a slow-moving storm, so crews are waiting and wondering and anxious to get to work.

“Sitting still hurts more than getting to work,” said Michael Loper, a lineworker who traveled two days from Tennessee with a five-person crew. “That feeling when you throw the switch and heat a neighborhood (to restore power), people out there cheering, just helping people. No one knows that feeling.”

Systemwide, Duke Energy has deployed thousands – including 1,300 line crews from Duke Energy’s Midwest fleet – to help restore power in Florida and the Carolinas once it is safe to do so.

While line crews are waiting at staging areas, operations managers are also waiting and planning – in conference rooms – ready to deploy the crews after the storm. 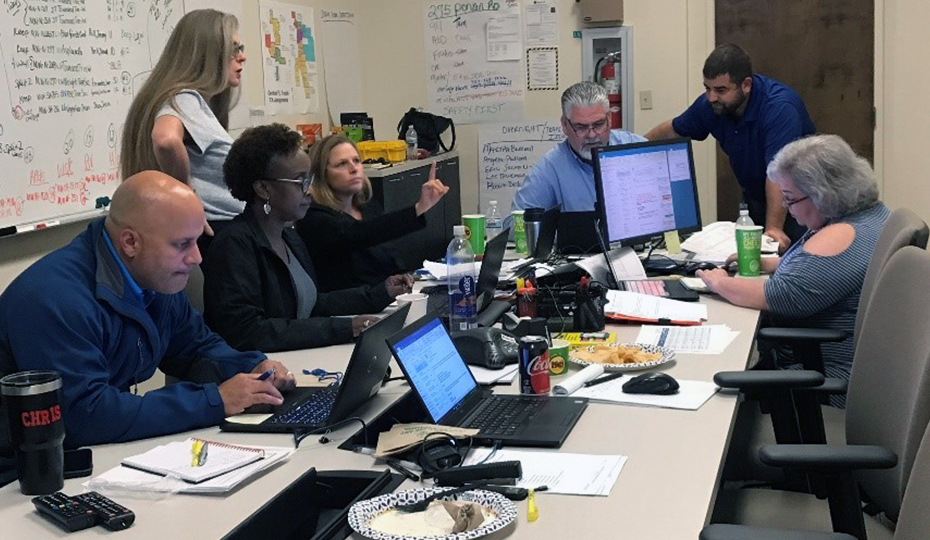 The storm center in Apopka, Florida.

At the Southeast Orlando Operation Center, Chris Lange, general manager of Customer Delivery in the Midwest, worked as incident commander. Lange learned last year during Hurricane Florence that having resources in place before the storm hits is critical to success.

At the Apopka Operations Center, conference rooms were humming, with Gary Roebuck, Central Florida incident commander, crunching formulas to make sure the company could tackle whatever stubborn conditions Hurricane Dorian would bring.

The logistics of mobilizing crews, feeding and housing them is extensive. Jake Burleson, who was overseeing the North Central Florida team, put it best when he said, “normally when we know a storm is coming, you lay out a plan and you go with it.” With Dorian, there’s a plan, but so far it’s been hurry up and wait.