Tykeiria Dade is 20 years old, is single and has a toddler. She's also determined, capable and has a support network helping her succeed. 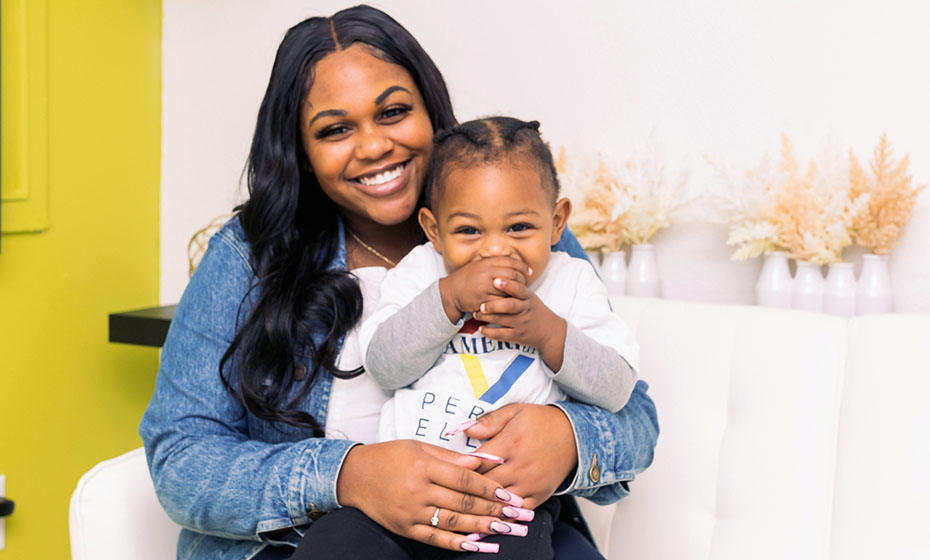 She has a job she’s good at, her own apartment, a savings account and dreams she’s working to achieve.

Besides supportive parents who live nearby, she has Freedom Communities, its preschool and its Moms Moving Forward program, which is designed for single moms with children under age 10. Crucially, the group is just around the corner from her home in Charlotte’s Freedom Drive area.

After getting plugged into the programs and services Freedom Communities offers, Ty Dade and her nearly-2-year-old son, Nashad, are thriving.

“He used to be shy,” Dade said. “But since starting Freedom Communities’ preschool, he’s much more playful with other kids – and outspoken. It’s been a blessing.”

Duke Energy supported Freedom Communities in 2021 with a grant of $25,000, part of the company’s commitment in North Carolina to help nonprofits with a focus on social justice and racial equity.

Dominique Johnson, vice president of the Duke Energy Foundation and philanthropy manager for North Carolina, said, “We’re trying to help close the gap in disparate outcomes for communities of color when it comes to education and workforce training. Freedom Communities aligns well with that goal. They provide services that can be life-changing.” 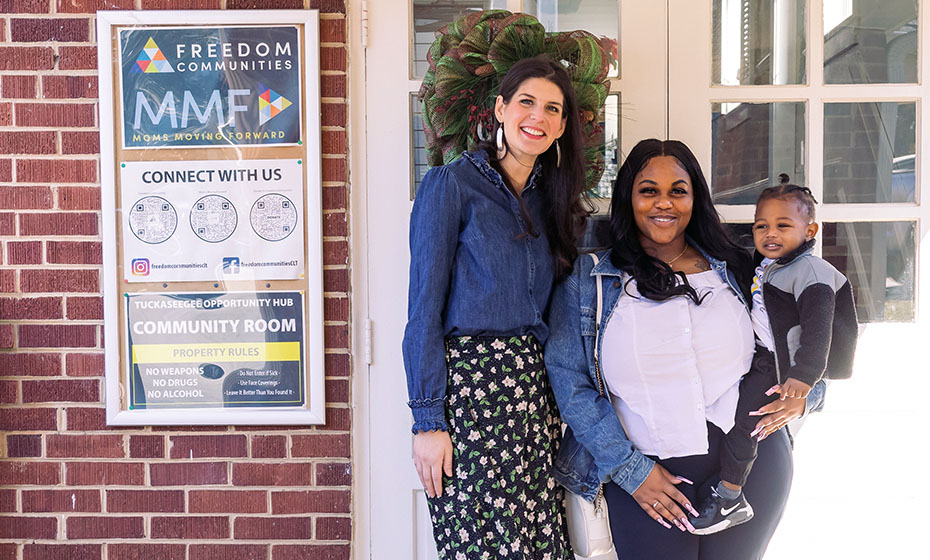 Since 2020, the Duke Energy Foundation has committed more than $8.6 million to social justice and racial equity organizations.

Moms Moving Forward is a 12-month program that helps mothers build a support network, set goals and achieve their dreams. Dade is a member of the sixth cohort Freedom Communities has launched since 2020. Each cohort has 15 women.

“Being a mom can be isolating,” said Hannah Beavers, executive director of Freedom Communities.

“I discovered myself that just putting your kid in the car seat can feel like a monumental effort at times. As a mom, when I saw my peers were struggling with the same things I was, that created solidarity and a sisterhood. We wanted to do that here – create an environment where women could pour into each other, share their successes and struggles and support each other along the way. When they graduate, they have a built-in support network that will last, hopefully, a lifetime.”

To be eligible, moms must live within ZIP code 28208, have children under age 10 and work a minimum of 20 hours a week. They can't have a felony conviction, and need to be a high school graduate or have their GED. Freedom Communities can help them get their GED.

While moms are in the program, they must meet with their cohort and a transformation coach each week. Moms attend required monthly workshops on topics such as mental health, parenting, financial literacy and housing. In addition, Freedom Communities’ youth development coordinator meets with each cohort member every month.

“We encourage moms to save at least $25 a month, and we incentivize them to participate in that significant commitment by paying them for the things they accomplish,” Beavers said. “We serve a lot of people who, frankly, cannot afford to better themselves. If you’re spending a couple of hours a week with us, then you’re losing money by not being able to work during those time periods.” 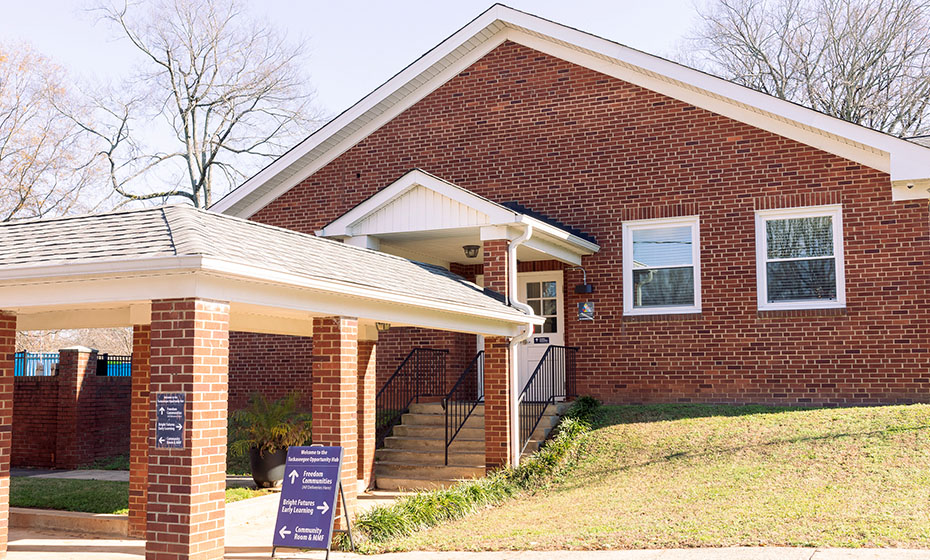 Every coaching session moms attend pays $25; each workshop pays $50. Meeting with the youth development coordinator to set goals for their children pays $25. Freedom Communities matches up to $25 each month of what’s in their savings account. Every four months, it matches up to $225 of their savings. So, moms can earn more than $200 a month just by being part of the program.

So far, 48 moms with 116 children have graduated, Beavers said, and there are 47 moms with 99 children in the next cohorts.

One might assume, said Beavers, that you just need to give somebody a job to lift them out of poverty. It isn’t so simple.

Families with children ages 5 and under can pay for child care with a voucher. “Child care is super expensive,” Beavers said. “It runs about $12,000 a year per child. For a mom with two young kids, if she's making $16.75 or below per hour – which equates to about $32,000 a year – she qualifies for a child care voucher that allows her to send her children to school.”

But if she makes a penny more than that, she loses that child care voucher. The $16.76 an hour she’s making doesn't offset the $24,000 in child care costs. A lot of families refuse to take raises, Beavers said. “They can’t afford to.”

“Our moms are locked into poverty because their wages determine what neighborhood they can live in,” Beavers said. “And the neighborhood we live in determines what schools our children are zoned for, which determines the quality of education they receive. So, we advocate for policy change that will alter that ‘benefits cliff’ and make it more equitable.” 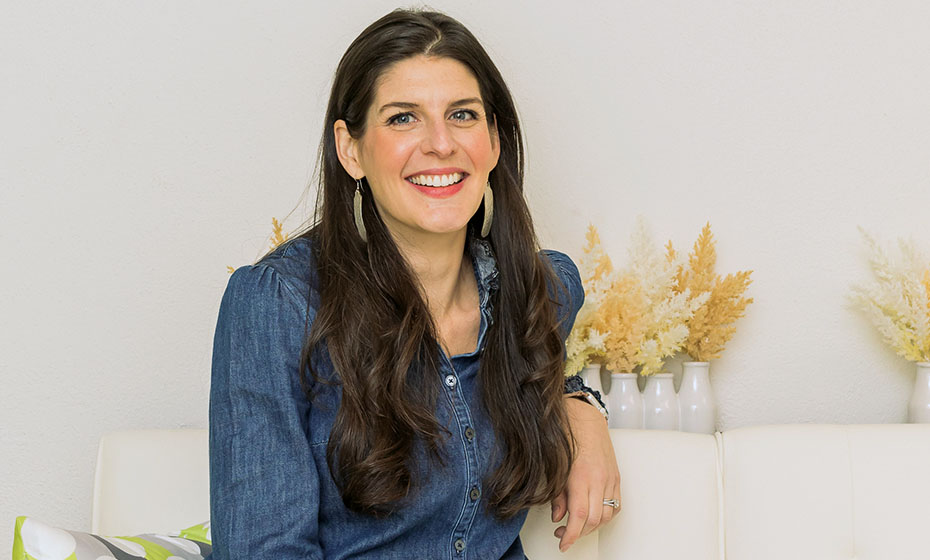 Freedom Communities Executive Director Hannah Beavers: "We wanted to ... create an environment where women could pour into each other, share their successes and struggles and support each other along the way."

“If we can help moms see their potential, increase their wages, connect them to resources, reignite their belief in themselves,” Beavers said, “they can escape generational poverty and the trauma that goes with it.”

Dade said financial literacy classes have shown her the importance of saving. She has learned how to use credit wisely and has raised her credit score by 100 points. She never had a credit card or a bank account. She now has both. And she’s sharing her knowledge with her 18-year-old brother, who recently opened his own bank account.

Dade has had times when she wasn’t sure how she would afford food. Now, she has a financial cushion to help when unexpected expenses arise. She recently had a flat tire and had enough in savings to buy a replacement.

She’s grateful for the mental health workshops, too, which have helped her manage stress and become an even better mom.

Danielle Young, her youth development coordinator, has helped her, she said. “I used to think of reading to Nashad as this systematic thing I had to figure out how to make time for. But my counselor showed me that there are opportunities to teach him all day, every day. Now, when I’m cooking, I explain to him what I’m doing – so he’s always learning.”

Dade recently finished a 12-week training program at Spectrum. She sees a path to becoming a sales manager, but her ultimate goal is to open her own nail salon. She already has her manicurist license, and an urge to give back. “I want to offer free ‘Manicure Mondays’ to single moms and homeless women,” she said. “Everyone deserves to feel clean, beautiful and pampered.”

“Hannah has embedded herself in that community,” Johnson said. “She has the respect of the business community and the people who live in the neighborhood. She’s a white woman in a predominantly Black neighborhood, leading an organization that serves predominantly Black clients, and she’s the kind of person who convenes, listens, seeks input and makes decisions driven by that community.”

Johnson added: "You can’t lift up a community only tackling one problem. Freedom Communities is tackling all of these problems.”

Tykeiria Dade continues to surprise herself by just how much she’s capable of.

“I felt like I let everyone down by getting pregnant so young,” she said. “But my parents now tell me all the time how proud they are of me."