Those three words are all it takes for the lights in Melissa Gaston’s house to turn off and the thermostat to change settings – up in summer, down in winter – saving Gaston money every month on the cost of utilities.

Alexa, a virtual assistant developed by Amazon, also knows to restore the thermostat to its normal setting before Gaston returns home from work.

Gaston’s is one of 33 homes in a smart home pilot project in Charlotte’s North End Smart District. The program is a dream come true for DeAndrea Salvador, a fifth-generation Charlottean who was inspired to get involved by memories of an elderly neighbor from her childhood fretting about how she could afford her monthly utility bill. 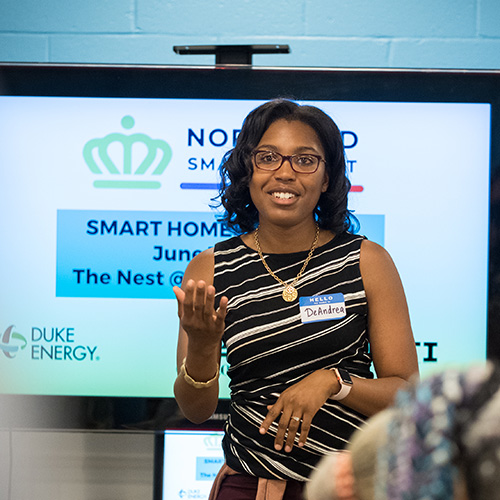 “Her husband at the time had a heart condition, and she was struggling to make sure he was comfortable,” Salvador said. “Just looking at my community and the effect that high energy burdens had led me down the path of research.”

Salvador discovered that to be manageable, energy bills should be below 6 percent of a household’s income, but some families pay as much as 20 percent.

“When people start to pay above 6 percent, they resort to coping mechanisms to avoid energy shutoffs,” Salvador said. “Some scrimp on food, others on health care.”

In a review of 48 major metro areas, the American Council for an Energy-Efficient Economy found that low-income households pay more than three times the amount of income on energy as higher-income households – 7.2 percent compared to 2.3 percent. As many as 35 million Americans, according to Nest Power Project, struggle with high energy bills.

After graduating in 2013 from UNC Charlotte with a degree in economics, she created a nonprofit called RETI (Renewable Energy Transition Initiative) with the goal of using technology to sustainably decrease the cost of energy for low-income families. The city of Charlotte hired RETI to work on the program, with funding from a grant. Other collaborators include Duke Energy, Amazon and Intel. 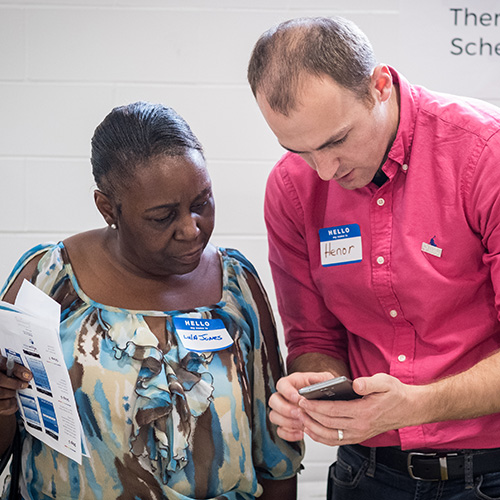 Each household has been outfitted with an Amazon Echo Dot, featuring Alexa Voice Command, and various smart devices: a smoke detector, lightbulbs, plugs and a thermostat. The one-year kickstart program will test how the devices affect energy use in each household.

“What’s been exciting and a little unusual about this project is that we were building the program as we were implementing it, which required us to have a strong partnership with the community,” said Ashley Dempsey, senior product developer at Duke Energy.

The idea for this project started with the community, Salvador said, and began to form as the partners came together.

Charles Burris, who signed up for the program with his wife, Beverly, said learning all the new technology was challenging. Salvador’s own home, which she shares with her husband and two young sons, was outfitted with the same technology. So, if a participant has a problem, Salvador can try to figure it out on her equipment.

“She’s wonderful,” Charles Burris said. “Every time I have a problem, I call her and she points me in the right direction.”

After five months, the residents have gotten to know the Duke Energy technicians well, and vice versa.

“This has been an amazing partnership,” Rob Phocas, director of sustainability for the city of Charlotte, told participants. “The work we’re doing here we hope to replicate in other parts of Charlotte.” 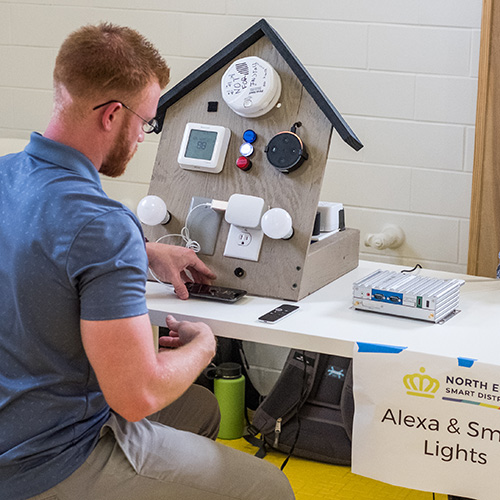 Households in the kickstart program have been outfitted with smart devices: including a smoke detector, lightbulbs, plugs and a thermostat.

John Pressley, who works in digital transformation for Duke Energy, said, “Those who saw the greatest energy savings came from residents who adjusted their thermostats up while they were away and used Alexa routines like ‘goodbye’ and ‘daily schedules.’”

For Salvador, the progress, though slow, has been rewarding to watch. “I feel that this could be the launching point for other programs that the city of Charlotte can do around energy efficiency. These people are pioneers. There’s a level of excitement that comes with that.”

Salvador is also working with Duke Energy on shared-solar outreach in South Carolina. Because of her groundbreaking work, she was selected to be a TED Talk fellow and spoke at a conference in Vancouver, British Columbia, in April. As part of her four-minute talk, she recalled:

“Growing up, stories of next-door neighbors having to set up fake energy accounts or to ‘steal’ energy seemed normal to me,” she said. “During the winters, struggling to get warm, my neighbors would have no choice but to bypass the meter after their heat was shut off just to keep their family comfortable for one more day. … These kinds of dangerous incidents can take root when people are faced with impossible choices.”

Her dream is to provide people with other choices.

Melissa Gaston said the pilot program is doing just that. With the new technology, participants can save money on the cost of electricity without even thinking about it.

“I’m much more aware of what my bill is going to look like and I can plan ahead," Gaston said. "I like my house comfortable and, for me, I’m willing to pay the price to have that comfort. But if there was a situation where I knew my money might be a little tight this month, I know what to do to reduce my costs and how to go about it because of this program.”